original: http://benwootten.deviantart.com/art/Blue-Dragon-118573148
Personal Info
Name: Alysha
Nickname: BlueArrow
Age: 24 human age more or less
Gender: female
Personality: she is loyal and serious, she is inteligent, and hide her emotions very well
she can turn violent but just if is the case to use the force, and she is also diplomatic, she is quite self-confident too
Interests: she usually like to hunt challenging herself about her speed, she don't mind to meet other dragons, and she want to learn more about almost everything
Dislikes: unfair things, innocents in danger, being see in the wrong way by the others
Fears: to be trapped and to be tortured

General Appearance
Height: she is tall enough, medium size i would say
Scales: her scales are sharped and pointed, blue, skyblue and metallic blue, a bit of silver on the throath and belly
Eyes: skyblue and can be darker
Appearance: she looks like a normal dragon, her legs make her taller and also her long neck, she have spines on the back and horns, her color help her to hide in the sky
Tribe Information and Status
Tribe: Skywing
Rank: Skywing Tracker
Family: Long story
Mate: None
Hatchlings: None

Skills and Abilities
Strengths: she is very fast and smart, and plains strategies
Special Abilities: she can eventually create a shield with ice or condensed air, vapor and fog to confuse the enemy, and also release a beam of concentrated air to confuse
Weaknesses: she is vulnerable to fire but also to the other special attacks
Combat Style: she try to use strategy, she thinks very well about what to do befor to do it. Attaks in nosedive from no where are her speciality

Background
History: I will write something and probably will update this during the roleplay
RP Sample: I'll put an example sooner as possible 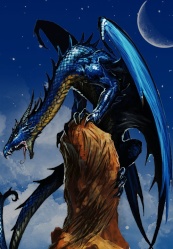 I think Kokoro would accept you once his back "Sleenia"

Well, since Phan isn't here, APPROVED! You could be a tracker! Arcke needs help

just one tracker? mhh ok then