» Àlamei, of Lightning and Flame
by Àlamei Today at 9:58 am

» Something to Care About
by Abbadon Today at 6:32 am

» Burner: The Fire Healer
by Baldirak Che'le Yesterday at 10:19 am

Top posting users this month
Who is online?
In total there are 14 users online :: 1 Registered, 0 Hidden and 13 Guests

Fishing in the Dark (Seawing)

Fishing in the Dark (Seawing)

In the depths of the ocean, a blue/green glow marked out a small region of the seabed. The long, serpentine body of Minnow sat their, snapping at any of the deep sea fish that decided to come close. Thankfully her glow tended to attract fish. The Seawing just hoped she could get something to eat, and maybe some extra to bring to the other. Vann, Bass, the Icewings. There weren't a lot of any dragons left, so even though she wasn't a hunter by choice, she kind of had to be. So she waited for more fish to come, letting her glow be a lure.

The night had a truly clear sky, the ocean doing good to keep nearly calm to allow the stars to paint it's blue mass. The moon was but an orange giant across the sky, menacing and to many it brought an evil omen. But those who disregarded the superstition would appreciate it's dimly warm-colored glow compared to the bright sun. Regardless, the moon was quite bright on its own and those who knew well it attracted fish. That was what a particular dragon was after, even more than fish like whales and ships, primarily anything that is edible. Nowadays, hunt on land became scarce due to a certain infestation, the extinction of dragons was to come to a close... soon. With the diverse SeaWings gone, very few true dragons of the great seas remained, one of which was the reclusive Bassasail.

Though in truth he'd been one of the only Sea Dragons left, the fact of the matter was that he went in hiding due to the creatures on land. Staying in his little cave on one of the small islands, Bassasail had come across very few of his kind more frequently as they normally spent more time in the ocean. Still he fought less frequently on land as most monsters couldn't swim, juvenile Great Serpents and avian creatures travel all that way to nest but they have all failed. Mostly anyway, as some of the bird species have roosted in places Bassasail wouldn't consider trespassing. He swam for hours, feeding off of a pod of orcas, he was now diving deeper to find much larger prey. Preferably blue whales.

Scanning the lower depths the great dragon spotted something, barely but large enough to catch his attention. It was an odd glow, something moving slowly of green and blue colors. He knew some dragons had that glow, though he'd been hunting with few granted it was out of character for him, Bassasail wasn't entirely sure if it was a new breed the creatures above had spawned, a dragon or perhaps an odd... happening. Carefully, he dragon charged up a small blast of neon blue, glowing slightly brighter than the thing below and slowly swam toward it.
_______________________
Bassasail, SeaWing Guardian
Attor, Starlight Sovereign
Gemna, The Last IceWing Scholar
Ragnarok, EarthWing Adviser
Abbadon, Hildrhilts Hatchling
Incus, Demigod of Fire
Malek, EarthWing Scout
____________

Minnow continued resting on the bottom, looking for any fish until she saw another glow. The sea dragon coiled a little before deciding to swim a little closer and check it out. She unfurled her fin-like wings, the webbing glowing, and began to swim closer. It didn't take long before she realized it another dragon. She smiled a little, swimming close.

So far down in the ocean the sunlight is a soft diffuse glow. Those once golden rays from above are only blue in this water and the deeper Erebus remained the less light could penetrate. The rocks are but silhouettes in the dim. The light from Erebus's blue bio-luminescent barbels slowly becomes the only reliable light source. In his anxious state after his flight from the Ebonwing Isles, time to time Erebus is surprised by a lone fish attracted by his barbels, invisible until it enters the feeble light causing him to dash a short swim in his own fear playing tricks on him. continuing to lower himself to the Ocean floor, Erebus could feel the temperature of the water drop. It wasn't like a winter chill, bringing a shiver to his scales, but more like the welcome coolness of an autumn breeze.

Erebus after continually reminding himself that he was free and safe down here from any Nightwing patrols felt comfort once he collected himself from the pure waters. Down here Erebus reminded himself that he was free to turn and move as he wished, the ties of gravity faded to nothing away from the surface and the many harsh realities what dominated his previous life on the Isles. As he slowed down his swimming pace after collecting himself and feeling the ease of freedom he sat doubled up in his place, staring at an ever changing panorama. A rocky wall, not twenty feet from him, stood up like a sky-scraper, straight and tall. Here and there it was broken by fissures and caves. Everywhere it was festooned with sea vegetation, seaweed, kelp, anemones. All these, with coral that rose like the architecture of one of the Dragon Capitals, they were entrancing.

Only after his attention was broken from the encapsulating movement of the sea floor and its life by a distant sound, did Erebus drop to the seabed, pressing his body against the sand and the vegetation as he made the bio-luminescent barbels dim and remove the light, with straining, craning his neck forward he'd peer from the corals as he looked upon the image of two other Seawings. His heart beat began to race, flutters and anxiety consumed him as he had never seen free Seawings before, he debated what the best course of action would be for a few silent moments before then deciding upon that hiding wasn't the best first impression, mustering his courage he broke free from his coral cover and swam towards the two. Hesitating only for a moment, he spoke out in a weary voice "Erm, hello there fellow Seawings", he regretted the awkwardness of his words as soon they left his maw and he gave out a somewhat defeated sigh under his breath. 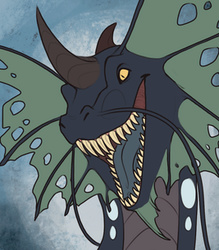 As Bassasail closed in, he noticed a familiar figure begin to take shape. Less serpentine and more round yet slender in width, the length of the creature before was a bit longer than expected. He began to flare the bubbling does from his maw as a warning sign before noticing this was the shape of a dragon. The drakes mind raced as to who it was but the closer it got the more detail could be seen. Many a time he fought other sea dragons and lived through it let it be rival assailants or some crazed fool, but this dragon didn't seem to launch itself in a hostile manner.

That was when recognition hit the drake, He saw the dim bioluminescence of the dragoness as she approached Bassasail with a simple, "Oh! Hello!"

"Oh, it's you." Bassasail said as the raging light of his jaws dissipated till nothing but a very dim boil escaped the teeth. Though he sounded disappointed that it was only Minnow, the sea drake internally welcomed the company... in some manner. He sighed, relieved that there was yet to be a sea monster that could match him but still the thought of sea dragons going extinct was heavy. Years ago the oceans brimmed with them, and now? There were only a handful of them. The antisocial Bassasail had to be social nowadays or whatever was considered, "Social."

"I didn't think I'd run into you-" Bassasail started but an unfamiliar voice caught his attention. Immediately he turned to his right and saw a stranger. Immediately his maw grew bright as the water around him boiled, clearly aggression beginnings to build in the drake. But if he was this dragon dead, it'd be dead. Though Minnow might now show hostility, Bassasail was skeptical of any newcomer, but what was odd was how he'd never seen this specific dragon. At one point, he could recognize any sea dragon by voice or their mere appearance when he was the King of the Seas. If he'd recognize this one, Bassasail wouldn't have been so hostile.

"Address yourself." Bassasail demanded immediately, his tone firm and quick to gain a name. He wouldn't mean to scare them off though since the wave of monsters attempting to invade the islands he called home, Bassasail had to be aggressive in these trying times as he'd dealt with too many rogues from various tribes. All dragons were met with this hostility, king and commoner.
_______________________
Bassasail, SeaWing Guardian
Attor, Starlight Sovereign
Gemna, The Last IceWing Scholar
Ragnarok, EarthWing Adviser
Abbadon, Hildrhilts Hatchling
Incus, Demigod of Fire
Malek, EarthWing Scout
____________

Minnow looked surprised when she recognized that the much larger sea dragon, Bass. He was twice as tall as her when standing, and probably four times her size really. She swam around her fellow Seawing, her long body and tail seeming to almost flow around the larger dragon.

"Yeah. Been trying to get some food." Bass tried to say something else before another dragon appeared, one with bioluminescence like her. It was clear something was up though. Bassasail was quick to become aggressive. She quickly slide behind him, peaking out from behind the crocodile-like dragon. Almost unseen would be watery tendrils that formed behind her. "H-hello."