"Good catch!" A dragon said to himself, hovering above the treeline of the jungle. He and another had been at it for quite some time, hunting and failing each time due to the monsters. But today was their day to bring food home for their tribe. His golden feathers and scales shone brilliantly in the light making this dragon an easy target for predators. It made him an easy target for any creature, dragon and monster alike.

In his two front paws he carried a dead elk in each, bucks that were thick with meat and quite big for their size. His partner, a tan-scaled fellow had caught another elk, a doe, smaller but still provided what they needed. The tan dragon flapped his wings until he became airborne and smiled at his friend, "Thank Kelarth we found some! Three this morning already. Let's search for more!"

As the dragons began to fly off they both stopped at an odd object in the sky shooting toward them with a speed only a SkyWing knew. And a SlyWing it was. The two were ready to fly away from the creature till they saw it was another dragon. They looked at each other until realizing who exactly it was.

In the four weeks it took, today seemed like a good day to go hunting. There were two parties that went for gathering food each of them consisting of three dragons total, but only skilled hunters, not a novice as trouble tend to follow with those. Most were left to fend for themselves and eat what they can with the scarce wildlife, no thanks to the monsters that caused it. It was a miracle that prey were available this time of day, it was a miracle none of the hunters were attacked yet! Attor was a participant in these hunts, it helped him with the depression he had, no matter how sour the hunt gone he was still happy to get out and fly with his fellow tribespeople. This time around he was part of another group that hunted in the Lush Jungles, another he ordered to hunt in the mountains to see what it provided. So far in the past hour he caught two goats a few minutes ago, a great catch compared to the measly few vultures he caught before.

Today felt different, there was a strong wind today that felt good, the sun that was above the horizon was warm and bright, the air was crisp and cool. The Lush Jungle was beautiful from above until one moved to that ugly patch of destroyed wood, a war that sparked long ago during the initial invasion. Attor felt great, he was thankful to Kelarth that he got to be this free, free from the old politics, free of the stresses of thousands. Sure they didn't have to die but he held no more sadness over them but they weren't forgotten. Not by a long shot were they forgotten, as once they have a manageable force the Order of Starlight's can truly bring order to the SkyWing and LightWing lands. For now it was settling within the mountains, biding time and rebuilding everything.

Attor flew toward his group, the two dragons holding a total of three kills. Good, very good, that meant there was fresh food for the tribe and bellies won't go empty. But to make up for the lack of food for weeks he'd have to hunt throughout for the next few days just to keep bellies decently full. Technically, he was part insect, he could thrive off plants alone but there was a fullness meat provided. Attor flew at full speed with pride that he actually caught something not small. He held up the two dead animals to the other dragons, showing off his prizes.

"Caught these two in the cleared space, they'll provide for the young." Attor stated happily, earning nods from the other two.

"Aye, I suppose these biggens are going to adults?" The tan dragon asked.

Attor nodded, "Yes, we'd have to make up for the lack of food, catch as much as you can today, I don't care if it's an excess amount. I don't want a starving tribe eating each other."

"Yes sir!" The tan dragon said, agreeing strongly with his lord, "And if we run into trouble?"

"Like I said before, you're fast enough to escape, keep all eyes peeled for danger, survivors and prey." Attor replied firmly.

"You're not joining us?" The gold dragon said with a curious expression.

Attor shook his head in reply, "No, which is why I'm here. You can use your maws to carry these two. Be swift and fly all this over back to the tribe. There's something I need to check."

The sovereign allowed the two larger dragons to take the goats from him, biting down to get a firm grasp so they don't drop the food. They both curtly nodded before taking off to the opposite direction, he was certain they'd be fine without him sticking around. Attor was finally alone, by himself with no one else. He sighed heavily then inhaled, taking in the scene before him. Not even the Earthen lands were this beautiful, a jungle with a hoard of mountains in the distance. Attor wandered how Ark had created such a sight. But turning to the East he knew there was business to attend, and he wasn't going to be held up by any beast no matter the manner. Attor was going to head to the old SkyWing Kingdom, it's castle, ruins and all.

_______________________
Valcroaza easily defeated Attor in size, yet, he was defeated himself both physically and emotionally. And he roared in frustration, slowly dying from the poisons and wounds, "How could an insect like You overcome a Lord?! I am Valcoaza, warmonger of the Rouges!!"
Attor laughed at the big dragon, walking towards the fallen creature as he prepared the stinger at the end of his tail, "You had the strength, might and size no doubt, what won me the war my friend, was speed, stealth and patience. You would have certainly won had you not been arrogant enough to try and torture and taunt me, taking your simple time to finish what You started. I won because of your mistakes, I won because you grew careless and sloppy, thus meeting your end." 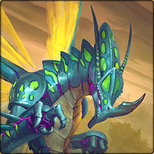 When he saw that the other two had returned without the king, Haneul scolded them severely and fly off to find him. That's all we need, Haneul thought as he flew through the dense jungles in search of Attor. Our clan leaderless because those two idiots decided to obey orders and leave the King alone. It didn't take long for Haneul to find the bigger dragon. He knew every inch of both territories now and half SkyWing king wasn't that hard to miss. "Where are you going, sire?" Han asked as he caught up.
_______________________
My alts: Baldirak: Prophet of the Goddess Astral/EarthWing King. Tulvir II: FireWing Guardian. Aerouant: Rogue Demi-god. Kelarth: God of Fortune.Vann: SeaWing Guardian. Vilkas: EarthWing Demi-god. Atarijor XVI: IceWing Healer. Raak-tolIs: LightWing Citizen. Ptelea: Rogue. Servius: Manticore. Svadilfare: Human. Elara: Dragon-Human Demi-goddess. 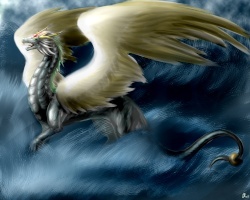 "Ah! Hanual, I suspected you'd come along. Can't have a king without his vanguard now can we?" Attor responded amusingly, about ten minutes of flying in this glorious weather and he'd at the edge of the SkyWing territory in no time, "This time around I'm heading to the old SlyWing ruins to retrieve a few things, but I also wanted the day to look at something."

Attor was a bit vague about what was looking and retrieving, everything was a surprise lest it be serious. He was an odd dragon indeed and liked more character than simple acting to be liked. Respected or not, this sovereign only cared for his people and wanted the best. This trek he was going on was to help him understand more, gain knowledge abd bring back old scrolls and artifacts if they weren't destroyed.
_______________________
Valcroaza easily defeated Attor in size, yet, he was defeated himself both physically and emotionally. And he roared in frustration, slowly dying from the poisons and wounds, "How could an insect like You overcome a Lord?! I am Valcoaza, warmonger of the Rouges!!"
Attor laughed at the big dragon, walking towards the fallen creature as he prepared the stinger at the end of his tail, "You had the strength, might and size no doubt, what won me the war my friend, was speed, stealth and patience. You would have certainly won had you not been arrogant enough to try and torture and taunt me, taking your simple time to finish what You started. I won because of your mistakes, I won because you grew careless and sloppy, thus meeting your end."