Disclaimer: Artwork is NOT mine, full credit goes to its artist!
Type of Character: Dragon
Link to Character List Page: xXx
Personal Info
Name: Perula
Alias: Pearl and Opal, though if she were to be called ‘albino’ the offender would be met with a swift swat
Age: 340 years
Gender: Female
Sexuality: Heterosexual
Personality: Perula is quite a calm and caring creature, her affinity for hatchlings ringing beyond any of her other qualities. She is rather confident despite her appearance being a main topic in every other’s mouth, though this is quite a sensitive subject. She is quite sassy and can be refreshingly playful when she needs to be but prefers to remain serious and calculating when she knows it is time to be.
Fears: Perula’s main fear is being found by humans, of whom she was sure would enslave her purely as a show piece due to her rarity amongst the Earthwings. Reasonable and rational, she also has a fear of becoming stuck in a crevice or cavern that she is able to squeeze herself into and not being able to get herself out, so one could say a mild case of claustrophobia .
Strengths: Mentally sound and balanced cause her to remain levelheaded and calculating when in an affirming situation. Very good at both defensive and offensive attacks, she is a formidable foe to any she may encounter. She is an expert healer, having started her training very young and is acquainted with old and new methods of dealing with ailments.
Weaknesses: Because of her white scales, she has a sensitivity to light, causing her to burn easily in the sun and in turn draining her energy if she is out in the open for too long. She also is an easy target for any opposing force. She does not have the ability to sneak up to a target. She is also extrememly vonerable to light attacks as well.

General Appearance
Height: 100ft
Scales: Her scales are purely white and rather small but very strong. She looks a lot like her mother physically, a trait she shares with her estranged younger sister, Hildrhilt.
Eyes: Pinkish Gold
Appearance: Physically, she is slender and toned, showing her years of hiding out and merely keeping a close eye on her own safey, her slender frame allowing her to move quickly. Her wings are large and strong to carry her large body and her jaw and throat are lined with sharp spines to deter any bites to the vital area

Skills and Abilities
Normal Abilities: Earthquake Roar (Cat. 3 affecting two miles), venomous bite, Acid Breath, and Earth manipulation.
Special Abilities: Earth Summon: Able to rise two large, fifty foot pillars of rock from the ground as a deterrent for attackers, can only be used once and is severely draining of energy for her, unable to regenerate until after six posts.
Combat Style: Though Perula does not like conflict and tends to lean more toward the passifist mannerisms, if she is forced to fight she prefers to be on the ground, able to protect herself more than in the air.

Background
History:
Perula didn’t lead an easy life, being born an albino. When her mother hatched her, she quickly sent her away under the protection of her grandmother so that she could be trained by her to be a healer, the only job that would be acceptable and realistic from a solid white dragon. Though her mother was afraid for her eldest daughter’s life, Perula’s grandmother told her to never be ashamed of her lack of coloration, as it was unique and a symbol of a pure heart. Perula battled with insecurity for most of her life but it was quickly resettled back within her mind by the wise words of her grandmother.

When Perula was 100 years old, she learned that her mother had died and left a small dragoness behind but there was nothing that Perula could do for her half sister, her rank reventing her from being able to assist though she wanted to. Perula simply watched Hildrhilt from afar and made sure she didn’t get into too much trouble, marveling at her sister’s beautiful grey coloring. After a while, she left Hildrhilt to her own devices and began to lead her own life, keeping a close eye on her sister nonetheless.
RP Sample: 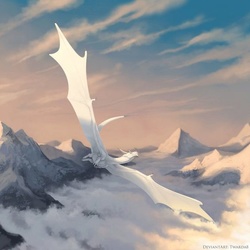