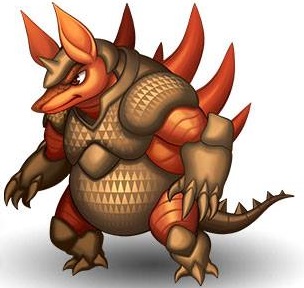 Type of Character: Dragon
Link to Character List Page: http://www.rpgdragons.org/t5007-jurragon-s-character-list
Personal Info
Name: Galeon
Alias: Stalwart, Coward, Junior
Age: 2,000
Gender: Male
Sexuality: Not interested
Personality: He is, by most would consider, a pacifist by nature and finds fighting to be a last resort. While a bit ironic given his size and armored form, Galeon feels fighting is a pointless effort at times that stands in the progress of peace. In a perfect world everyone would get along, but it would be a boring one he'll admit and while he doesn't preach nonviolence, he prefers the nonviolent approach to most obstacles, but does understand the need for self-defense.
Fears: Drowning, Being alone, Useless
Strengths: Heavily armored durability and endurance, can curl up to cover even his weak spots and can roll in said form, excellent hearing.
Weaknesses: Slow when not rolling and his attacks, while hit hard, are very easy to predict and dodge. Keen hearing is sensitive to loud sounds, blind, and is not a very good swimmer.

General Appearance
Height: 80 ft. tall
Scales: Green underscales and brown armored scales.
Eyes: Pale
Appearance: The above picture gives a good reference to his appearance with key differences. He is mostly bulky, with a bit of a potbelly, and well muscled even for his age with a short tail. Much of his chest, from shoulders to waist to back to top of his head, along with his forearms and forelegs are covered in dark brown armored scales. The rest are softer, light green under-scales for the parts not covered by his harder scales. His head is a cross between that of a dragon and an armadillos, with long ears that tend to perk up and a somewhat long snout that is wider with sharp teeth. Though over time wrinkles had begun showing, his ears droop, and a short grey beard grew, clearly his age beginning to show. And there are no spikes on his back either, along with having no wings.

Skills and Abilities
Normal Abilities: He has the normal abilities of being an EarthWing.
Special Abilities: Can roll into a ball to cover all of his weakpoints along with being his most strongest in terms of defense. He can roll around in this mode of travel and go up 40 mph on land, depending on the terrain. While in said form he cannot attack, unless he rolled into someone, and his hearing is deafened while curled up. As he got older though he can't stay curled up indefinitely as he did when he was younger, due to his joints acting up and so can only stay curled up for 5 posts. Having to rest for as many posts from how long he curled up once he uncurls.
Combat Style: He fights battles of attrition against opponents he's forced to fight, mostly only curling up if he needs the extra defense and if he needs to make a quick escape. Otherwise, he will hold his ground and fend off attacks thrown at him, waiting for the moment to counterattack.

Background
History: Left as an orphan, either by choice or other circumstance, he had been left alone in an abandoned cave and been born blind. Only by sheer luck did a passing EarthWing take pity on the strange dragon that he had a chance and so found a home with the EarthWings. His childhood growing up had...not been the greatest, considering his strange look, blindness, and the lack of wings, along with his persistence in not fighting back. As such, some of the other young ones began calling him a coward instead of the name given to him by his foster parent and bore the insults without a word.

Years to decades passed as he grew and trained, becoming surprisingly tougher then some of the Guardian trainees he trained with. Even while shorter and being blind, his natural toughness and keen hearing gave him an unexpected edge. Until finally becoming a full-fledged Guardian did he gain some reprieve from the passing insults. This did not last long as all things did, with a whirlwind of events; from the humans invading, to his father being killed in front of him, and finally the monster invasion, he's surprised to still be even sane after all this. Through all that he stood standing, the stalwart guardian he had trained to be from a young trainee to grizzled veteran, he stood and weathered the storm as he always did. Though always sad as his fellows fell beside him and yet he remained, always wondering when his legendary defense will finally crack from time and soon join with his fellows on the other-side. Until such a time came, the aging Guardian only knew to do one thing, protect his tribe from any and all dangers until he finally fell, either from battle, or succumbing to old age.

RP Sample: Jurragon Ignis, one of my alts. 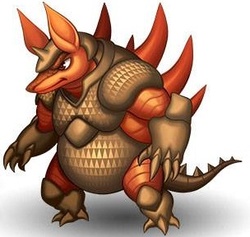 Now, please note that while you have creative freedom for appearance, a dragon character should still favor a dragon. So while his head can be armadillo-like, it should still read dragon. Might help if you said the picture was just a reference to give a general idea of what he looks like, because to me, this "dragon" is basically just an armadillo with a couple dragon abilities.

Speaking of, on to abilities. His ability to roll into a ball should be a special ability, as this is not something dragons can typically do. Being able to roll around at speeds of 80-100mph is too much, especially since it appears he can remain curled up in a ball as long as he wants, and while in a ball all of his weak spots are completely covered. His roll speed should be reduced to the EarthWings' max flight speed of 40mph. You mention he tends to spit dirt instead of rock. Like, dirt dirt, or mud, because I don't think dirt would be very effective unless it was like, point-blank or something. I imagine it would be like flour getting tossed into the air, messy, but doesn't really do anything in terms of blinding you--unless in just happens to go right in your face from a close range, and mostly at your eyes. Maybe just still to rock.

And side-note, are the spikes on the back in the picture present on Galeon as well? Whether they are or aren't, you need to specify. If they are, for one thing, it would further reduce your roll speed. By the way, make sure you move the weaknesses regarding his ball form to special abilities, since they are related to that as opposed to being an overall weakness.
_______________________
Astral's favorite person. ^.^

Better, but.. hm. I feel like he should have another weakness to his special ability, since there is nothing stopping him from just staying in ball form. Maybe with his older age, he can't stay in it indefinitely like he did when he was younger? Or maybe his scales aren't as strong when in ball form?
_______________________
Astral's favorite person. ^.^