Double Trouble (Open to All, Located in Twilight Imperium)

Double Trouble (Open to All, Located in Twilight Imperium)

A small rabbit hoped along calmly, munching on some grass every now and again. Seemingly unknown to it however, someone was following it. Well, two someones. Cyclone and Typhoon both smiled, licking their lips. Admittedly, they'd probably argue over who would get to eat it, but they needed to learn to hunt, and with their mom, Sting, being busy, they decided to try and figure it out by themselves. The two hatchlings' tail wagged a bit before they pounced for it, ready to catch the rabbit in their claws.

The pair growled, looking in their paws to find.... Nothing? The twins heads darted up and around until they saw the rabbit getting the heck out of there.

"Darn it! We'll never get this down!" 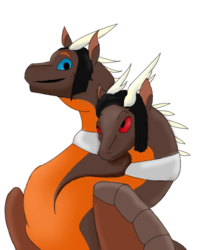 Re: Double Trouble (Open to All, Located in Twilight Imperium)

Tharasis was walking through the forest. Since he had met Sting and her children, though he was at first a little hesitant with them. Having no prior knowledge of taking or handling kids, he had come to like the two dragons. Yes they were fused together in one body, but they were still two different dragons.

When he heard Sting would leave for something important, he took the opportunity to watch over her kids during her time away. He was both exited and nervous since this would most likely be their first time being together without the presence of Sting.

But Tharasis had nothing to fear, he knew they were kind dragons. And he knew he would be able to bond with them. He just had to be patient and let them get to know him better. And once they trusted him all would be well for the drake.

Now here he was. In the forest accompanying the two as they went hunting. And the moment he turned his head around they were gone. Much to his utter shock and disbelief at how easily they could disappear. He quickly set up running and dashing through the forested area, The twigs and branches snapped under his weight as he was more worried about the two then making noise.

Eventually he did find them, to his relief they were perfectly fine. He was about to call out for them when he noticed they were preparing to catch a rabbit. And so, he decided to just sit down on his hunches and wait for them. From where he sat he could clearly see them.

He was cheering in his mind as he saw them get ever so closer to their prey, and when he saw them pounce it was already to late. From what he could explain they most likely took to long and the rabbit eventually either saw them of caught their scent. Resulting in the failed catch when the twins pounced.

He let out a soft chuckle seeing them, they reminded him of his own young self. But his situation was far different from theirs, while they had a loving mother to take care of them. He was all alone by himself, and as a result he had to learn everything he could. He didn't have anyone to teach him, so he had to learn through trial and error. And a lot of times this would end in him hurting himself in the process.

But it was through these hardships did he grow into the dragon he was today. But he had to admit, Typhoons and Cyclones childhood were far better than his.

Re: Double Trouble (Open to All, Located in Twilight Imperium)

The pair sat there for a second, their body seeming to twitch and move a bit strangely before Cyclone turned to see Tharasis.