Zylah Youngest Daughter of the Archon

Zylah Youngest Daughter of the Archon

Personal Info
Name: Zylah
Alias: N/A
Age: 14
Gender: Female
Sexuality: She sees the boys her age as too short sighted to have any interest in them plus not hanging around them helps her innocence act.
Personality: Zylah is extremely fond of her father and confides in him with everything. He is both her father and her hero, her ultimate role model. She is as cunning as her father and as tenacious as her mother. She is interested in all the drama and politics going on behind the scenes but also takes great care to preserve an act of innocence. To everyone she is a sweet and curious little Nightwing who doesn't seem like she should be her fathers child nor her mother's if anyone suspects who that might be. The child Tenebris doesn't deserve. To her father sister and to those she considers very close friends she doesn't bother with the act at all.
Fears: Zylah has two main fears. First she fears her act being widely exposed. It was ruin her reputation and bring shame to her father. Second anyone learning her so well they can predict her. If they can predict what she'll do and how she thinks then they are a danger. She likes being in control of the situation whenever she can.
Strengths: Social Engineering
Weaknesses: Making friends. She has a very hard time relation to or keeping close friends as her fears tend to push away anyone who gets too close. She purposefully inflates her ego in order to try and hide her insecurities which in a cycle creates more insecurities in the end making her more predictable to anyone who can figure them out.

General Appearance
Height: 20 feet
Scales: Predominantly Obsidian Scales with purple scales on the legs, chest, horns, and underside of neck.
Eyes: Purple Eyes
Appearance: Zylah is primarily a very deep black that refuses to let any light escape. Her wings constantly produce an equally dark shadowy like substance. Similar to the mother she inherited the unique trait from it responds to her emotions. When she is riled up it can completely fog up a small room. When she is relaxed and calm it barely leaves her body but is still apparent across the surface of her wings. In great contrast to everything she has purple scaled areas reminding everyone she isn't a typical dark and brooding Nightwing.

Skills and Abilities
Special Abilities: Zylah can convert her entire body into a shadowy and misty like substance. This can allow her to retreat or fit into places her body normally couldn't. She can avoid harm but also can't interact with anything in this state. She can only currently hold the form for a total of one hour in a single day.
Combat Style: "Dad! I think they want a tour of the dungeon."

Background
History: Zylah is the result of a a passionate scandal between The Twilight Queen and Tenebris. Kenina avoids all contact and keeps her connection secret being immensely worried about Baldirak ever finding out. Any rumors that might start to circulate she will quickly and quietly eliminate.
RP Sample: Optional 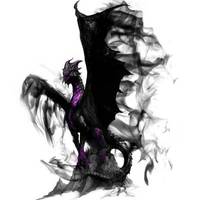 Re: Zylah Youngest Daughter of the Archon

Re: Zylah Youngest Daughter of the Archon