The Wyvern had never known a decent night's sleep. It didn't seem that that should change along with his life. The fifteenth son of Atarijor I had been plagued by nightmares since he was found by the IceWings. He had one last night. This time, it caused his frail mind to revert back to its captive state. Atarijor XVI had been slowly but surely making progress over the past few months. He was learning the Draconic language and getting better at it. Today, that would not be evident if the Wyvern had the opportunity to say anything. Atarijor usually stayed in the mountain hideout, but today he ventured outside. Driven by his memories as a slave, Atarijor sought out humans, any humans, to give him work so that he might eat. The Wyvern, who once had never known flight, flew across the frozen landscape. He flew to the southwest, toward the human city of Brysur... not that he knew this was its name, nor that humans lived there. He landed at the edge of the rogue territory--though with the monsters reigning supreme at the moment, it was all rogue territory--between the SeaWings' native land and the FireWings'. He wanted to walk for a while, to prepare for his work, work that surely not require him to fly.
_______________________ 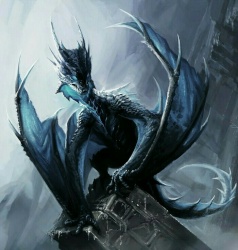 Anyone within two miles of Hildrhilt would hear, if not feel, the altercation she was involved with. Hildrhilt’s growls and hisses would be an addition to the rumbling of the ground from her tussle with an Ogre, her sharp teeth digging into its tough hide to toss it aside, it’s vocalizations thundering through the silent forest around them.

Hildrhilt bore a nasty, deep set of gashes upon her left front leg, favoring it greatly as she held it off of the ground. As the Ogre charged angrily at her once more, its speed was reduced due to her long fangs doing damage to its vital areas yet it refused to die. Anger replaced the fear within Hildrhild’s core, her hazel orbs flashing as she growled, waiting for the Ogre to get close enough. Once the monster reached her strike range, she snaked her head out, mouth wide, to grasp the Ogre’s shoulder within her strong jaws. She reared onto her back two legs, lifting the Ogre with her before slamming the monster into the ground, pinning him under her left front leg. She then began to pull, gripping the battering monster as hard as her jaw would let her. The fist of the creature beat at her jaws, causing shooting pain to nearly become unbearable, yet her anger and the adrenaline from the encounter caused her to hold her ground. The force of her front leg upon the creatures pelvis not only crushed the area, but helped in her attempt of ripping the thing in half. When she felt the monster stretching, she felt the battering become less and less as it released pain filled gurgles, her growls mixing gave it an interesting sound. Her leg screamed in pain from the pressure yet she continued until her head flung back in the success of her attempt.

Hildrhilt tossed the top half aside before stepping back, immediately lifting her left leg to soothe the pain that radiated through her body. With an agonizing sigh, she limped a safe distance and lay down. Her ribs hurt, her left leg was cut and definitely hurting, her left wing was tender, and her jaw on both sides were killing her. Hildrhilt’s breath was labored and heavy, turning her hazel orbs to her left side to look at the severity of her wound. It had definitely been deeper than she had thought but not nearly as deep as it could’ve been if her scales weren’t so thick and strong. She then began cleaning the blood of the Ogre off of her, the taste causing her lips to curl over her teeth. Such foul monsters.

Atarijor heard the sounds of a struggle. Felt them, rather. But he was not keen to go check it out. It reminded him of the Arena, the sounds of a Dragon in peril. He didn't want to be chosen to fight in the next battle; it was better for him to stay away. So, he continued on his present course. But a short while later, he came across a female Dragon. She looked severely injured. Because of his current mental state, the first thing that came to the Wyvern's mind was not to try to heal her. He approached, cautiously, and said as quietly as he could, as if he thought someone were listening--and in human tongue--"Can you work?"
_______________________

Hildrhilt curled her tail around her haunches as she settled onto the soft earth, the smell of dirt, blood, and the stench of the Ogre an interesting combination as she continued to clean herself. Soon, another scent caught her nostrils and caused her to lift her gaze, the astonishment clear in her eyes as the Wyvern stepped into the clearing.

HIldrhilt blinked slowly and lifted her head to take in the creature’s full form when he spoke, the words foreign to her ears as confusion set in. Hildrhilt attempted to make sense of his words and wondered just how hard the Ogre had hit her head, maybe he had knocked something loose and she could no longer understand her own language. She chose to remain silent, hoping the creature would speak once more, blinking slowly as she began to slowly stand. Her wing may be tender but that didn’t mean she wouldn’t fly away if she had to.

When the dragon didn't speak, the Wyvern moved closer, and repeated, "Can you work?" Masters won't be happy if you don't work. But Atarijor can help. Atarijor is good at work." Once more, he'd spoken in human tongue. Then he went around behind her and tried to nudge her to get her moving. If they just stood around doing nothing, the masters would get out their whips.
_______________________

Hildrhilt watched as the Wyvern moved closer, her head slowly leaning back in a surprised manner as the creature spoke once more, causing her to sigh softly. She must have bumped her head pretty hard if she couldn’t understand this dragon looking creature. Why did he seem so concerned? Was someone nearby?

As she watched the Wyvern move behind her, almost flinching at his gentle nudge before standing quickly. Her nostrils flared as she took in the air around her before turning her attention back to the Wyvern, “I...I’m sorry, but I can’t seem to understand anything you are saying to me.” She said quietly, leaning her head toward him as though getting closer would make sense of his words.

Hildrhilt stood on three paws, still favoring her front left, as she contemplated what she thought was a question judging simply by his tone. Who was ‘Atarijor’? Was that whom he was so concerned about? Hildrhilt flexed her risen paw, the muscles stiff and injured yet she knew that it was not any form of major damage if she could still move her claws. Hildrhilt turned her attention back to the Wyvern and awaited his instruction, she knew that he could at least attempt to keep her hidden from this Atarijor being.

Atarijor had no clue what the dragoness just said, either. In his current mental state, the dragon language was as foreign to him as the human tongue was to her. The Wyvern tilted his head, trying to make sense of the words. In his mind, a switch was flipped. When Atar spoke again, it was in dragon's tongue, though it was a very broken dialect. "Wyvern doesn't.... under stand. Atarijor... will help.. yoo (you). M-Masters will... b-beit (beat) yoo (you)... if no w-work."
_______________________

Hildrhilt watched the Wyvern curiously as he seemed to struggle with something. What was wrong with this drake? She asked herself as she tilted her own head in response to his. She was utterly lost as to why he was out here in the middle of nowhere for one and the second, why she couldn’t seem to understand a word he spoke.

When the Wyvern spoke, Hildrhilt stared blankly at him for a moment, flicking her tail slightly before narrowing her eyes in confusion, “Master? I have no master.” She said before shaking her head, righting it in the process, “So you can help with this?” She asked, lifting her leg a bit further in reference. What was a master? And why would he say it would beat her if she didn’t move? Hildrhilt was completely lost but she figured she could trust the drake, seeing as he was the only one around and her leg had an open wound on it that needed a bit of attention.