in the forest near Anthropinos there was about be a meeting of many people.

darvik was out hunting a big beast that usly take four people to take down.
it was bigger then a stag and fatter then a bull what darvik was hunting was a bear
for dinner and for the hide to sale when he goes back into a city or a town. usly darvik doesn't hunt bears unless he need the money to repair his items when ever he moves to a new spot if he thinks endanger of dying where his at.

and this where the meeting started 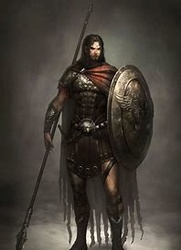 Nari Taloe was irritated. She hated not being able to travel on the main roads freely. A few oversized dogs or whatever had killed a few weaklings, and now a trip from Kakos to Brysur could take almost a month. She was the best assassin to ever be bred in Gynaikes. She feared no thing or person, even other assassins could not faze her. It was only her desire to die on her own terms in the place and time of her choosing that kept her from saying to heck with it and staying on the main roads. If anyone tried to claim otherwise, she'd kill them. The woman looked down at her rumbling stomach as if it disgusted her. She reached into her saddle bag and pulled out a piece of smoked meat. Her horse knickered, as if to say, "I'm hungry, too". She produced an apple for her.

Nari was on her way to Anthropinos to collect her payment for yet another successful assassination. She wondered if Svadilfare had been through there lately. It had been a year since she'd seen the Kryoan and before that, not since his wedding. The woman was shaken from her thoughts when she saw a rather tall man stalking through the trees. "Hmm..." She coaxed her horse into turning and followed him. "What are you hoping to sneak up on?" She asked, recognizing his hunter's stance as he moved.
_______________________

darvik jumps at the voice and turns around with a serrated arrow notch into bow pointed at where the voice came from "who are you and how you find me " darvik seems really surprised and a bit defense with back to a tree so he would.t be sneak up on

The woman laughed, both at the man's reaction and question. It was a dark laugh, the sort of laugh of one about to kill someone begging for mercy. She brought her horse to a stop beside the hunter and ran a finger along the arrow he had dared to point at her. "I am Nari Taloe and it is not hard to see one as tall as you traipsing through the woods. Have you ever had any success as a hunter? Or are you just out here for target practice?"
_______________________

" I.m usly successful considering am always hunting bears and wolfs for the pelts and im darvik bloodfallen " and is.t intermediated by the laugh
has unnotch of bow."so what are you doing in this part of the woods don't you know there are bandits and other monsters" has no idea she a assassin.

The Gynaikes woman scoffed, "Do I look to be the sort of woman who is feeble? Bandits... please. They run at the sight of me. They offer me the coin they have taken from others in the hopes I'll spare their pathetic lives. As for these monsters..." Nari got her horse moving again, circling the hunter. "They are formidable for simple beasts. Make no mistake, they are not a match for a woman that hails from Gynaikes. I just can't waste my time with them. Now, what are you doing in this part of the woods. Surely, you are aware of the bandits and monsters about?" The woman threw his question back at him.
_______________________

looks the women in the eye" you think that every thing runs from you nari taloe and am here because what the point in try to find love when your city doesn't welcome back those who where in the army" grabs a white granite stone and starts to make a statue of nari.

Nari laughed again. "You know nothing of the women of Gynaikes, do you? Every man should run from us... not that they'd get very far. Just because you are naive--or possibly even a tiny bit brave--enough to stand your ground, doesn't mean others will." The assassin dismounted and circled the man again. "A former soldier, you say? Hm." Naturally, assassins were solitary. But every once in a while, they found themselves in a situation where a companion might be beneficial. Nari could certainly use a little muscle now and then... Or at least someone to stand around intimidating people. This behemoth of a man would be perfect for the job. But did she want this one in particular? "Are you still capable with a blade or are you too accustomed to hunting now?"
_______________________

looks at her " yes I was part of the invasion of dragons but I still know how to use my blades we have to get to my camp to grab them" has made one third of the granite statue of you and holds it out to you to see it.

The man didn't seem to care she had called him naive. At least his answer to her question was interesting enough. "You fought those things? On the front line? Or did you just work the catapults?" Nari returned to her horse and climbed back into the saddle. "I have no interest in seeing them, nor any more time to waste." She ignored the rock Darvik lifted up to her. "Be careful, hunter. These woods are dangerous." Nari turned her horse around and started back the way she headed.
_______________________

Darvik ignored Nari's questions. It didn't matter; her interest had waned and she was taking her leave of him. As the abnormally tall man talked on about whatever it was--Nari had stopped listening by then--the assassin departed. She went back to the seldom-used route to Anthropinos. She spurred the steed into a gallop to make up for lost time

It was Nari's observation that every settlement had its own reason for existing. Brysur dealt in transport and trade; Kakos thrived on every manner of criminal activity; Ammos gave a home--be it temporary or permanent--to those who no longer had one; Gynaikes bred the finest female assassins; Kryo gave birth to great warriors. But the only reason, in Nari's opinion, for the existence of Anthropinos, was to annoy her. Its plethora of laws made her laugh and the sad excuses for criminals made her scoff. Still, the coin was good.

Taloe arrived in Anthropinos an hour later. She flirted shamelessly with one of the guards to get out of having to leave her weapons behind. She found a stable for her horse then made her way through the bustling streets. At this time of day, Anthropinos was as lively as Brysur. It made it a little easier to conduct dark business. Nari's was to take place with a member of the Kings Counsel, of all people. The meeting place was his home.
_______________________

looks up after getting done with statue and notice she is gone sighs " guess no one is patient to a solder babbling" goes back to my campsite it has a cart with a couple of big chest on it. is packing up camp site and starts to pull the cart to the city of Anthropinos.is humming a song that has been forgotten by most