Top posting users this month
Who is online?
In total there are 11 users online :: 1 Registered, 0 Hidden and 10 Guests

A trail of footprints fell in the fresh powder. Even as the dragoness continued to age, she refused to stop and rest, let the other dragons take care of her. No, she was perfectly capable of taking care of herself, even with these new monsters roaming around. Plus, it already seemed like she was more rogue than IceWing at this point. There was still a group of them, but it was no where close to what a real tribe should look like. Their numbers have been declining for a while, and if something didn't change then who knows if there will be any left in the future. They needed a real leader and soon. Her daughter, Virgo, seemed to be taking that task for now, but nothing was official yet.

Her movements stopped as she noticed a flash of brown in contrast to all of the white snow. She breathed in, her nostrils gathering the scent of sweat, flesh, and blood. Someone was wounded, and that's who she'd go after. Wolf steadied herself, concentrating on her breathing and the animals in front of her, making sure her steps were as close to silent as she could get and that her wings and tail didn't gain her any attention. It was a slow process, but the animals were content on eating the patch of unfrozen grass and lichen that they found. She continued to prowl, trying to find the injured one. The wounded one was trying to move itself closer to the middle where it would be safer from predators looking to pick it off. Smart. She continued her slow advancement, waiting for when she was spotted before darting in. The creatures were fast, but to the wounded one she was faster. Wolf jumped onto it, the impact alone probably enough to end it. But, for good measure, the dragoness wrapped her maw around it's neck, feeling the warm blood run into her mouth and down onto the ground, staining the white snow.

There, that should have given Virgo enough time to come find her. She had left her a message earlier telling the young dragoness to come and meet her, although she didn't leave a location since she wasn't entirely sure where she would have been either. Hopefully her nose was still working well enough to track her through this fresh snow.
_______________________
Areo Dynamic|Shore Line|Dynamic Oreo|Wolf|Searphineara Zorac|Atmosphere|Evaleen|Angel (Iceclaw) 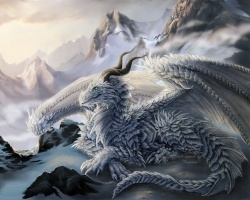 It had been about two weeks since Virgo had managed to find several remaining alive IceWings and bring them to the secret hideaway in the mountains. So far, Virgo had managed to find Snowblaze and Damian, two IceWing guardians, Atarijor, a healer, and her mother, Wolf. It was rather depressing to think about, really. Virgo remembered when their numbers had reached in the thousands. Now only about five of them remained. Virgo didn’t even know if any other IceWings were alive, or where they were if they were. But at least she had managed to find a couple, and they could begin forming a semi decent home, hidden in the mountains.

Virgo wanted to keep a close basis on everyone. She didn’t want to lose anyone to a monster, though they hadn’t quite been able to discuss what their plan was for survival yet. They were planning on having a meeting about it later today, after gathering up some food for the group. Virgo had a couple ideas in mind, but she couldn’t wait to hear the input others had given.

Wolf had told Virgo she wished to talk to her before the two had set out on hunting patrols. She wondered what about. Wolf hadn’t really mentioned a specific time, either, but Virgo supposed she had given her long enough.

Hiking through the snow, the wind blowing through her fur, Virgo trailed her mother’s scent. It was kind of hard to keep on the trail, because of the icy winds and everything, but she had been raised in this cold so she was more used to it than others. As she raced through the snow, leaping up and around rocks, she finally managed to spot her mother, with the body of a limp animal in her mouth, and the snow around her covered in blood. 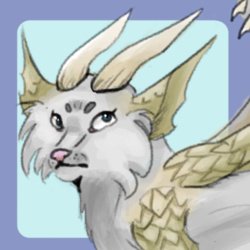 A small smile appeared on her maw when Wolf saw her daughter. "Hello, Virgo," She said warmly, releasing the animal from her mouth. Clouds were beginning to gather overhead, threatening the land with another snowfall to come. "Here, eat something, won't you?" The mother offered, scooting the creature a bit closer to her kin. Something seemed to be bothering the older dragoness, yet she wouldn't quite say what. Her tail moved behind her, agitated and with a hint of worriness.

It wouldn't be until Virgo took a bite that Wolf would finally say what was on her mind. "Virgo... I'm worried about our tribe, or, group of IceWings. Our numbers are lower then they've ever been. We're vulnerable, and unless we do something the IceWings could easily be wiped out." She sighed and readjusted herself in the snow. "I know you're not technically our leader anymore, but I doubt that anyone would argue if you took back over. I believe that if we want to expand, we either need to find the SeaWings or try to make an alliance with another tribe, show them that we're still here." Maybe then they wouldn't be stuck in a cave worrying about their future.
_______________________
Areo Dynamic|Shore Line|Dynamic Oreo|Wolf|Searphineara Zorac|Atmosphere|Evaleen|Angel (Iceclaw)

Virgo stared at the creature, her stomach growling, and was reminded she hadn’t eaten in days. As such, when her mother offered the dead animal to her, she couldn’t refuse, and gladly took a bite. Her enjoyment of the meat took a punch, though, when her obviously worried mother admitted her subconscious fears. And, to be honest, Virgo was rather worried as well. It highlighted everything that Virgo feared as well. If they were not careful, this monster invasion, this death and destruction, it could not only shatter the tribe, but cause the IceWings to go extinct as well.

When Wolf mentioned finding the SeaWings, Virgo’s ears went back. She could remember the alliances. She wasn’t sure why they had begun in the first place, but she was pretty sure it had to do with some underly tension, perhaps developing between tribes, who knows. Virgo had been quite busy at the time, but what she did remember was that, after the Seawings and Icewings had allied, nothing significant had happened, and when the monsters had invaded, rather than trying to assist each other, connections between the two tribes fell apart as they desperately rushed to save their own skin.

“I share your concerns, mom. But I’m not sure if we’ve seen or had contact with any of the SeaWings since the monsters arrived. And traveling all the way to the Crystal Seas would be far too dangerous, especially alone. And we wouldn’t even know where to look in order to find an alliance with a new tribe. It would be too risky to send someone to that tribe’s territory, because we don’t know how much damage the monsters did to the other tribes…” she sighed. It was rather depressing to think about the specifics of everything.
_______________________
Virgo♀ - IceWing Queen(Age 14)
Rayla♀ -  Demi Goddess Rogue(Age 40)

Wolf nodded, thinking through Virgo's words. Her fears were there too, fears for the other tribes and how they fared through all of the monsters that had appeared. It was risky, but, would it be worth the risk? Only if there were other tribes about, and ones that would want to help them in their weakened state.

The thought of all of the tribes being as badly affected as they were made Wolf's stomach twist. She was never a strong believer in the dragon gods, at least not after Ares, but she had to wonder what dragon-kind had done to anger them enough to provoke their rath. Monsters didn't come out of nowhere like that on their own, there had to be some sort of external connection. It was the why that was left unanswered.

Through her twisting gut she took a bite of food. They needed to stay strong, individually and as a tribe if they were to survive. They needed able bodies and children of the next generation. Without children, they would become nothing. But Wolf sensed that her days of child-bearing were gone. All of her efforts were left with one, the beautiful and strong young dragoness before her. Survival of the fittest was cruel, but it was true.

"Who all do we have left? Names, genders, capabilities if you know. Any couples that we know of?" Wolf wanted to know what exactly they had to work with, and if there wasn't going to be enough as themselves then they would have to try and find others. "And... I'm getting older. My days of bearing children are over and there are more than just me who could hunt." The female shook her head. She didn't expect Virgo to like what she had to day next. "It's dangerous, yes, but maybe I could go out and search for others. You'd build up the tribe while I'm gone, do what you can with them. As much as we'd love to sit here, we might need to find the other tribes at some point, and the sooner we do the better." She sighed. "Nothing comes without risks."
_______________________
Areo Dynamic|Shore Line|Dynamic Oreo|Wolf|Searphineara Zorac|Atmosphere|Evaleen|Angel (Iceclaw)