Type of Character: Lesser Species
Link to Character List Page: http://www.rpgdragons.org/t5069-raygnar-the-frozen-wind#63312 (Raygnar) http://www.rpgdragons.org/t4778-second-try-for-my-first-dragon-icescale-the-skywing (Snowscale)
Personal Info
Species: Thunder Bird (Tempest) and Fire Pheonix (Fireburst)
Name: Tempest and Fireburst
Alias: The Brothers of Storm and Fire
Age: About 30 years
Gender: Both Male
Sexuality: Heterosexual
Personality: Tempest is very temperamental, but once calmed is quite friendly. Fireburst is the less shifty of the two, caring and kind. He like younglings of any species, and is very bent on one day adopting one in need.
Fears: Tempest fears the water for fear of electrifying himself. Fireburst also fears it, but a little more so. Other than that the only thing they fear is separation from one another.
Strengths: Tempest has great command over lightning. His bolts have felled Lightwings before, when the two were attacked. However, such attacks drain him, reducing his energy and speed greatly. Powers as strong as that for him can be used once a month, so he chooses wisely.
Weaknesses: Water.

General Appearance
Height: Tempest is 40 feet in height, at the highest spectrum of thunderbird size. Similarly, Fireburst is at the top of phoenix growth at 20 feet, but is one half the size of his foster brother.
Feathers: Tempest is a dark, dark blue with white about his wings, and Fireburst is the colors of fire, constantly shifting just like a living flame.
Eyes: Tempest's are a blue-gray, and Fireburst's are orange.
Appearance: Tempest somewhat resembles a magpie, and Fireburst looks like a crane more or less.

Skills and Abilities
Special Abilities: They don't really have anything special except for the spells described above, in addition to their elemental powers of their respective species. Tempest's spells consist of a lightning blast that can range in power, a sort of area-burst of lightning that extends a good twenty feet radius centered on him, and his burst of speed that most thunderbirds possess. Tempest's spells do not affect Skywings or other thunderbirds. Fireburst has "nova jets" that can melt through rock with ease, but it greatly exhausts him to use this.
Combat Style: Tempest loves to weaken his foes with lightning before setting in with his talons. Fireburst does as well, but would much rather prefer to talk things out.

Background
History: Nothing is known of these two's past except that they hatched together. They lived together for most of their lives, and only recently have come out of hiding. They have already slain quite a few lesser monsters and are rumored to be heading for the Skywing Kingdom. 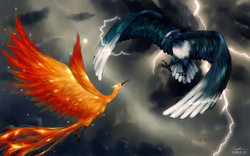 If they use spells, you need to list all that they use and what they do. Also, your link to your character list isn't clickable.

Okay, I updated their spells. I also got the addresses to my character pages. They shooould work?
If not, I'll try again at it. You miiiight just have to copy-paste it, but if it needs to be changed I'll gladly do so.

This spell that can burn enemies from the inside out. How does that work? Is it like a normal burn and the severity of it varies? Because it starts on the inside and can't be defended against, does it kill instantly? Can you target a specific area or is it random?
_______________________
Astral's favorite person. ^.^

If the spell takes a few days to actually start working, why even have it? And actually, now that I've really looked at it, the Nova Jets would count as a special ability, so he can't use spells yet anyway. Also, what is size of the area Tempest's lightning spell affects?
_______________________
Astral's favorite person. ^.^

Tis again the up of dated.