On the Road Again, Part 1 [Open to Everyone]

On the Road Again, Part 1 [Open to Everyone]

We had only found this cave a couple weeks ago, after our last one collapsed from EarthWings excavating nearby. It was rather fortunate that everyone got out unscathed. After Mama got an apology out of them, we moved deeper into the forest. Deep enough that we could no longer see the coast on the horizon; then deeper still. Once Mama found us a new cave, we had quickly settled and immediately started gathering supplies. We don't want to be caught without provisions again; don't know how soon we might be cut off from foraging, if at all.
Mama had sent me and my mother, Anima, out to find good fire wood earlier today. Sure, Uncle Ingus could light any tree on fire, but wood quality is important to how long and hot it will burn, and helps us without FireWing fathers learn to non-magically make fire; plus, we don't want the whole forest up in flames. I am still wandering around for kindling when I get a little turned around and lose sight of Anima. I'm not too worried since I've left a trail of my breath weapon to lead me back home, but the forest is still new to me and I can hear and see movement among the foliage.

After monsters had been released upon the world Navi resigned herself to a life of servitude for the safety of the IceWing tribe and whatever alliance they were now in. However upon arriving she found only ruins remain. In the desperate search of safety over her freedom she even tried searching to find survivors but found no trace. She was alone and she was scared.

As time went by she managed to stay alive mostly by hiding. It helped that there weren't too many monsters high in the skies and most she could out fly or outmaneuver. Day to day life was just her trying to survive. Today the sun was at mid point in the sky and it was clear weather. The perfect time to enjoy a relaxing flight. She thought she'd be able to spot any incoming threats but maybe she let the relaxation sink in too far. Something latched on to her back and she could feel a small amount of blood get drained from her. Her instinct reaction was to shift into a wisp of flame and escape whatever had grasped onto her. After reforming a small distance away she found her assailant to be a Skeir. She was surprised to have not noticed the monster 4x larger than herself. Even more surprised to find this normally nocturnal monster hunting in the day light. They were slow though she'd be able to easily escape it. Turning to take off she ran smack right into another one that was quick to attempt to latch on to her. Again she escaped but there was a third one now there to stop her. They were working as a group expertly keeping her from escaping. She kept thinking she could outsmart them but somehow they kept up. She was getting tired and turning into a flame wisp was getting difficult. She knew it was going to be too much for her but at this point she feared death by blood suckers. Navi let off an explosion incinerating the 3 Skeir around her. As a result though she was left so exhausted she passed out midair. The movement in the forest was Navi crashing hard into the ground. Her limbs splayed out and her wings in an unnatural position. 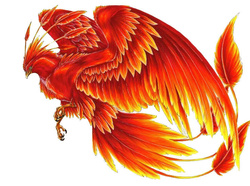 Slowly approaching where the noise came from, I'm crouched down low and slinking up to the bush behind which the source lies; hunting just like mama taught me.
I pounce!  Leaping over the bush and landing a good distance away.  Not seeing anything, I realize I over-shot and whip around to find a large, bright red bird lying, crumpled on the ground, as if they had fallen as dead-weight.  I sure hope I'm not correct in a literal sense!
Crouching off to one side, I bump my snout against creature's head, to see if they'd react.  After a couple more tries without a response I pulled a little closer, my head looming over their torso.  I could hear them breathing, so I know they were still alive.
I left to continue gathering good wood, and after a few minutes, I returned to find the strange, giant bird still asleep.  Approaching it again, I could feel it giving out a decent amount of heat, like when Uncle Ingus does as he wakes up.  With my head about a couple feet away from their's, I see their eyes open.  "Are you O.K.?" I say, with a clearly worried tone in my voice.  Granted there's no guarantee they can even understand me; I don't have Ani's ability to talk with other animals.

Navi's eyes flutter open and she struggles to remember what happened when she hears someone in dragonic her primary language ask if she was ok. Startled by the sight of a dragon Navi quickly attempt to jump up and fly off. She does get into the air but it isn't until she attempts to flap her wings that she is very clearly informed with pain that something is very wrong. She flop back to the ground in a heap of feather not getting very high to begin with. She screeches from the pain before reminding herself she doesn't want to attract any monsters. Although this dragon already knows she's in bad shape. Upon second look of the dragon she realizes he's not that big, not much bigger than her in fact. It does a little bit to quell her phobia of dragons. "No no no my wing!." Navi shouts with distraught painfully lifting her wings to examine their damage. "I'm doomed. I'm dead. If you don't kill me it's only a matter of time before the monsters do."

It was good to know we shared a language, but the bird seemed quite frightened by an injury they must have suffered only recently; most likely from a fall just now if her rather uncomfortable-looking resting position from earlier was anything to go by.  Fortunately, I know of something that could help.  "Don't worry; my mama can fix your wing.  She's really good at making people feel better."