Top posting users this month
Who is online?
In total there are 16 users online :: 0 Registered, 0 Hidden and 16 Guests

Look at my avatar if you want to see her

Name: Wisteria
Alias: She was named after a type of vine/flower.
Age:21 [Human years]
Gender: Female
Sexuality: Heterosexual
Personality: Wisteria is an intelligent, loyal dragon who tends to be stubborn when she sets her mind on something. She is a fast flyer and can fly up to 120 mph. She doesn´t like to be around people she doesn´t know, except friends. She is not good at making friends either. When she is around her friends she will be open and loud, but when she is around people she doesn´t know she will probably be very shy. She would never tell a secret not to anyone. Not even from her biggest enemy, unless its very serious. She also is a very passive dragon and doesn´t like to deal with anything aggressive to the other tribes. She has a passion for exploring and is very curious.
Interests: Sleeping on clouds, flying as fast as she can, gathering berries.
Dislikes: Drama, bullies, dragons picking up fights
Fears: She is afraid of the sea/deep, big lakes. The lakes must be 30 ft or higher for her to be scared of it.
Appearance: She seems shy at first, but when you get to know her she is loud and open.
Height: 30ft
Scales: The scales are smooth and flat.
Eyes: Yellow
Appearance: Yellow and white scales with scars from her face to her neck a little bit. She has a white underside. Two pair of horns and feathers at some parts of her body. A bladed tail.

Weaknesses: Heavy, bulky dragons. Guardians. Most dragons that are stronger then her. Griffins and most lesser creatures.
Combat Style: She isn´t that good at fighting but can fight a bit. She mostly uses her sharp, sleek tail to attack. She can do minor damage with biting.


History: She was born into this tribe and raised there without problem but she always had a passion to fly fast, which is now her hobby. The scars are from when a griffin attacked her [ Not too badly]
RP Sample: I would roleplay without much drama or fighting. 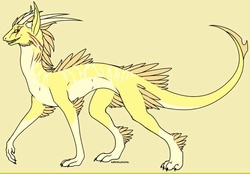 Only two minor issues. First would be clarifying her top speed is 120 mph normally and the wind ability boosts her an extra 150 since 150 is the max and using your ability to bring you to that 150 would be "dedication"

And then for the nit picks. These aren't necessary to change but advised.
"She also doesn´t like to pick up fights so she doesn´t mind the other tribes."
Fighting or aggression has nothing to do with liking the tribes. There is no correlation. One could love fighting all day with anyone and have great relations with other tribes and on the other hand one could be a complete pacifist and hate the crap out of the other tribes. Not get along at all with any of em.

Make sure you post, bump, updated, or whatever so it doesn't seem like I'm talking to myself.

Please specify how many inches or meters or whatever deep. Not just deep cuts for a dragon. Dragons range from lile 10 feet tall to 120 something feet tall so still same problem as the mouse. 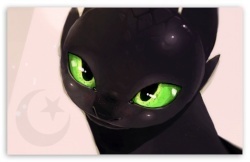