Top posting users this month
Who is online?
In total there are 14 users online :: 0 Registered, 0 Hidden and 14 Guests

Personality: Iritha is a generally very calm and good-natured dragoness, with a highly analytical mind and personality. In almost any given situation, she will attempt to pause the situation, determine its source, calculate a likely outcome, and then come up with a solution that will result in the most benefit for all parties, including herself. She is a negotiator by nature, but more than willing to apply her careful study to combat when necessary. To most she is a cold, calm, and a bit aloof, but to her friends, she opens up as a bit more of a jokester, often steering conversations towards a punchline. She adores magic, but doesn't treat it as anything more than another tool, often engaging in tedious experimentation with minute variations on spells, or lengthy debates about some arcane theory. She does not get involved with any more politics than absolutely necessary, and is more than happy to spend time with members of any and all clans as part of her relentless search for more knowledge, often seeking leave to go and travel from her clan's lands. In regards to the lesser dragons, she considers them of no interest, and is both fascinated and horrified by humans.

Fears: Imprisonment, sensory deprivation, pretty much anything that could reduce her mental faculties or remove her control over a situation.

Weaknesses: Fascinated to a fault by anything she doesn't understand, less adept at physical combat, vulnerable to poisons and toxins, not good if surprised

General appearance:
Height: 40 ft. (LightWing heritage)
Scales: Her scales over most of her body are a deep navy blue, the notable exceptions being a streak of golden scales running down her spine from the top of her head to the tip of her tail, a patch of silver scales on her underbelly and chest, and a circular pattern of silver scales around her eyes, which give her the impression of wearing glasses. Her wings, while not scaled, are silver.
Eyes: Golden
Appearance: Overall a very slender and sleek dragoness, built for speed and agility instead of brute strength, has a very long neck and tail, and slender, sharp talons. Her silver wings are slightly smaller than usual for a dragoness her size.

Wind Magic:
Iritha's primary combat magic, she is capable of manipulating the wind. This mostly involves creating wind blades or powerful gusts, generally by slashing with a claw or flapping her wings, the resulting wind then forms into an invisible blade or hammer moving fast enough to cut into the target at moderate range, generally around one hundred miles per hour, faster winds taking up more mana. She is capable of using these techniques without the somatic component (the movement) or even more complex and subtle uses of wind, most notably creating a powerful hurricane shield which spins at up to twohundred miles per hour, however this requires intense concentration to the point where she cannot move while channeling those powers. The overall mana cost is low, allowing her to use the air strikes constantly for about five to ten minutes of sustained combat, depending on how fast she sets the wind, save for the hurricane shield, which has a moderate-to-high mana cost, resulting it only being sustainable for about two minutes.

Combat Style:
Iritha, when facing an opponent on the offense, will generally lead by preparing herself somewhere to hide in a place she discovered beforehand, preferably near a hazard she can use against an enemy, going to talk with her opponent. She will use Chameleon to make herself as attractive a member of that clan as possible, and generally attempt to negotiate for what she needs. If negotiations break down, the she will retreat back to her prepared position and hide, where she will use her lightning breath and wind magic to target her opponent's eyes, before shredding their wings with her claws to send them plummeting to an early grave.
If she is attacked, she will retreat, using Chameleon to blend in, so that she can set up an ambush later. If retreat is not possible, she will use her with wind magic to wear her opponent down.
When facing multiple opponents, she will try to separate them and take them down one by one. If this fails, and she is unable to retreat, she will attempt to take a hostage and then focus entirely on her hurricane shield to negotiate for her escape. If she is unable to take a hostage, then her negotiations will be regarding her surrender.

Background:
History: Iritha was born on the island of the SkyWing clan, raised primarily by her mother during her hatchling years as her father was often gone on missions for her clan. Once she had grown, she was taken in as a Tracker, where her potential for magic was discovered when she began using lesser scrying to more effectively hunt prey. After this, her intense intellect and magical potential was set to work training as a scholar, where she excelled, but occasionally clashed with teachers due to her requirement for absolute precision. Several years into this training, her father used his connections with the LightWing clan to allow her to spend a year studying there. She excelled, developing her signature chameleon technique under the watchful eye of her Grandfather. When she returned to complete her training, she brought back a wanderlust that would never leave her, and once she graduated, she immediately set to work watching and experimenting with her magic, occasionally growing bored and requesting permission to set out into other lands for the purposes of learning more, something clan elders soon realized could lead to useful diplomatic, or if the times called for it, espionage work...

RP Sample:
As the smoke cleared from her cave, assisted by one or two gusts, Iritha muttered and coughed to herself.
"Alright then, that's how much sulfur it takes with saltpeter to explode, I wonder why..."
A few minutes later, she was already back at it, mixing together the various minerals, carefully measuring out the amounts down to the milligram, making sure not to put even a smidge too much of the nitrate in, lest she scorch her nose again.
"Right, now the sulfur... oh damn."
The dragoness cursed as she examined the broken jar, its useful, although not particularly precious contents now spreading across the floor. She sighed as she swept up the fragments with her tail into a dustpan and then into a bin labeled "Shrapnel, just in case".
"Getting another one of those will be a pain, but as for the sulfuric acids... grr..."
Iritha strode carefully through the crowded laboratory towards a large natural basin filled with water. She soon set out, using her high speed to swiftly observe a section of the SkyWing's border with the EarthWings. A few minutes of searching went by before she found what she was looking for. She flew lower to confirm her suspicions. A member of the EarthWing, resting near to the border atop a sunny hillside. A few more moments of careful examinations, combined with a brief reference to a journal confirmed that she knew this one. She headed back her lair, and selected a small figurine made of aged copper, a well calculated gift, before tucking it into her pouch, along with a jar, and stepping to the mouth of her cave and looking out upon the blue sky. It was time to make a deal. 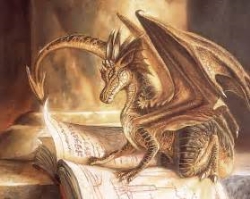 Hi there. You left out the inheritence under Tribe information. The inheritence is where you state what species you are and, if a hybrid, what percentage of each species.

Also, it looks like you didn't read the New Members Guide. New characters can only have one special ability. But don't worry, it's perfectly okay! I've put the guide in the character creation section, but a lore section will be created soon which will house the guide so it's easier to find. So anyway, of the three special abilities you have, please select only one and remove the other two. You can get them back later by earning enough DP to purchase additional abilities. If you have any questions, please ask.

Note: Lightning breath and Chameleon are common abilities of the SkyWings and LightWings respectively. They don't count as special abilities, so you can keep those.

I did read the guide, but apparently misunderstood the section on special abilities. Oh well, I've edited to comply with the rules.

Ah, sorry for the assumption. I'll try to make the bit about special abilities more clear. So since you don't have mirror image now, you need to remove that part from your wind magic. Also, because you are using magic, you need to state how much magical energy it requires for you to use the ability. Since the ability involves an element that comes naturally to SkyWings, I think you could have the magical energy consumption be low. But there should still be a limit to how many times you can use the ability in a fight. Also, how fast do the winds you create travel and how fast can you, being 75% SkyWing, travel? Remember the max flight speed for a purebred SkyWing is 120mph.

Edited again, this time setting the speeds of her wind blasts and hurricane, let me know if that's too fast. I also added how long she can use them for (Between five and ten minutes for normal, only two for the shield), and calculated her speed (.75*120+.25*70=107.5 mph).

Hm, I'd take the wind speeds down to 100mph for the attacks and 200mph for the shield. The 107mph flight speed is fine, just add that under strengths. Also, would you like your username name to be changed to your character's name?

Edited, and Sure, why not.