Latest topics
» Finally Meeting (Paradox)
by Discord Today at 10:18 am

Kayin put the last tea on the shelf. She looked over them, examining each one again before walking back and examining some more. For the past day this is all she had been doing. Something was off, and it wasn't just the fact that Kayin couldn't organize her teas. She shook her head, looking unhappily at the teas before leaving the little hut. There had to be something wrong in the mortal world. Her head stung a bit, and her realm seemed to be darker than it normally was. She frowned, walking over to one of her orbs. The dragoness closed her eyes, sitting and placing two of her paws on either side of the orb. What was causing this disruption? Her eyebrows furrowed in concentration, her relaxed features turned to frowns and dislike. Her orb didn't seem to be cooperating. She opened her eyes, glaring down at it. It was flickering from time to time, blurry and out of focus. Something was off, and she needed to find it. Maybe there was someone she could talk to. Kayin only needed a second to think before leaving her realm.

The goddess stepped lightly into the realm known as Kelarth's. He had to be here somewhere, and if not, somewhere in the mortal realm. It could have been easier to invite him over to her realm, but she still would have needed to know his location. She treaded around quietly, trying to find the spot where he normally was. "Kelarth?" She called out gently, hoping not to startle the god. "Are you here?" Kayin wouldn't normally come uninvited, not if it wasn't for a good reason. She hoped he'd realize that, and if he wasn't here, realize that she was and come chat with her. She needed to figure out if he knew what was going on.

(Sorry Kele, I didn't know much of what to do XD) 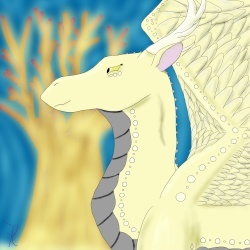 "Kayin. I thought perhaps you had remained trapped in that parallel world. But I assume you would not interlope to tell me this. So what pressing matter do you have to share?" The God of Fortune sat in the center of his mountain den. Surrounding him were one-sided portals of various sizes. He could view four at at time; every so often they rotated so he could view four more. And when he had viewed them all at least twice, they were replaced. In total he viewed about 200 a day. Currently Kelarth's focus was on the tribes and the humans; he took particular interest in Astral's adventures as one of the tiny creatures. As four portals showing Rogues moved into view, Kelarth turned to look at Kayin.
_______________________
My alts: Baldirak: Prophet of the Goddess Astral/EarthWing/Twilight King. Tulvir II: FireWing Guardian. Aerouant: Rogue. Haneul: SkyWing Guardian. Vann: SeaWing Guardian. Vilkas: EarthWing Demi-God. Atarijor XVI: IceWing Healer. Raak-tolIs: LightWIng Citizen, Servius Eirene Koinonia: Manticore/Eater of Humans, Svadilfare: Kryoan Warrior/Assassin, Ptelea: Rogue, Elara: Dragon/Human Hybrid Demigoddess 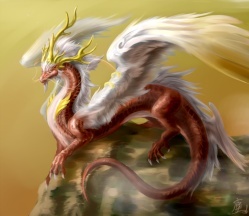 Kayin watched as he looked at his portals, them seeming to be in working condition. "Oh thank gods. My spheres don't seem to be working, I just tried one and it wouldn't let me peer into the moral world without zooming from one time to another, not to mention that my head has been hurting and my realm is darker and I've been reorganizing my teas like... like I'm on a loop!" She frantically exclaimed. Kayin didn't like the fact that she couldn't control what was going on in her own realm. Who knows what that said about her powers in the mortal world. The goddess took a breath to calm herself. "I was wondering... do you have any idea what's going on?
Or just possibly a way to help?"

Kayin hadn't been to the mortal realm in a bit of time, and she barely knew what had happened recently. The goddess had been rather secluded over the past months, still responding to messages from the other gods but never appearing anywhere. But, to the dragoness, it hadn't felt like months. Her internal clock seemed off, as did herself as a whole. Kayin also had no clue what her watcher count was like, or who all even knew her.

"You're welcome," he said with a slight chuckle. He listened as she explained her problem. "Hm... Perhaps you still suffer side-effects of being in that parallel world. We all do. Astral has become obsessed with humans. I am unable to manipulate the Fortunes. If Astral bothered to use the full extent of her power, she would find she can manipulate Good Fortune. You seem to have ended up with Bad Fortune, I'm afraid. And then there's Shinningwater, Anila, Arkhor. They never returned from that strange world. Their power here is nonexistent, floating about somewhere waiting for a new host. Nimbus... hasn't experienced any difference at all, actually. But he too has disappeared, perhaps he melted into a human existence as Astral seems intent to do. And I, I seem to have gained some of your and Astral's powers. At least in theory. I haven't actually bothered to find out. For all I know I could be able to open portals to worlds I shouldn't be able to open."

Kayin sighed. For the time being, that explanation worked to calm some of her nerves. She had feared the worst, and if it was only a side-effect from the parallel world that everyone was experiencing then she could work it out with them. Although, some of his words saddened her. She hadn't been out of her realm much after they had gotten out and didn't realize that some of the gods hadn't came back. The goddess's mind settled on the newest goddess, Anila. She hadn't known her too well, yet she had saw her almost as a sister. Now, she might be gone. The Goddess hung her head and closed her eyes.

"From whatever happened to them, may their souls rest in piece. They were all good dragons, friends even. I wish I could have spent more time with them when they were still here. Even as a time god, I had no idea any of this was going to happen. I guess there are still some things even we can not see." After she was done speaking, Kayin opened her eyes and gazed at Kelarth again. "We must find her at once, but how? Do you think we'd be able to summon her?" With all of the crazy stuff going on after they made it back, she wasn't sure if it would be able to work. Even before the parallel world Astral was hard to find. Who knows how it would be now.