Top posting users this month
Who is online?
In total there are 10 users online :: 1 Registered, 0 Hidden and 9 Guests Zenithir is a loyal dragon but holds a lot of pride to the Skywing race. This has caused him to become a little distant from those of another blood, especially the Lightwings ever since the annexation. To him, they have their own businesses and Zenithir has his own. He treasures his own peers much like he would treasure a sibling, not afraid to risk his own life to save his own kin. Even if those of another tribe have done good deeds towards him, Zenithir usually pays them no heed. It can be assumed that his goal is to see the rise of the Skywing tribe once more, in such a way that they have no need to continue this annexation or have any reliance from other tribes.

He takes his pride and loyalty so seriously that he refuses any guerrilla or sneak tactics, considering them far too cowardly and not representing what he remembers the Skywings used to be. Because of this, he avoids unfair fights, even if they are to his advantage and does not usually come to the aid of another dragon unless they are in trouble or if they are at a disadvantageous fight.

His pride aside, Zenithir is also very ambitious and focused. He became the youngest dragon to have taken upon the rank of a Guardian, and he vows to continue ascending the rank to be a powerful figure among his peers. But to what end, no one really knows. He has no use for materialistic rewards like fortune, and did not seem to be the one wanting to sit upon the throne and involve himself in politics. Perhaps it is to have his name known and etched into the history of Pyrrhia.

Fears: Loss of his wings, as it means he will never return to his homeland
Strengths:

Zenithir is a bulky dragon with a good balance of speed and strength across almost all areas. He can go claw to claw with heavier build dragons and can topple most infrastructure with a mere dash and charge. He also has very good claw, tail and wing strength, all of which are capable of landing crushing blows when delivered at the appropriate speed (all of which he can only do when in the air). This allows him to strike even against the thickest hide or armour, with the impact being enough to crush his opponent's internals. Being a Skywing means he outperforms most of the other dragons of the other tribes with similar builds in terms of speed, topping at 120mph, which he can reach in 3 seconds in the air.

He does not perform well during combat on the ground, as most of his techniques are built on aerial combat. Even with his bulk, he only uses it just so he can recover his wings and take flight again. All his techniques rely on him quickly revving up by, say, quickly flying back a bit before charging forward with his claw out. His running speed is only 60mph top.

Zenithir's defence is mostly in his hide and plates. It is thick enough, allowing him to shrug off most light physical and magic attacks, but a swarm of them can throw him off a bit. He does not possess the common dragon's weakness of a soft underbelly, as he has large belly plates to cover it, which is as protective as steel armour. However, he is not immune, as heavy attacks against anywhere that's not his belly can hurt him severely, and heavy impact against any part of his body can bypass his hide as well.

Zenithir has average mentality when it comes to combat, knowing the fundamentals and what not to deliver devastating and strategic blows. Aside from that, he doesn't really rely on his brain to tell him what to do. Beyond combat however, he possessed slightly above average intelligence. He knows his way around Pyrria as well as the politics that govern it, but he rarely associates himself with them.

This takes away all of his strengths. As he is specialised in aerial combat, his techniques on ground is subpar.

Zenithir has plates all over his underbelly, which covers the general dragon's weakness. At first, it seems he has no weakspots, but his hide does not cushion any hard impact against it that can ripple throughout his body, causing damage. Strong piercing magic can also get through his hide and plates, so it is not a guaranteed protection.

Another weakness for his protection is that it is very cumbersome. His agility when performing swift strikes, like clawing or tail whipping is greatly hindered, meaning enemies can easily retaliate after his first attack. This is why Zenithir needs to use the trails of his orbs, as they will help push his limbs faster.

General Appearance
Height: 30ft
Scales: Scales are a decent mix of green and yellow, which large yellow plates over his belly.
Eyes: Yellow Iris and pupils.
Appearance: Zenithir is not a typical Skywing, thanks to his green scales and unorthodox features like his wings or furred tail. His appearance is as shown in the picture above.

Zenith concentrates and creates an orb of condensed swirling wind in his maw (radius of 5ft). With this, he can either hurl it from his maw or place one each on his claws before charging in any direction and hurling it with them. He can place them on all four of his claws, and can also use his tail or wings. With how his wings are designed, he can hold up to six in them. Thus, in total, he can hold at maximum fourteen orbs. However, he almost never does this because not only does it expend so much energy and time, but he will have to waste even more time fitting and balancing them. Another problem is that he won't be able to move without either stepping (and hurting himself) or accidentally hurling away the orbs with his wings as he tries to close the distance. The wind energy within the orbs are so highly pressured that any contact can cause severe burns on any skin or scales.

The orbs explode upon direct impact or when it decelerates to stationary, resulting in a huge gale (AoE 50ft radius) enough to blow back an Earthwing several distances away (up to 200ft for a 100ft dragon, and down to 2000ft for dragons 10ft high and below). Beyond becoming a huge wind bomb, the orbs won't do much else.

These orbs can be hurled at up to 100ft/second, maximum distance of 300ft. When thrown, they will leave a temporary wind trail behind it, the gust going in the direction of the orb. Therefore, any dragon or projectiles flying with the flow will go a bit more faster (~25% of their speed) but slower when going against it (~50%). These trails last for 1 post.

Zenithir, being an aerial combatant, will rely solely on fighting while in the air. But because his orbs won't do any direct damage beyond burns and scarring at direct hits, he becomes reliant on the environment and sending his enemies at high speeds into solid surfaces like cliff walls or trees. After hurling one orb, the trail it leaves allow Zenithir to make another follow up attack if needed, or provide some 'defence' for him in a sense that he will keep his enemies away from him. 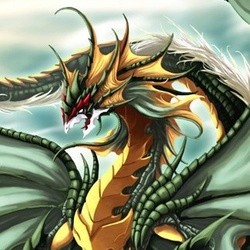 He needs another weakness. Aside from being grounded, does he have any other physical weaknesses or maybe a mental one?

Also, he can place an orb on each of his claws. Is that all four paws or just the front? And with his wings, given how they are designed, is it 8 or just 2, one for each wing? Basically, how many orbs can he hurl at a time when he uses his wings or claws?

-Added that he can hold up to 14 orbs, but this is very impractical due to energy, time wasted, and severely limiting his movements
-Added 2 more weaknesses in regards to his hide and belly plates.

Ah, one more thing. How big are the orbs?