The silence fell like cotton. It was an empty place, standing impossibly still like the beginning of something vast and endless. It was where the white wasteland of the plains rolled out from the forest, an endless expanse of sparse white hills and lonely, gnarled trees who stood like sentinels, or blue-brown crows, to rise up solemnly and watch, closely, each creature that ventured there. A place sparse and riddled with hidden dangers and pitfalls.

Arius, still as a statue at the edge of the forest, hesitated listening. It had been hard going on four claws as she was not eager to fly, aware of the dangers lurking in the endless white openness. Other creatures, older and more powerful then she, were hungry and ruthless, and she was no immortal. It was eerie to be here, a sore green-thumb like her, and she skulked along the whiteness, dreading the crunch of snow beneath her. A dangerous place and one of uncertainty and risk...much like her task. Her stomach churned at this thought; it was unpleasant business, but necessary. Not to take it would have been a mistake.

She shivered and grit her teeth. The green gem of her body twined along from tree to tree. 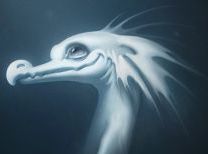 Aela sat silently, her white fur coat blending into the frozen expanse. The weather was growing colder and she needed to store more meat if she wanted to survive the lightless months. Her hood drawn over her red curls a flap of leather covering her nose down. She breathed softly, knowing that keen ears were about. On her shoulders was Pirika, snow white as always, she was silent peering ahead to spot any potential prey. Aela had been tracking a herd of moose, massive animals. Even a smaller one would last her the whole winter, its pelt would be money alone. She had lost track of them in the general vicinity their paths splitting up in multiple directions. Aela judged they'd come back and she would wait for them here.

Soon, Pirika's ears perked, lowering her head to signal the direction. Aela was suprised that her companion was pointing not forward but behind her. Aela turned silently, grabbing 3 arrows in her right hand and knotting one she narrowed her eyes to see ahead. There was no snow storm but enough of it fell to restrict her visions past a few dozen meters. Pirika, hissed as quietly as she could, raising her spine in frustration. Aela held her breath once, trying to hear what was coming towards the pair.

Her eyes saw none, no sound carried to her keen senses. Yet, from experience Pirika was only like this for one of two reasons. The first, was something Pirika didn't like perhaps someone Aela had ill feeling towards, or maybe wolves that posed a potential danger. Aela let out air, The second reason were dragons. Aela removed her mask and hood, her shivering having nothing to do with the cold. Little berries of snow sprouted on her red hairs. Her breathing was hard to control, her chest rising and falling in soft shivers. The fear of fighting a wolf or even a bear, the thrill was part of the fun. A dragon, a dragon was a different story.

She had seen the outline, it was almost slithering on its belly, making itself a smaller target. In Aela's eyes it reminded her of a snake on the hunt for prey. Her nostrils flared as she forcefully drew breath. At the distance she would be able to peg all 4 arrows instantly but with her state she would probably miss... Besides the scales of a dragon were like a wall of iron coins. Aela rose drawing on her bow but not yet at its maximum. She'd audibly draw breath in, "AHHH!!!" She screamed loudly. It echoed down, only silence following the lone cry. It would alert the dragon of her presence.

Aela breathed in and out, trying to control her beating heart. Pirika, more afraid than her owner crawled inwards into the fur coat. Aela had her bow still have drawn, ready to hail down futile as it may be. She wondered if the Moose had run towards the cold lands away from the forest.

A shrill cry tore through the muted winter air and traced shock waves of attention through Arius. The Earth dragon startled and turned, instantly swiveling her long thin neck towards the blank and utterly white expanse to to her left, where she judged the source of the sound. Taut and ready to fly, she saw nothing through the emptiness.

Something was out there, and her green stone body was utterly exposed even in the dusty snow. Like a sore green thumb she crouched in stark contrast with her surroundings, taking little comfort in knowing the low visibility of the weather offered her some protection. Her eyes darted over the endless landscape, cold and piercing, and she scanned the sloping incline more intensely, still seeing nothing but preparing for anything. As seconds passed with no movement, she took stock of the situation.

Suddenly she realized that source of the sound was human, and it threw her. Dragons she could deal with, but humans...Fear and hatred boiled in her chest like tar, visions of pits and chains flooding her mind like demons from hell. She struggled within herself, grasping against her internal balance and outward attention. Anger makes you careless, She remembered Cerius' words, and carelessness will make you Dead. Ari: Fear is the mind killer.* Don't let your feelings get the best of you...

It helped to think of Cerius, and she again thought about what she'd heard. Humans....she wanted nothing, absolutely nothing, to do with humans. Ever. She was tired of wanting them dead, she was tired of being afraid and wanting revenge; it was done, and as far as she was concerned, it was. She wanted it to be done. She breathed, and put her thoughts back onto her errand, on her next step.

This was no-man's land, not Human territory; there had been one voice, not a company's worth. She was on equal footing with any creature she encountered here, and though rather medium-sized for a dragon, and non-violent by nature, she was still able to defend herself adequately.

She weighed her options. It was best to face your problems head-on.

Decided, Arius took action and roared, loud enough to be heard through the surrounding hills. With a leap she was in the air, rushing, snow-driven, up the hill to where she judged the source of the cry. When she landed with a spray of snow, she still saw nothing, but knew she was close.

The defiance echoed through Aela's heart. Shaking snow from tree, bird from their perches, rabbits into hiding and even the wild at heart into a stunned shock. Tears welled up, a trickle circling her beautiful blue eyes. Aela gritted her teeth, her brows furrowed. She was angry at herself a tide of fear clashing against her own frustration for feeling that way. The dragon leapt into the air, Aela could see it's figure breaking the falling snow above. It blotted out the sun for a moment but with two flaps was upon the very hill on which she stood.

Aela pulled her bow arm, letting the full weight of the draw takes its tension. With baited breathes she tried to clam herself down. The tip of her arrow pointed at the softer underbelly of the dragon. She needed to remain clam, or at least try to. She had little chances, targeting the softer sides while they were exposed would make the most sense. Or else it would lead to precision shooting to the dragon's eyes....while the dragon moved. Yet Aela's mind wandered into white abyss, fields of what seemed to be endless snow.

With a crash and an explosion of snow the Dragon landed no more than 5 feet away from her. Her body flushed cold, her skin on edge. She felt more aware of her body then ever before. From each of her soft hairs to the very veins that kept her alive. Yet, her body didn't feel like hers at all. Her chest felt hot, restricted like someone was pressing down on her. She could feel the beginnings of choking. A single tear left her eyes her brows quivering. It would be Pirika who broke the spell. From under Aela's clothes popped out the little white dragon. Its small line of needle teeth hissing loudly.

Pirika too was scared out of her mind but seeing her owner in such a state, primal instinct to survive had kicked in. From the safety of Aela's chest, Pirika hissed as loudly as she could, a lone paw hand batting the air, telling the ferocious dragon to stay away. Aela blinked, her body returning, she blinked wildly, gasping as she did. She defensively tilted her body sidewards, trying to protect Pirika. "AHH!!!" Aela screamed at the dragon in defiance, hatred visible in her blue eyes. She had never seen a dragon up so close, only seeing them afar and knowing them from stories alone.

((Sorry this took so long to post! HUGE project popped up this week and have been sort of out of commission ;;/ . /))

The human seemed to appear from nowhere, bow taut and aimed at Arius' chest. In that split-second of movement muscles rippled at the base of Arius's own slick green neck and her eyes narrowed; neither flinching or withdrawing. Their eyes met, and Arius stared into her opponents; wild eyes, icy blue.

Then Arius saw a writhing, rippling happening in the human's second skin, how it twisted itself within to subdue a hissing flash of a white muzzle, the flick of a wing. Another creature, somehow familiar.... but in that instant Arius' attention was drawn to the bow, the point of which had drifted away from Arius' chest. Had she intended to strike and kill this was her opening. She considered it.

But the dragon remained standing, observing the human. The smaller creature continued to struggle with it. And then the human turned and roared.

Something about the roar affected Arius. She had not expected it, any more then she had expected the human to be there. It gave all her insides pause. And what was that wriggling creature?

She wanted more time to figure out.