At the Break of Twilight (Open to All)

At the Break of Twilight (Open to All)

It was just before twilight, and Midnight, usually to keep its inner beast contained, often came to the same place around this time to isolate itself from the Nightwings just above the horizon.  It was foggy around an open field, and there was no one in sight it seemed, so it sat, waiting for the inevitable departure from itself to come which was imminent.  And right on time, the creature began to emerge from the lurking abyss of its subconscious fears and nightmares.  Midnight felt like it was falling asleep, and its body began to transmogrify into a horrible, black creature of a dragon, as its exoskeleton emerged and its body became much different in appearance, having now four wings and three tails tipped with spades.

The Twilight Devil, infamously known by humans, was much less irritable than usual and more calm this reemergence of twilight.  Blind, it could only see in black and white, delaying echolocations.  It was slightly confused, perhaps a bit bored with its scenery, though it couldn't do much about it.  It just paced around, meandering, seeing clearly through the fog.
_______________________
http://www.rpgdragons.org/t4708-midnight-wip#60017
ﬥ

A charming darkness swallowed the NightWing territory, as usual. It's swampy lands and subtle odors (but you somehow grow use to it) were as present as ever as one would trek through these dry yet muddy lands. The tribe was scattered at this time of day, any doing their nightly routines, others were sleeping, and some were wandering the lands. And that 'some' included Despair, a foreigner to Pyyria but some a pure NightWing. She found herself forging for a secluded area to lounge, but unfortunately, there were many open areas that she came about that were crowded and busy.

The dragonness would soon grow too tired to move onward, and settled for a gloomy and silent area just in sight. She would curl up on a flat rock and peer down into the foggy abyss. But then came something strange. Something horrific. It had several wings and a few tails, more than one would expect, but the fog had hidden the rest of the creature's figure. Without fear nor hesitation, Despair would call out to it in a sweet and charming voice like a forest bee's honey, words rolling right off of the tongue like a ball, and her red eyes fixated on the figure below her perch, "Lovely night, is it not?" She spoke with quite the volume, loud enough for herself to be heard.
_______________________ 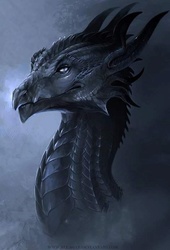 The Twilight Devil was incompetent, to the point where it did not even speak.  It was intelligent enough to hunt, but that was about it.  It lurked, curiously pacing about, when suddenly it heard a female voice from behind it.  It quickly jolted forward, then whipped its body to face the opposite direction at the dragon.  It snarled and growled, and its echolocation was low enough frequency that it was audible, but was still a very loud, high pitched screech.  It was terrified, and stood in a self-protective stance.  Alert and poised, the Devil was adamantly ready to be safe once more.

Despair would chuckle at the creature, followed by her seductive, illusive smile that would crack her face. It was obviously not as intelligent as dragons would be, or so it seemed. It seemed to communicate through actions and not words, and its body (of what little of it she had seen through the dense fog) was hideous. She was fascinated by the creature, it was nearly indescribable when it came to her thoughts and feelings about it. But alas, she had come to a conclusion of what to say to the mysterious creature. “Now, now,” she said, her tail swishing back and forth in curiosity, “I mean only well, mysterious one. Neither of us wants to get hurt, right? Right. So come up here, and let me see you with my eyes.” Despair invited the creature with her coy movements and welcoming demeanor. She wasn’t quite sure if it understood her or no, but she ached to lay her eyes upon its body. It was far too mysterious to not desire such a sight.

The Twilight Devil responded with a high pitched, screeching, echoing roar. It froze in silence afterwards for a few moments, sniffed the ground, and instinctively knew the dragoness afore itself presumed no harm, like Midnight's intelligence was lurking just below. It stretched its jaws wide to make a long, silent yawn, then stretched its wings which spanned quite wide. For the creature, it was the first time it heard speech, but the subtle recognition of speech made him very curious, he wanted to know more about it. The creature dashed, prodding curiously towards the Dragoness, then leaped from the ground and made its way towards the dragoness.

The creature latched onto the cliffside below her, and curiously inched its nose above sniffing the area, it crawled up slowly, breathing heavily as it placed one arm in front of itself and then the other. It finally was exposed in full, it had a skeletal-like, skinny body. It was black with an elongated head, and its three tails were tipped with spades. It was jerky in its movements, because it was famished and had not slept. It extended its neck briefly as it roared again, aiming its head at the dragoness, but the roar seemed more subtle, and it was weak and sickly as it did it, stumbling in its place as it withdrew and looked back at the ground.
_______________________
http://www.rpgdragons.org/t4708-midnight-wip#60017
ﬥ

Despair would gaze patiently into the foggy abyss as she awaited the arrival of the mysterious creature that would lurk in the darkness. It was almost like some sort of horror scene in a movie, silence, a dense fog, an unknown creature lurking in the darkness but the uncertainty of what it is still remains. It almost sent chills down her spine. Its high pitched screech, its jerked movements, it was all very frightening, but not frightening enough to shake Despair. No, a mischievous smile would crack her scaly face, and her talons would tap the dry stone.

The beast would make its way to her, from her perch. It had finally revealed its scrawny self. Skinny enough to see the outline of its ribs through its body, and with an anatomy so odd that she could barely identify it as a dragon, "My..." she spoke softly, with a sneer, "how large you are! Doesn't look like any dragon I've seen. How fascinating. What is your name? Do you have a name?" She was intensely curious as to what this dragon was, or rather, who it was. If anything, she wanted to control it. Have it aid her in her desires.
_______________________

"Name," replied the Twilight Devil, in a strangely retorting way, with saliva dripping down its mouth as it stood wickedly stance, regaining its balance from being tired from traveling even just a short distance. Its voice was wicked and low pitched, sounding bizarre, just blindly copying the sounds it heard. It was so curious about speech, but this was perhaps the only time it was gentle in its curiousness, yet it could not understand what it heard, though the intelligence was filtering above still. It will probably be more aggressive next twilight, frustrated by its own unintelligence.

It chomped its jaws at her direction, angered slightly, because it thought it would be easy to understand. It studied the dragoness intently, scanning her body in black and white echolocation. It was perhaps perplexed, and felt emotions like it never had before, no one had ever so confidently greeted him, which made it feel self aware. Its wings were shaking nervously because it didn't know how to interact... It was, perhaps, a bit embarrassed. But, Midnight, when he will reemerge, would never want to be controlled.
_______________________
http://www.rpgdragons.org/t4708-midnight-wip#60017
ﬥ

Despair would snicker playfully as the dragon approached her, she was still very interested in this unique dragon. Its... strange body and way of communicating. It replied to her, using actual words, but it wasn't a very fulfilling response. He seemed to only repeat one of the words she said and fell silent. It had no tone or real emotion in that word, it was more robotic or systematic than that. Despair would also fall silent for a short period of time, contemplating this situation before finally coming up with a conclusion. "You don't know how to speak, hm? Interesting. It is most heartbreaking to see such an uneducated brute act so much like an animal. Tell you what, in exchange for teaching you to talk, read, and write... you can owe me a favor? This will be a life changing act of kindness... and I will also teach you the concept of returning the favor. You probably don't understand me, do you?" She spoke as the dragon reacted to her trying to pet him. She held her paw back with a raised, scaly brow, and a warm smile.

She began to draw what she was saying on the stone below, hoping to communicate her intention to him. He probably wouldn't understand anyway, but for the uneducated and ignorant, it was the best way.
_______________________

"Learn," said the Twilight Devil, again in it's same, mechanical monotone, still intelligence  was filtering above.  But this word sparked his attention greatly.  But anyhow, by now it was just beginning to get darker, and the beast was starting to get hungry.  It looked at the set sun horizon, which looked about a dark cyan, and stared at the moon, twitching eagerly to leave.  It was growing weary with an empty stomach, and suddenly began to creep its head back at the dragoness.  It drifted its eyeless gaze of echolocation with fatigue, but it was adamant about leaving.  It was acting out of a natural instinct as it slowly began walking towards nearby woods, all this intellectual stimulation made the beast irritated.  He shook his head, irritated it could recognize important words but had no idea what they meant.

It flapped its wings with a sudden, medium force, propelling its pace on the ground faster into the woods.