Where are we going again? - Tsidia heard a voice in her head. It was hard for her to admit that she didn't know really. Somewhere colder. And far away from Silver. You still have that map we made back then? I lost it few days ago. You're lost again aren't you? We are. WE are. Landscape, she was flying over was rather dark. As time went on, she found herself in front of a forest. Wait, I know this place. It's "The Rotten Forest". I heard that... The ground beneath them suddenly started shaking. On the horizon Tsidia noticed a giant object heading East. What the hell is that? Something huge. Meteorite I suppose. Are they dangerous or something? Why don't you see for yourself? I never got a chance to investigate any. Tsidia felt familiar thrill of adventure. But I'm not going to save you this time. You're on your own. On her way towards the now grounded target she noticed mass destruction all around her. What happened here?! Whatever that is, it must have caused a massive shockwave when it hit. They were now closer, approaching a black orb, lying in a crater. Tsidias eyes turned dark blue, when she focused on connections all around her. Always better to know, if you might be dealing with aliens or worse, humans. Centring her attention on the crater she felt sudden flow of energy coming towards her. She felt confused, immediately backing off, but it was too late. Unbearable power turned to her, interested in her high-conscious mind, throwing her unconscious on the ground. 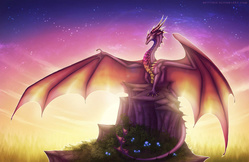