A time to heal. (Private, Ardent)

A time to heal. (Private, Ardent)

The verdant taiga sprawled for miles beneath the wings of a dragon, its foliage largely uncaring to the inherent death of the soon over season of winter. The sea of pines stirred slightly at the wind created by the flight of a large creature, a blur of blue passing overhead. It was marvelously cold for most, but none who would reside here would ever complain. Signs of spring were showing, and the trees below the passing shadow were being treated to a teasing sample of rain. The sky above was a fitting depressing grey.

It had been weeks since Tezz had fled the IceWings, and in the interim had gotten himself hopelessly lost outside their territory. The first few days were the worst. He had spent them entirely grief-stricken, wallowing in a cave. This made hunting for survival difficult due to fatigue the following days. The environment was a familiar enough one that he could fend for himself. The next few days had passed in a uniform numbness, any thoughts that might have occurred to him were shut down to save him the pain. Those days passed all the same, the necessary steps for survival done in an automatic manner. Now, he was finally beginning to accept what was happening.

He was going to get dehydrated if he kept going at this rate.

Tezz made a descent more akin to a collapse than a landing on a hilltop clearing, scattering the skittish wildlife that had gathered by the newly thawed pond there. His eyes were doing their best to imitate the pool. There was nothing more that he had left to do today, so he collapsed by the water, his reflection coming in to view. He was a mess, without a doubt. Dirt and grime were caked on and around his intensely blue scales, and a weary forlorn expression worn made him appear many ages older than he was. It was enough for him to look away, seemingly content to simply sob the day away right there. The sun shone down directly overhead with a warming heat, as though in a condescending gesture of passion. A feeling of being watched made itself known to Tezz, knocking gently on the door of his soul, only to find the door locked. It was time for tears now, and nothing else.
_______________________
Tezz : http://www.rpgdragons.org/t4295-tezz-the-fretful
Almia : http://www.rpgdragons.org/t4336-almia-the-fog-bank 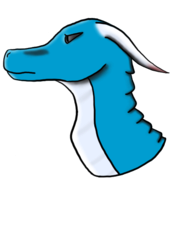 Stretching her wings as the sun managed to once again break through the oppressive blanket the smothered the sky, Ardent let out a small sigh. While it was true, the rain was pleasant to her, the cold and wet it brought along with it was not. Sneezing loudly, she rubbed a paw along her snout, shivering slightly. While she had left Icewing territory proper days ago, the outskirts were still more than cold enough for her liking. Letting out a long yawn, she considering returning to the cave she had spent the last few nights in, the depths warm enough for her liking, and sheltered from wind. But of course, her stomach chose that moment to rumble in disagreement. Giving her wings an experimentory flap, she stretched her neck and clumsily made her way into the air, using a nearby tree to propel herself upwards, claws sinking into the trunk before pulling her quickly towards the sky, launching herself.


Coasting along, the rain softly pattering against her scales and wings, Ardent cast her gaze downwards, to watch a slowly thawing river move on it’s sluggish way. So caught up in examination, she almost missed the large shadow passing over. Shivering as the temperature seemed to drop, she turned her gaze skywards, only to let out a small sound of terror, the shadow belonging to a large blue dragon. Diving towards the ground, she landed awkwardly, hunkering down to watch the dragon continue forwards into the distance, descending towards a hill, a number of trees blocking its landing from her. A number of different thoughts and emotions swirled about, the two main being her agonising loneliness, but at the same time the fear brought about by the newcomer. Finally, her mind was made up by the fact that the unknown dragon was blue, the same as Artemise.


Breathing slightly heavier than she had been, the trees covering the hill slightly annoying to move through, she finally reached the reached the hilltop. A clearing was just visible through the gaps, and in some of those, glimpses of the large blue dragon. Lowering herself towards the ground, she watched them for a time, intrigued, before a small sound made itself known to her. Sobbing. Ears perking up, her head lifting, she let out a small, concerned sound and, much to her better judgement, called out, "He-hello? Are… Are you alright?” As she walked forwards, entering the outer reaches of the clearing, her head down in a submissive and non-threatening gesture, hoping not to startle, or at least, not to make the other dragon scared enough to run.
_______________________
"There are few things more beautiful, more inspiring, and more terrifying than the last breath of a star."

There is a delicate ecosystem in a common pond. Many forms of life gather there, and coexist in various ways. When a disturbance occurs, such as a stone being cast in to the water, you often do not see the effects of it save for the ripples on the surface. There are however many effects within the lake itself, below the surface. A strong parallel can be drawn to a minds reaction. Often the true effects of words and actions happen below the surface, and can only be observed through careful observation.

However, Tezz reacted to the metaphorical stone of Ardent's  introduction as though all the wildlife in the pond had congregated at a singular point, and the stone been tossed right in to the middle. With an excess of flailing, confusion, panic, and splashing.

Taking a cautionary step back from the large, she could assume, Icewing, Ardent dropped a foot or two lower to the ground, her body tensing up in preparation to propel herself into a dash away. Keeping her head bent low, but casting glances every few seconds towards the much larger dragon, she watched, with a ghost of a smile, as he flailed about, only to end up in the water. Accepting his questions, and seeing the panic in his eyes, she tried again to make herself seem smaller, a pointless exercise when the dragon in front of her was almost twice her size to begin with. “My name is Ardent. I’m… No-one, really. I just, noticed you seemed to be in pain, and wanted to see if I could help.”  She explained, keeping to the truth in hopes that the Icewing would be able to see that her words and intent were pure.


Unsure of what else she could do to show her peaceful intent, short of lying down or resting (both actions which she was unwilling to enact until she knew that the dragon that she was currently speaking to reciprocated those intentions), she simply took a step back. “I… Don’t wish to hurt you. Or you to hurt me. I’ve been alone and just… Wanted to speak to another…” Pausing for several seconds, she tried desperately to think of a topic which she could change to to garner her companies trust or interaction, but none came to mind. Opting to simply fall silent, she awaited the response of the dragon.
_______________________
"There are few things more beautiful, more inspiring, and more terrifying than the last breath of a star."