Personal Info
Name: Karma Akabane
Alias: Karma
Age: 125; appears 23
Gender: Male
Sexuality: Straight
Personality: Karma, at first glance, comes across as lazy and good-for-nothing. However, this is not the case; when he wants to, he can be hardworking, but usually tries to cover it up with lies, pretending that he'd aced whatever test that had come his way without working hard at all. Karma is cold and arrogant, like most of his kin are, and can be brutal if he wishes to. There is a sadistic streak to him and he loves to humiliate his opponents, usually using torture, and he has a liking for violence. This does not mean that he is unapproachable; he is rather patient, surprisingly, and isn't hasty in his decisions. He is strict to those under his command, but no more than necessary, and he is honest and also fair in dealing out punishment. Karma is capable of getting along with others, especially if they share the same nature as him, but he's often secretive, unwilling to talk much about himself. Karma has a distinct leadership quality, and is able to utilise and lead those who are under his command.

~History of the NightWings

~Those who have to poke their noses into others' businesses

~Losing. He'll look like he won't mind, but he'll get back at you somehow

~Getting killed by fire

~Getting drowned by water

General Appearance
Height: 73 feet
Length: 150 feet
Wingspan: 170 feet
Scales: Feathers at some places, extremely thin ovular shapes at others
Eyes: Bright golden
Appearance: Karma has a pair of horns with short, black feathers on them; the horns curve upwards. On his neck and all the way to the tip of his tail, there are green spikes which jut out of his back in a violent array of spikes. There are three rows of those spikes; one in the middle, and two flanking the middle ones. The middle spikes start from his head, while the other two start from right behind his horns. The rows have very little space between them, and they merge together to become one row at the area behind his wings. There are some spikes growing right behind his wings. They are somewhat...splayed. At the tip of his tail, the spikes become a rather spiky fan. He has shoulders which have feathers on them, and the membrane between his wings is the same green as his spikes.

His forelegs have some spikes at the back of them, and his hind legs have feathers on his knees. He has a green underbelly, which is a shade darker than the colour of his spikes. His wings have extremely sharp ends, which resemble curved claws, and can be used to harm.

~As mentioned in his personality section, Karma has leadership qualities, and can also keep a cool head in panicky situations.

~Karma is cunning and manipulative, which is of great use to him in his daily life when he's trying to worm his way out of trouble or to get information from others.

~He does have some skills of combat. Having liked shedding blood in the first place, he made sure to train himself until he was proficient in it. In a battle, he moves swiftly and nimbly, and strikes with deadly accuracy. He fights like a snake: violent, unpredictable, eerily silent, lethal.

~Tracking. He has an uncanny knack for guessing the locations of others correctly, and he has a remarkable sense of smell. He, like a wolf, can smell and determine scents, especially those belonging to dragons.

~Can blend into the shadows. This is due to his black scales/feathers.

~He can breathe out a gas which, when inhaled, causes the victim to feel some discomfort in their limbs; in other words, it's like having your legs cramping with the pins-and-needles feeling. This is temporary and can be used once per post, and the effect lasts for only ten minutes.

~Shadow Companions. He can create multiple copies of himself, but his "shadow companions" are significantly shorter than him, each standing at fifty feet tall. They are pitch black in colour, and they move like how smoke drifts through the air. They have blood-red irises, with slitted pupils similar to Karma's. Karma's Shadow Companions cannot speak. They obey every single one of Karma's orders (he can give orders using telepathy; he can only use his telepathy with his Shadow Companions, and no one else), but they are like robots. They follow, but have no will of their own, nor do they have their own way of thinking. They fall into traps easily, and can be killed just as easily. To kill them, decapitate them, or expose them to direct sunlight. He can only conjure up his Shadow Companions once every two posts, and the maximum amount of companions he can create at one time is three.

They can hurt others, but they deal lesser damage than Karma. In fact, the blows they deal are twice as weak as Karma's, so he usually uses them to confuse and disorient.

~He flies slower than he runs, and he's much more clumsy in the air than he is on the ground.

Feint, dodge, lunge, run here and there, feint again, lunge (again a feint), play dirty (maybe scooping up soil with his claws and hurling it at his opponent's eyes, or trip them), attack.

Background
History: Maybe another day...
RP Sample: Karma felt the cool breeze of the night brush against his scales, and he smiled. He would have been happy if not for the uneasy feeling lingering at the back of his brain. Flying was nice, but he wasn't so good at it. The uneasy feeling soon turned into warning bells as a sudden gust of wind threw Karma out of balance, and he was spiraling down before he even knew what was happening. A cry of rage, directed at the stupid wind when his brain finally registered what'd happened in the past few seconds, ripped out of him, and he flared his wings, desperately hoping to rise into the air again. He was carried upwards by a draft of wind, and soon he was in the air again. At least he didn't go splat on the ground.

But he wasn't in the mood anymore. Tilting his body downwards, he descended slowly, or tried to; instead of slowly descending, he plummeted to the ground like a stone. A shriek, despite the fact that he'd swore NOT to make that sound ever again, escaped him. His tail managed to curl around a tree branch, but that did nothing to halt his fall; the branch snapped, the sound a horrible rip in the silence of the night, and Karma winced. And then he winced again as his back slammed against the ground.

Lying there, he decided that running was better. He got up, face blank again, revealing nothing of the humiliation he had suffered earlier. Then he walked back to his home, a smirk once again stretched across his lips. 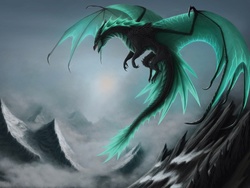 "It doesn't mean all of his attacks are auto-hit". What attacks does he have that are auto-hit?

I also changed his tribe and rank.

Specified inheritance, and yes, his shadow copies can harm others. More explained in the app.

Welcome to the Ebonwings!
I will be posting information shortly regarding the Tribes hierarchy, so keep an eye out, hehe.
_______________________
Tenebris's Bio
A look at one of Tenebris's Publications as a Scholar

~Personality, which has been rephrased
~Changed some of his interests
~Added in his new rank [with approval from Tenebris]
~Deleted two strengths and added in one
~Removed two weaknesses
~Changed the duration of the effects of his special abilities to periods of time [e.g 10 minutes] instead of number of posts
_______________________