Today, Nightflare was heading out for supplies, coming dangerously close to the NightWing border. But how could the devious dragoness help it? That was where these flowers grew. And she needed them for an important potion. Sulking to the NightWing territory, she would begin to pick the flowers. Virtually unnoticed due to her stealth, and her magic helping her to tell if anyone was nearby. 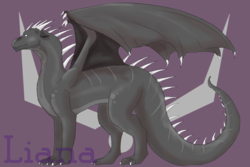 So the search continued.

Ever since her mother had left her father, and thus leaving her alone with her dad and siblings, Lalani had always felt a bit empty on the inside. Her heart was hollow, having wandered the region known as the NightWing Empire. Her father and other siblings, as far as she could remember, had all left to go and live in the ocean. In the deep blue sea, the thing teeming with life and various plants and creatures. The thing which could kill an unprepared dragon in a few seconds.

One of the few things Lalani was horrified of.

A small twig attacked her feet, and she gave a small yelp of fear before falling face-first into a pile of dirt and grass. The tall, spindly trees rose over her head, and the young dragon whimpered in fear as their shadows threw wicked looks onto the ground. Staggering to her feet, Lalani's tail was almost in-between her hind legs in a show of fear.

The young dragon went further into the NightWing territory, the border waving her by as she travelled into rogue lands. Although she would never have known it, being so young she hadn't memorized locations and where borders had ended and started. The hatchling rose her tired head, sniffing gently as a smell of water caught her parched throat. Grinning to herself, she made her way towards the stream.

Lalani all but fell into the shallow water, the coolness washing away her sweat covered hide as she played in it. She all but downed the water, feeling the liquid cure her of its dryness. Small berries covered shrubs near the water, and the baby hatchling rose her paw to pluck some from the trees to eat. Lalani was starving, thirsty and in rogue territory.

Last night had been a cloudless one, complete with a full moon so bright it had almost been like a night of daytime. It was a sort of night that Neru dreamed of when she woke to evenings of rain and clouds. So, it was no surprise that she stayed up all night and even far into the morning. This was an act only strange when one walking among the light of day caught a glimpse of her flying above, as out of place on the morning sky as a black sheep among a field of white fluff. With a night as such as that, it didn't seem all that different for Neru to be draped over a tree branch, deeply surrounded by the dreams that held her mind like a steel trap. She took no notice of the dragons around her, even the few hatchlings that stopped to tease her with the soft fur of her own tail. In fact, she wouldn't have woken until the night was closing in once more, had she not been roused by the sounds of snapping twigs, and the squeal of a hatchling below her.

The tree creaked dangerously as she started into wakefulness. Considering it was already bent with the weight resting atop it, it was a question of whether it would survive much bouncing and jostling. Thankfully, however, Neru didn't find herself testing that limit, simply rolling off of the tree and taking to the air. The branch snapped up high behind her, and probably would have given her away, had the hatchling below not been so preoccupied with its own fear.

Partially out of sleepiness, and partially out of curiosity, Neru found herself gliding after the hatchling. It took her a good hundred yards or so before she remembered to turn invisible, the discreet actions that pursuit required slipping past her loose mind.

By the time they reached rogue territory, Neru was more alert, and highly aware of where they were. She was used to traveling the Rogue lands; after all, they couldn't find her very easily. A hatching wandering around, however, was easy prey. Even as that realization hit her Neru drifted closer, pushing down the stray thought that pushed her mind to give in and test the sound of ripping flesh on her ears. Instead, she perched on a tree, watching with boredom as the hatchling dove into a stream, finding her way to the berries along the edge within moments. It was at that point Neru drifted the closest she'd dared since she woke, peeking curiously to see if the berries were poisonous.

She wasn't sure if she was disappointed or relieved that they weren't. 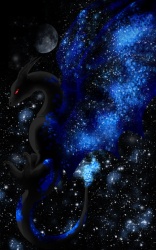 (I edited the post before hand due to some conversation with Occy. Nightflare is still a part of the NightWings, and she's a citizen, but she's been moved to a more or less remote place on the outskirts of NW territory)

The great dragoness sank through the darkness of the mid afternoon sun, here eyes scanning the terrain around her. She generally wasn't this sneaky, as it was not like she was an outcast or anything. But still. Her wings tingled with the slight sense of something nearby. She yearned for activity. Having isolated for nearly fifteen years from other dragons, the great mistress had grown rather even less connected to her morality, being freely allowed to test out her experiments.

However, the sound of wingbeats filled her ears. She spotted a small dragoness overhead. Judging by how their wings sparkled like a star filled sky, there was no mistaking it. This dragoness was Neru. Perfect. And looking over in the other direction, at a small, but vulnerable scent, Night smelled another dragoness. Well, she supposed now was as good a time as any for herself to get noticed.

Approaching the hatchling first, Night would speak, her eyes soft, and her body smooth. One could never suspect her of foul play, for she had the body of a model. And she made it oh so hard for Oculus to accuse her of treason. "Hello, young one, are you lost?" she'd ask in a calm, silky smooth voice, full of charisma, and a trusting aura to it.