Personal Info
Name: Cailira
Alias: Lacrimosa The Quiet.
Age: Young adult.
Gender: Female.
Sexuality: Heterosexual.
Personality:
Cailira is known to be a loyal guard of the  Shadows Refuge, she's very quiet, an observer. One who moves around behind others, trying to not make her presence noteable. She's best in smaller groups, one and one conversation pleases her most. In larger groupes, she'd be seen as paranoid, looking over her shoulder, studying corners and the dragons around her.
In larger groups she seems abit more submissive and perhaps abit scared, doing what she's told, depending on who orders her around.
in smaller groups, she can seem very 'open' and sometimes cocky, again, this depending on who she's with.
She's also a collector, all over her home stuff like, glimmering stones would be seen, hanging from the roof, even mirrors. The mirrors says alot of her, she's unsure and insecure on the inside, while showing diffrent when out. The insecure part shows abit when in larger groups, while she can maintain her pokerface and 'fake' personality when in smaller groups. She even find it abit hard to make friends.
But she also has a temper, easily angered, which can be a problem if people **** her off. She's hot headed, easily angered. quick to take offense.

Fears:
Feeling invisible, people ignorring her. Losing her 'treaure', the glimmering stones and Mirrors. Humans mostly cause they had her captured when she were just an hatchling.

Scales:
Yellow scales covering her belly and  throat while the rest of her is covered with black scales.

Appearance:
Cailira's build looks very slim, large and slim. Very agile. Cailira's scales are black as ink, going all the way down to her tail, while the scales under her body lights up in a yellow colour, due to her Firewing gene. Spikes can be seen from the top of her head, and down to her back, black as ink aswell. Her face is very feminene, with a few spikes aswell from below her head, moving back, to protect her neck from incomming attacks. Her horn also goes backwards.
Large black wings can be seen on her side, the 'skin' between the wings and bones are dark as the rest of her, however very thin.

Strengths:
She is having a good agility, very flexible. Her agility/flexible is over average of a normal dragon. If in a sitiuation where she needs to get out of a grib, she can use this to her advantage.  She is very patient aswell when out hunting, can fly around for hours to find the perfect prey. flight speed, 65-70mph


Special Abilities:
Abilities.. It' not really a special ability, as it comes from the firewing blood, that runs in her vains. She can breath flames. her ability to breath flames, which comes from her Firewing blood, that runs in her vains. The beam of fire is at a reach of 98 feet, smaller then the reach of a full breed Firewing. And the flame itself is 1000f. The speed of the fire beam is around 40mph. The beam only last for a half minut..

Weaknesses:
One of her weakness are her being hotheaded, easily angered, due to her paranoid nature, which is also an weakness. To be hotheaded and paranoid, the paranoid happens if she is in bigger groups. She is constantly hiding her true personality, as she is scared, which can be a problem if someone pokes it to much, cause then she'd seem vulnerable. Also a weakness is her ability to breath flames, which comes from her Firewing blood, that runs in her vains, while a Firewings flame is on a scale of 10/10 in it's heat, hers is a 7/10, which means it's not even that hot, like a real Firewing. If she should get into a fight with a Firewing, this would be her weakness.


Combat Style:
Fighting style is very primitive, she uses both claws and teeths. Even her wings if she can get to it. Tail aswell if nessesary. She uses her surroundings in her combat, trying to use it in her next move, exemple. Being in a forrest, she'd try to smash her opponent back against the trees, to get them fall down over him, so she has the upper hand, or she'd use her flames, when bitting.

History:
When Cailira was an egg, she were found by the humans, only because her mother were moving her to a more 'safer' place. Her mother laying down beside her, defending her with her own life at risk.
After hours fighting, her mother lost her life, to protect the egg, and the humans walked up to take it. They could just have destroyed it but they didn't. Instead they took it with them.
Time passed and the egg hatched, the small Cailira came out, not even a second after she were thrown into a crate with a few small holes in it, to be able to breath.

Food were dumped down to her from one of those holes, so she could just survive. And one day, when she were grown abit, placed into a new crate. They treated her like a pet, or rather like an animal they were to slaughter at some point, but this day everything changed. From one of the small holes, Cailira could see another dragon not far from the humans, but it were only for a few seconds then the dragon where gone. She could then hear fighting around her, roaring sounds, bone being ripped apart. Even feeling something hitting the crate, something rather large, like a human. The smell of blood reached her through the holes.

As the fight slowly calmed down, the dragon moved closer to her crate, but it was now she noticed, it were not only one. this dragon, it's steps were heavier then the others. She looked out from one of the holes, seeing this brute of a dragon. She had never really seen a dragon before, she was scared. She cumbled together as the big dragon, called Nerokius moved his head down to grab the crate. One of his sharp teeths moved into one of the holes in the crate. Cailira Stared at this tooth for 'ages' before the crate was placed down and Nerokius moved away.

More steps would be heard, more calm, as another drake approached her crate. She only dared to look out for a few seconds to see a drake, covered in deep violet scales, of what she could see. The eyes metalic blue, he looked down onto the crate which made Cailira move to one of the sides, of the crate, hiding her head under her wing. Shaking like a scary. scared.

As Tenebris opened the crate, he'd find the small drake, hiding, scared for her life. A drake that never had seen another drake, a drake who never had been out of the crate for more then a few seconds.
After hours trying to calm Cailira, Tenebris succed, even seeing she were not a fullblood nightwing. She could hear the dragons talk in the background, as Nerokius and his group started to take positions around Tenebris, Guiding them both back to the refuge.
Here Cailira got her own place, her room. And Tenebris started to teach her, in history of the nightwings. He soon became close to Cailira, as a father figure. Only to get a name, given by him, Lacrimosa..

RP Sample:
The night was quiet as always, the refuge seemed more quiet then normal, and Lacrimosa was as always, in her room, studying one of her glimmering stones, while books were placed all around her on the floor. She tried to be as quiet as possible, not to wake anyone in her. Her tail moving slightly from side to side in amusement.

//New char. Please delete my old one. Cailira the Whelp // 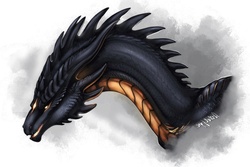 Strengths:
Ok, so this is WAY too generic with no detail. Describe your agility. What is your top speed? Just how flexible are you? And for the breathing fire, I would move that down to special abilities instead of strengths, and include how hot it is, how long you can maintain the stream, and how far it travels roughly.

Weaknesses:
For these, you say she is hot headed, but in what way? Is she easily angered? Do certain things set her off? Rest is fine, but you could remove the fire part as that should be explained in special abilities, or keep it in weaknesses. Fits in both places.