With a triumphant roar, the lean Nightwing slammed down onto his prey's body! His lengthy claws sinking deep into the Stag's flesh and ending it's life swiftly.

Atronax craned his neck and closed his eyes, taking a long deep breath as his long, arduous hunt finally came to an end. The male dragon was thankful that no one else was around to see his epic failure of letting a simple Stag evade his teeth for two consecutive days. Alas, after his breif moment of reflection, Atronax leaned forward to sweep the Stag's carcass up into his maw.

His jet black canvasses for wings spread outward and were about to lift him high into the sky when he froze on the spot.. He looked around, sniffed the air, scanned the trees around him and looked up to the clouds.

He was suddenly very aware of where he was. How far his hunt had taken him. How long he was flitting through the skies. The spikes on his spine each stood on end and a shiver spread across his scales as it dawned on him. He was in the very last place on Pyrrhia he wanted to be... 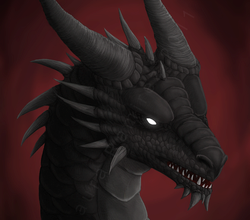 The eastern dragoness healed properly, thankfully to the mud healing Ren did on her. However, her scars were very obvious and would lake longer to fade. She didn't really care though, looks were looks. Parts of her mane were singed black, parts of her scales were scrapped and torn off. Luckily, the bases weren't taken off, so the scales would grow back soon enough. The hair would grow again, though Relonikiv snapped up a few roots to speed the process up.

Walking through a canopy of trees, the large she dragon could smell blood faintly, along with another dragon nearby. As much as she feared doing so, she could feel her stomach let off a deep rumble. Hopefully the dragon left some parts of its' kill, or at least would share. She wasn't exactly a meat lover, but wouldn't mind eating what she didn't have to kill.

Picking up her pace a bit more, Relonikiv's nose took the scent in stronger, trying to decipher where it came from. It was unlike any scent she caught before, and was quite curious about it. The pale dragon finally saw the small, black dragon with the kill in his mouth.

He almost looked frightened to be where he was, though that was just a simple reading. The pacifist came closer, giving off a loud, welcoming chuff. Though she was antisocial, she wanted to at least show her presence rather than intrude or come off as some spy.
_______________________
Relonikiv's Info 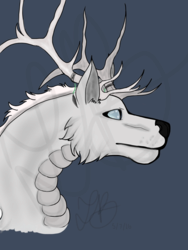 Atronax perks his snout upon picking up the scent of another dragon and snaps his head in the direction of the new arrival. His bright white eyes soften from their alert stare to an expression of wonderment as he sizes up the Dragoness before him.

With a slight tilt of his head, the spikes lining his spine returned to a flattened posture and his chest puffs out, drawing from a wary crouch to his full resting height.

The young Nightwing hybrid can't help but angle his gaze along the freshly inflicted scars dotting Relonikiv's otherwise perfect form. With a soft puff of steam from his snout, he let's the Stag carcass fall to the ground at his feet.

Two days and nights straight of flying and tracking have built up quite the appetite in Atronax; Alas, he plants a clawed paw against the hide of the Stag corpse and leans forward to tear off an equal half of the animal with his razor sharp fangs and nudges it towards Relonikiv with his snout. It's clear he picked up on her rumbling gut a mile off.

...To a keen eye, it may seem Atronax is quite smitten with the Dragoness rogue.