Latest topics
» Alliance Hunting Party (All alliance members and trackers)
by Noctis Umbra Today at 8:53 am

» Foray Into The Frozen North (Tharasis) DP Submission
by Noctis Umbra Today at 8:28 am

» Recreational Break (Incus)
by Incus Today at 8:03 am

» Foray Into The Frozen North (Tharasis) [Finished, awaiting review]
by Noctis Umbra Today at 7:51 am

» Looking to rp with anyone
by Baldirak Che'le Today at 5:59 am

» Two Heads are Better than One (Twilight Imperium)
by Tharasis Today at 3:43 am

» Double Trouble (Open to All, Located in Twilight Imperium)
by Tharasis Today at 3:32 am

» Festival of ascendants (Open to All)
by Tenebris Yesterday at 3:07 pm

» Captive-Born Meets Held-Captive (Tenebris)
by Tenebris Yesterday at 11:45 am

» Fishing in the Dark (Seawing)
by Tenebris Yesterday at 11:43 am

» Harsh Realities (Open to Humans)
by Tenebris Yesterday at 10:46 am

» Unlikely Pair (Addali)
by Tenebris Yesterday at 9:56 am

Searching Through the Ice and Snow [P Kyuurei]

Searching Through the Ice and Snow [P Kyuurei]

The sun was shining brightly, its beautiful rays reflecting off of the shimmering water, where Rayla, having taken up the new name of Iizus, now resides. It was roughly fifty degrees out, too warm in the reptilian's opinion. She didn't like this heat, so she was resting under the shade of a great pine tree, her feet resting gingerly in the water.

Thirsty, she reached down, pulling out a flask, and filling it up, the river water doing its job, and over flowing it with rich, mineral filled water. She would then raise the flask to her lips, drinking gingerly.

Once she had cooled off, she let out a sigh, and looked out over the water. The river was quite wide, being about ten meters across. Smaller than some rivers she'd seen, but pretty big for the rivers around here.

But now Rayla was beginning to miss flight. She missed her dragon form, of which she hadn't transformed into in nearly three years, having lived off the land in her reptilian and human form. So maybe, just maybe, it wouldn't hurt to let loose a little bit? There were no dragons around, at least none that would recgonize her.

Standing up, the reptilian let out a breath. Her body would begin to glow brightly, quickly morphing into the shape of a dragon. She was concealed by trees, so no one would see. Once she was in her dragon form, she shook her limbs out a little bit. She wasn't used to this.

With a test flap of her wings, the dragoness would look to the sky, examining it for any other dragons. Being quite small for a Seawing and an Icewing, she hoped her size would make it hard for any patrolling Icewings to spot her. After all, she was deep into rogue territory, far away from Icewing lands. No one would see her.... right?
_______________________
Virgo♀ - IceWing Queen(Age 14)
Rayla♀ -  Demi Goddess Rogue(Age 40)

Kyuurei was wandering far away from his home again. Yeah he wasn't supposed to leave the Icewing territory for that long AND without permission, but exploring the rouge lands was still the best boredom curer for him.

As he preferred to explore by walking to flying, he continued trekking along the path of the forest filled with pine trees. He was walking around for so long he looked back north-east to check if he could see the snowy mountains from the Icewing lands still, and he couldn't see it anymore. Probably because of the mountains and trees around him are blocking his view. Well, he still need to go back before anyone find him missing...

Kyuurei decided that he will take a drink from the nearby river before heading back home first, and so he did. He headed over to the river flowing with luscious water. While unaware of his surroundings, he took a sip from the river and he made a face when something is too sweet, he hadn't drank anything this sweet in forever. Might as well to drink some more.

Once Kyuurei had finished drinking, he sat down and looked up. But before he could let out a sigh, he panicked silently when he saw a dragon behind the trees(I think?). It wasn't clear to make out what dragon it is but, it somewhat looked like an Icewing. Thinking that it was looking for him because he was in trouble, he ran off and hid behind a rock. Hoping that he or she didn't notice his presence. If an Icewing caught him, they just probably keep him inside the Icewing territory more, and he doesn't wants to risk getting caught. He took a peek at the  Icewing again, it seem it hadn't noticed him yet, well that's good. However, Kyuurei doesn't think he or she is part of the Icewing tribe because of how far away this land from the Icewing territory... 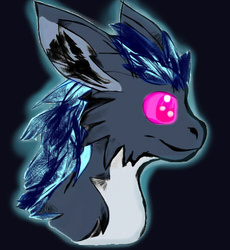 //Short post because I don't have much to say since you took no notice of me... This doesn't look short .-. Oh well//

When Kyuurei slowly went out of his hiding place to look for the dragon again, it had disappeared in a flash. Well it took no noticed of him which is good, but he was a little puzzled that it didn't notice his snow prints that literally leads him to his hiding spot. He was pretty sure that everyone in the Icewing tribe knows that he leaves snow behind, so the dragon wasn't looking for him after all...

Kyuurei was going to call it a day and head back to Icewing territory but... Something didn't feel right for him to leave yet, something about this dragon. Kyuurei sort of have the feeling to find him/her, but his other feeling about this tells him that was a bad idea to fly towards a stranger like him/her. But this feeling was gone when Kyuurei was convinced that the dragon he had sighted was an (used to be) Icewing, like him kind of. So Kyuurei took flight to the sky.

He usually don't fly often as he hadn't practiced it enough and he had gotten a lot of injures just from flying. It doesn't help if his wings are made of easily broken but recoverable feathers, especially when he is flying at a high altitude... Not really fun for him right?

Kyuurei looked down to the shimmering water below him before he reached land again but this time it was filled with snow? Where was he now? Well he ignored the question as there was one thing he was curious about...
As he was still flying, he saw a trail of ice on the ground, it was rather out of place which make Kyuurei thought that this was left by an Icewing and so it may be around here. Kyuurei decided to land onto the field of white, soft snow. Unfortunately, his landing was a bit clumsy, he crashed into the snow and now he has a pile of snow on his head, body and tail. Kyuurei got up and shook the snow of his fur, hoping that no one saw him landed like that.