Latest topics
» Finally Meeting (Paradox)
by Soshi Today at 7:10 am

» Isle of Storms (Open)
by Noctis Umbra Yesterday at 4:38 pm Personal Info
Name: Aerabula
Alias: Aer the Scholar
Age: 526 Human Years
Gender: Male
Sexuality: Heterosexual
Personality: Aerabula is a rather calm and docile dragon who takes the time to enjoy every moment that he has. Patient by nature, Aer is quick to forgive and slow to anger, and at his worst, Aerabula's bark will most likely be worse than his bite. These qualities make him an excellent teacher, which works out nicely because he thoroughly enjoys passing knowledge on. It is also because of his docile nature, that Aerabula will avoid physical conflict as much as possible. However, he does enjoy teasing others, as well as shows of verbal wit. Aer enjoys the the pursuit of knowledge, as he is a scholar, but his love of learning goes beyond his rank. Aerabula would do just about anything to prevent the ignorance of other dragons, and that includes fiercely protecting troves of knowledge, or even resorting to violence if necessary.
Interests:
-Sleep
-Read
-Learn
-Teach others
Dislikes:
-Violence
-Ignorance
-Extreme Livelihood (I.E. Flying around speedily, over-boisterous younger dragons)
Fears:
-Fire: Aerabula doesn't fear fire itself, but he is wary of its destructive properties, especially for books.
-Ignorance: Aerabula constantly fears for the day where a generation of Dragons will emerge, completely ignorant to the world around them. He also fears the day that dragons will once more underestimate humans.

General Appearance
Height: Aer stands at 10 feet, but his length is 60 feet.
Scales: Aerabula is entirely blue, but the more 'bonier' of his scales, such as the ones that line his back, or the horns near his face, are a slightly lighter shade of blue.
Eyes: A very light shade of blue.
Appearance: Aerabula is very different from the standard SkyWings dragon, and the first thing that one notices is his different body shape. Aer is an oriental dragon, and so he is much thinner and longer than most dragons. He also doesn't seem to sport any sort of wings, but he is still able to fly. For the most part, his scales are one shade of blue or another, which is another anomaly for a SkyWings. Aer's first pair of legs are situated about a quarter down the length of his body, and his hind legs about 2/3's of the way down. His tail ends with lengths of fur, that are of course blue.

Skills and Abilities
Strengths: Aerabula, like other SkyWings, is quite capable of flying at very high speeds when necessary. His thin body also makes maneuvering in the air quite easy, and he can also squeeze through tighter gaps do to his body shape.As a scholar, Aerabula is also quite clever, and can often think of crafty solutions in sticky situations.
Special Abilities:
Memory Link - Aerabula can present one of his memories to another dragon if the memory was vivid and memorable enough, and both parties must be in a relaxed state. The both dragons are put into an almost sleeplike state, and the recipient sees through Aerabula's eyes during the memory.

Cloud Breath - Instead of the standard gusts of wind that other SkyWings can create, Aerabula is instead capable of creating poofy white clouds.

Weaknesses: While Aerabula does possess the ability to fly quickly, as other SkyWings do, he can not maintain this high speed for anything longer than a few minutes, as he quickly tires. In fact, Aerabula's normal flying speed is quite slow by dragon standards.

Combat Style: Aerabula's general combat style is to first, avoid the combat. If that's not possible, he then tries to escape the combat by fleeing. But of course there are situations where Aerabula will have to fight. Because of his scholarly rank, he is definitely inept at combat, and his oriental body shape doesn't help either. The most that Aerabula can do, is attempt to disorient his opponent with his cloud breath, and go to work biting and clawing wildly. Another tactic that Aer might utilize is wrapping his long body around his enemy, in an attempt to strangle them.

Background
History: For the most part, Aerabula has lived a fairly normal life. He grew up amongst the SkyWings, however, his parents went missing from an early age, and can be presumed dead. From the beginning, Aer exhibited a fondness for learning, which would later guide him into being a scholar. In his young adult years, he did spend some time as a messenger, and even explored in human lands for some time.
RP Sample: The monotonous rushing sound of wind filled Aerabula's ears as he leisurely flew through the clear blue skies. His whiskers trailed back beside his face and brushed passed his eyes every so often, but he didn't mind. The blue dragon's body weaved side to side as he gracefully streamed through the air, and his legs kicked out occasionally, swiping at the ground that was that was so far down below. Up ahead, Aer could see a small, floating island growing steadily closer, and he grinned toothily. As he approached, Aer picked up his speed, his side to side weaving growing faster and faster until he wasn't even weaving at all. At the last possible second, Aerabula pulled up and away from the small island, before gently landing on the platform with a puff of dust. With a small nod, Aerabula began walking through the streets of the small community, greeting others with a smile. "Hello. Good afternoon. Nice to see you..." The greetings simply rolled off his tongue, and with a content sigh, Aerabula finally made his way to the library, which entered with some flair. 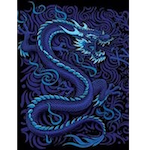