Insert Image Here
Personal Info
Name: Kythe Erquin
Alias: Cloo
Age: 25 Human Years, 750 Dragon Years
Gender: Male
Sexuality: Bisexual
Personality: Ever since Kythe was small, he has always strove to improve himself. Unfortunately for the dragon, he is a big clutz. He trips over his own feet, tail, and is the bull in the metaphorical china shop. Despite these inconveniences, Kythe still loves to learn, and loves all those who are willing to teach him. He makes a horrible teacher though, and often is as clumsy with his words as he is with his feet. He is friendly, and willing to change for anyone. Kythe is an eager and houses a heavy patience within him. Attentive, friendly, and eager are three general words that would describe this lively dragon.
Interests:
~Learning
~Excelling
~Being Useful
~Teachers(Not Teaching)
Dislikes:
-Teaching
-Putting a stop to his learning
-Chaotic and unwilling individuals
-Impatient people
Fears: Kythe has an intense unhealthy fear for the ocean and large deep bodies of water
General Appearance
Height: 40'
Scales: Kythe's scales are almost perfectly snow-white. with a slight gray hue towards his inner belly and wing webbings. His horns are a golden color, and his overall colors change with his mood.
Eyes: A vibrant bright shade of purple
Appearance: Kythe is slimly built and is quite agile. He usually wears a set of light plate armor and has a single silver-metal claw on his front-left foreleg. His wings are smaller than most dragons and allow him to make tighter flight maneuvers.

Skills and Abilities
Strengths: While Kythe is not very strong, he IS very fast and agile. Kythe is a student and has been yearning to learn all his life. This has strengthened his mind greatly, and has given him a patience that would match a rock.
Special Abilities: Wise Gaze: Kythe stares into the eyes of another Light Wing, and only a Light Wing, and is able to attempt to calm the dragon down. If the dragon's mind is accepting of the gaze, they will find their mood lessened, i.e.: An angry Light Wing is about to fight another. Kythe would gaze at the angry dragon and if that dragon does not truly want to be angry, they will be calmed down. However, if the dragon say, wants to start a fight or want to be angry, Wise Gaze will have no effect.
Weaknesses: Darkness as most Light Wings have a weakness to. Chaotic people who he cannot understand and learn about, being too unpredictable. Unpredictability - Kythe uses his vast knowledge of dragon behavior to judge and predict what they may say or do. When he meets a dragon who Kythe can't predict, it puts him in big trouble.
Combat Style: Kythe is fast and is all about predicting the other dragon's actions. He has a single metal claw he uses to fight, for anymore would be gruesome and inhumane.

Background
History: I'll leave it a mystery
RP Sample: Kythe could not believe anything he was seeing. His prehensile tail flicked back and forth behind him, betraying his distraught mood. His scales slowly shifted into a greenish hue as Kythe took a few steps back. "Stop, wait, who are you?" Kythe was worried at this point, for the dragon in front of him now, black and adorned with powerful muscles, was unpredictable. The dragon still came forward towards the displeased Kythe. "W-We can talk about this, I'm sure!" Kythe opened his eyes, and he was upside down. He was hanging from a great tree by his tail. Kyhe let out a deep sigh, and chuckled quietly to himself. A dream, yea, that's all it was. 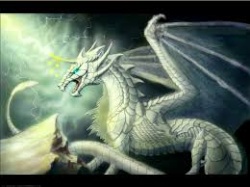 This looks good. The only thing you need to fix is his speed: "...and can move like a blur when he needs to". This is something a SkyWing would be able to do, not a LightWing. Change that then I'll accept it. ^.^

Baldirak Sapiens Draco wrote:This looks good. The only thing you need to fix is his speed: "...and can move like a blur when he needs to". This is something a SkyWing would be able to do, not a LightWing. Change that then I'll accept it. ^.^