Independance is loneliness. (Priv for Aevon)

Independance is loneliness. (Priv for Aevon)

Asvania was a strange little thing. She had spent most of her life on the run. To say the least her mother had been a big meany throwing her out one day and leaveing her. Ever since that fatefull day she had slowly lost the innocence most hatchlings possese and grew skittish avoiding adults like the plague. She wanted to leave the city but she couldn't It's food supply the thing that held her rooted to the place. It was lonely for her but she was not scared haveing been hardened by the ordeals and fights hatchlings should never see. Whilst moat hatchlings never learned to fight she had to smaller predators finding her a very precious treat to own. That and the adults... They kept trying to catch her but she was not going to let them hurt her like her mommy! Today she had found a nice open barrel of meats and was scrounging on it her thin body purring a bit in delight. This was until a fox came around and starting prowling. She was quick to notice and tried to growl at the fox but despite her toughness that part of her voicebox was not devoloped and all that came out was some funny sounds. Raceing around a corner the fox giveing chase she stops and waits just out of sight. As soon as that red muzzle pops up she gives it a hard nip leaving the fox squealing out and quickly climbs up the fox biteing and scratching territorial over her food. The venom leaking from her teeth was a pretty good sign of why the fox was so distraught squirming under her.

Aevon had been bored recently, he disliked most of the other hatchlings, they were either too busy with one another or they were too much of a Nancy to even wrestle, or rough play for a bit. Aevon had escaped from his home, just for the fun of it. He usually liked to worry everyone where he was, but, it was like hide and seek for him, just he gets int double when he gets caught. Now, now, while he was obedient, 50% of the time he was rebellious, which caused some problems, like the time he refused to eat food for three days, this was because he had a hefty meal before those three days and his metabolism is slower then others, so he can conserve a lot of energy this way.

As he would travel around, Aevon had seen two blurs pass by in the distance, one of which seemed like a fox. Smartly, he would hide behind what cover there was and would investigate. For his age, he was smart due to Cosmos teaching him many things, so he knew how to get around certain objects. As he neared he has seen what looked like a hatchling jumping on the fox and biting, seeing the fox struggle, he sat there and waited, waling to see what would happen.
_______________________ 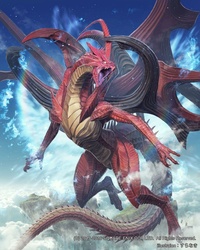 Asvania fought hard against the fox as it squirmed and bit up at her. Avoiding its teeth was not as hard as it normally would be the fox slowing by the minute. Each nip made her opponent crie out in pain from the venom until after a bit the fox stilled out cold. Asvania sniffed the uncontious fox the fresh smell of blood makeing her hungry. Afterall its not like the fox wasent planning on eating her just moments ago... She licked her maw eagerly tail wagging not at all traumitized as most her age would be after nearly getting hunted.

Aevon neared closer, finally stepping from the shadows. Was this hatchling going to eat this fox? He hoped not. He would give out a share growl, to see what the reaction would be. If all and all failed, he would simply prep for a little fun. Aevon knew what he was doing, that fox was only following its nature, not that he cared, yet, he just wanted the pelt oft he fox, not he flesh or anything else.
_______________________

Asvania was quick to react a growl leaving her at the sight of him. She narrowed her eyes watching the other a paw protectively over the fox. She could tell this hatchling didn't know real hunger by his shape. Each piece of food kept her alive that much longer and she couldnt afford to let a well fed hatchling take it from her. She didn't attack tho waiting for his reaction.