Personal Info
Name: Swirlwind
Alias: Swirly, Swiri , Swirlwing etc...
Age: 18
Gender: Female/ Dragoness
Personality: Swirlwind is rather an outgoing and kind Dragoness at first impression who tends to act 'cool around dragons. Swirlwind has a very odd taste in fashion and she also likes to fly around all day (if she wants to) and having fun with others. She also likes to cheer up others if they are unhappy and sometimes help with their problems as a part of her nature which she tries to please others as much as she could in her ability. Even though at times she couldn't resist to tease others for the fun of it. She is quite a sneaky slacker especially when she is in middle of a duty/mission where she is left alone to do so, she get bored quickly and slacks off. So whoever is mentoring Swirlwind needs to keep an eye on her at all times! When she gets serious, she can get bad tempered and when she thinks something is wrong, she desperately tries to warn others, listen to her if you don't want to hear the expression 'I told you so!'. Swirlwind has a very creative mind and she loves to do creative stuff (You know what kind of stuff) and she tends to get overboard with the decorations...
Interests:
~Flying, all types, (Racing, Dancing, Diving etc)
~Having free time to do her own things
~Fasion/makeup
~Her looks
~Pleasing others
~Socialising with others, that way she has an excuse for being 'side-tracked'
~Inventing, painting, and designing, good ways for her to pass time.

Dislikes:
~Being ignored when she was asking them something
~Dragons who don't listen to her.
~Getting scars and wounds on her beautiful body
~Being scold for "Not doing her duties"
~Being on ground for too long

Fears: Swirlwind hates the thought of losing the ability to fly permanently and have to walk on land forever. (And join the Earthwings ayy)

General Appearance
Height: 26ft
Scales: Glimmering white with dimming black stripes along with silver scales and reflective gold underbelly/spines
Eyes: Electric blue
Appearance: Silver-white-black dragoness with a gold underbelly. She has 6 black horns on her forehead, three pairs of patterned fins that helps to generate more lift. A pair of wings, the 'bony' parts are black and the membrane is pale gold with black markings. If you notice that Swirlwind has glowing Blue tips, which the means the lightning she shoots are blue/white. Swirlwind wears a bright red scarf around her neck and she is rarely seen without it.

Skills and Abilities
Strengths: Swirlwind is a brilliant and swift flyer as she practiced flying everyday. She has a very creative mind and she can invent, build or decorate things to her likes, sometimes she can go overboard with being creative...
Special Abilities:
Electric shock: Swirlwind sends out some electric out of her body, shocking the things around her. She only does this when she is angry or surprised. She has enough volts to power a small machine (30 ft max) and to charge a battery but not the entire kingdom.
Weaknesses: Swirlwind isn't much of a fighter. Even if someone tried to train her, she will refuse to fight.
Combat Style: Let the machines and Skywings do the fighting... 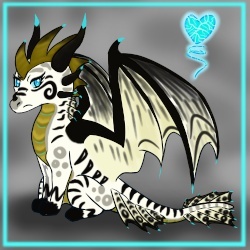 Also being able to fire 5 lightning strikes in quick succession could be a little overpowered due to the speed and power of one strike alone. Nerf the lightning strikes so that firing in short amounts of time would make them weak (you can already charge one lone but powerful bolt anyways).

Bump, is this better?