The Dying Vulcan (EW only.)

The Dying Vulcan (EW only.)

The day was still young the sun high as a large dull red dragon sat on a cliff side wrapped in a cloak made of thickly woven vegetation. Huffing smoke from from vent over his body he proceeds to continue a long task. Gem sorting having moved around alot he only found some gems of worth.  He held up a blue gem to the sun its color was a creamy blue as he looked at it in the like hunks of rock clung to it as it was only raw and not cut yet. "Sea blue in color... few fractures, might be worth selling to those humans." with that he set it down to the side and picked up a milk white gem and bites on to it and chomps down on it like it was candy. "quartz, I hate quartz." Levish then picked up a huge rock filled with unrefined minerals Coated with some small . "Looks like... Wolframite This could be handy later just need to remember where I found this." Scratching his head and looked to the sky and let out another huff and explodes from every vent causing the heavy cloak too waft  with a thick black smoke.  "Maybe it was with that quartz." He begins to hack and cough as he was slowly dying from a strange illness, it was keeping him from flaring up like a fire ball. Covering his muzzle as to hold back the cough he had that echoed through the forest valley below.  He leaned against the rocks behind him. 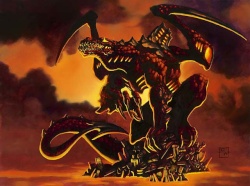 Re: The Dying Vulcan (EW only.)

Today, Baldirak left his Lieutenant in charge of things while he made a trip to the Lush Forest. As always, his Royal Guards accompanied him, but there was one unusal happening: only one of the twins was present. Hamnet was ill and had been ordered by the Head Healer to remain in the Haven,leaving Hapax alone. Neither were too happy about the idea. But Baldirak was relieved--of course he wished a swift recovery for Hamnet, but without his twin, Hapax would be silent the whole trip. For most of the way, the two EarthWings flew high, above the clouds. They didn't want that someone from another tribe should see them. After they passed into neutral territory, they went below the clouds, Baldirak smiled as he was able to see the Forest in the distance. And then Hapax noticed something off to the left of their destination, near some cliffs. Thick, black smoke. What could that be? The Royal Guard alerted his King with a nudge then pointed down to the smoke. Baldirak changed his course and together they flew down to investigate.

Re: The Dying Vulcan (EW only.)

(Mind if i poke my face in here after we finish the new city topic. Im very picky on my time ordering as baldi knows lol)