Top posting users this month
Who is online?
In total there are 3 users online :: 1 Registered, 0 Hidden and 2 Guests :: 1 Bot

Personal Info
Name:  Yalaruh (Though, if you become her adoptive parent, you may name her!)
Alias:  Young One, The Innocent, Yama
Age:  15 Years
Gender: Female
Personality: Yalaruh is soft spoken, and often cautious around most new people. She can be quick to make friends, but there isn't anyone she will often really connect with, due to her fear of betrayal. She is generally very thoughtful and analytical, and makes judgments based on a mix of emotion and logic. She likes magic, but prefers potion making, apothecary and alchemy type stuff.
Interests:
Yalaruh is often soft spoken, but she has gotten more interested in becoming a powerful warrior. She loves having fun and enjoying herself, and likes to learn about history of the skywings. She also has an affinity for herbs and medicine, and likes to mess around with potion making every now and then, though she isn't any good at it.


Dislikes: Yalaruh has a fear of heights, and dislikes them. This is because she still isn't entirely sure how to fly yet. She also dislikes hot weather, and generally prefers cooler temperatures.

Special Abilities: Lightning Strike - Yalaruh is able to generate electricity and launch a concentrated blast at her enemies. This can reach up to 20 meters. She can only use this power every other post. Can cause searing burned scales if it hits, but may only leave scars if left untreated.
Weaknesses:  Her youthful ignorance, her familial issues, and her small size, as well as the fact she is a newly trained tracker and still healer in training. 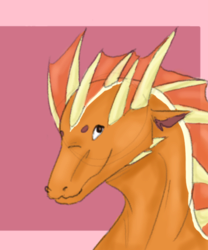