Cradore opened his eyes. He had just woken up and was still dorwzy. He was still not used to his new life. Cradore stood up and looked at his den. He grabbed a bucket and put it on his tail. He left and walked to a well.

He got to the well and dropped the bucket into it. He thenpulled it back up and grabbed it. He walked back to his den and put it in a hole about the size of him. He was gonna take a bath. He repeated these actions about sixteen times nad the hole was three quarters of the way full.

He stopped with the last bucket and pours it in. He threw the bucket away and slowly walked into the bath.

Gargantuan wings stretched and closed once more while the female dragon walked out of her healing den. Though she didn't want it, her father had requested she had quite a large healing den. Long tail lashed left and right almost like a cat. A crown of horns sat upon her head and shrunk slightly. It was a power she possessed because she could control nature. Her horns had been made of bark so she could make them bigger or smaller.

Reaching the outside of her den, she opened her wings and launched herself into the air, pumping her wings quickly and lifting herself into the air. Ice blue eyes opened and spotted a fellow Earthwing. She had yet to meet many of the Earthwings and still needed to be quite a lot of them. She was almost always in her den healing different dragons and making sure her father stayed healthy. Though he was perfectly fine, she was worried for him.

Cradore closed his eyes and laid into the water. The freezing water numbed him and soothed him. His muscles relaxed and he slipped into a half-asleep state, while also being aware of everything around him. He threw his wings out and into the water. His wings shivered for a second before becoming numb also.

He opened his eyes and stood up thirty minutes later. Refreshed, he stepped out of the water, scales dripping. He shook himself. He went to a wall in his den and looked at his shelf of scrolls. He took one out and rolled it out on the floor. He laid down and began to read it.

It took a moment before she let her eyes move away from the dragon and she began to fly. Only when she came back, the dragon was gone. Different parts of the ground were covered in bits of water and easily she was able to follow him, eyes moving over the wet spots curiously. Seeing the dragon, she descended from her spot in the air and folded her wings to her sides hesitantly. Well she supposed it would do her good to meet more of her tribe members. Shaking her head, as she was slightly nervous to say hello to this dragon, she pushed away her nerves and followed the water trail.

She ended up at a cave but instead of being rude, she stood by the entrance and poked in her head hesitantly. "Hello?" she called out in a soft voice, blue eyes scanning the den curiously.
_______________________
This is Luna on a different account!

Cradore flipped over as he heard a voice. He sighed with relief when he saw the dragon. ”Uh hello there! You scared me.. Whats your name?" He stood up and rolled the scroll back up. He put it back on the shelf. He turned around and motioned for the dragon to come in. He sat down and watched her.

A soft chuckle left her when he had admitted to him saying she had scared him. Dipping her head lightly, she smiled softly once more. "I apologize for frightening you." the female apologized, ice blue hues meeting his own. "My name is Sorrell, and yours?" she asked, tilting her head ever so slightly at the male dragon.

Seeing his motion for her to come in, she entered his den hesitantly. With a nod of thanks, she settled down near the dragon, tail curled closely around her in fear of knocking something down. 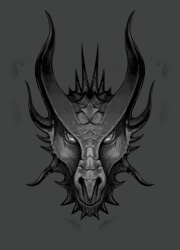