My name is Atrex. I'm your typical male with female problems. And I'm the fiur winged drgaon witht he golden scales..

(Please remember that this is similar to the exact post from the origonal roleplay. Do NOT reuse this post without giving me and Athena the credit)

[i]Atrex glided shakily over the shallow sea water. His second test flight and he was doing well. He was a natural flyer, his back wings providing greater thrust and lift. He extended a claw and gently grazed the water. Laughing to himself, Atrex closed his eyes.

Atrex opened his eyes and had barely registered the dragon in front of him before they collided and the water covered his face. He gasped and stood up, but groaned at the pain in his head. He looked over his shoulder to see a dragon lying in the surf, slowly rising. "Hey, are you okay?!" He exclaimed, walking towards her. The dragon raised it's head and Atrex stiffened. She was breathtaking.. Her face was fresh and young, his age, and blue feathers travelled down her white neck. She glowered at him. "Keep your eyes to yourself!" She hissed, steadying herself. Atrex flinched. "And watch where you're going!" She snapped. Atrex giggled nervously and rubbed the back of his neck with his wing. "Ehehe.. S-sorry. I'm Atrex." The dragoness rolled her eyes. "Athena." Atrex tilted his head at her next words. "So what's your plot, flyboy?"
He shrugged. "Just decided to do a test flight. Test my wings." He extended his four wings and Athena raised an eyebrow. "Four wings? Never seen that before, flyboy." She walked up to him and sniffed his neck. Atrex laughed, he was very ticklish. "Hmm.. Hybrid," he heard her mutter. It was impossible to tell what this dragoness was thinking.. Athena pulled back and raised an eyebrow again. "Tell you what, you'ee not bad for a starter. Want to fly together? It would help us both," she offered. Atrex grinned. "Really? GREAT!" He then caught himself and shook his head. "I-I mean.. Sure. Why not?" Athena cracked a smile, and that was the first time he'd seen her with a smile. /i] 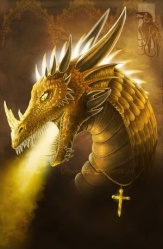