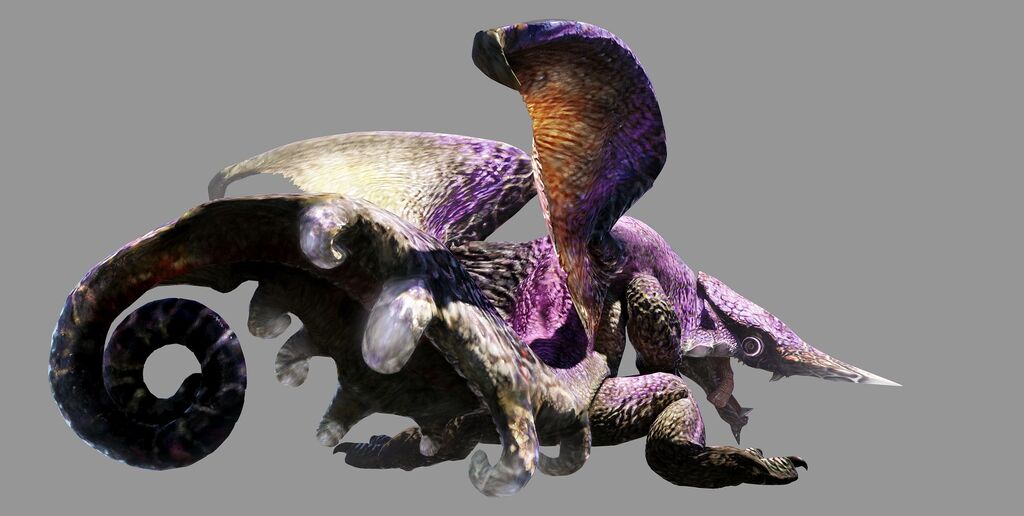 Personality: Sabnohg rarely speaks seriously. Utilizing his individual (yet questionable) sense of humor, phrases barely ever leave his mouth without a joke or two sprinkled in there, often with unfavorable or counter-productive results. While others may find him to be irreverent or ignorant, he merely jokes around to make his emotions harder to read. He's quick to become absorbed in anything that interests him, going to great extents to obtain data and information. While his lack of a serious attitude makes him seem irresponsible, he is faithful to those whom he deems to have pure, noble, or simply agreeable ideals.
His intelligence is another quality cloaked under calumny; he's quick to question anything that goes against his accepted, science-driven logic. May become over-analytical in a favorable situation.

General Appearance
Height: 11'
Scales: Neutrally, they appear as being a violet-magenta, getting lighter as they reach the belly and underside. May appear to be virtually any color once camouflaged.
Eyes: Eyes are translucent, lacking a distinguishable color. While big and bulgy, they're mostly covered by skin.
Appearance: Sabnohg's general looks fit his personality quite well. Featuring large eyes, a long tail which curls up while not in use, prehensile hands, and a stretchable tongue, his general aesthetics greatly resemble those of a real-life chameleon. Adding to this, his three-fingered claws, curved wings, and sharp horn complement his draconic aspect. His scales, while variable in color, stand out from other dragons' for donning a vivid coloration between the likes of violet and magenta. At the very root of his tail, Sabnohg features a concave formation, utilized for flight stability.

- Because his bones are hollow, he is extremely light.

- His light weight and strong, sturdy tail allow him to hang from trees, rock formations, and even large icicles.

- Having his eyes located on the sides of his head, his effective vision range covers almost every angle around him, save for anything directly in front of, or directly behind, his face.

- Has a stretchable, sticky, and nimble tongue. It's powerful enough to snatch weapons and items away from other dragons, but not strong enough to support Sabnohg's own weight. Even if cut, it will regenerate after five posts.

- Its curved wings allow for extremely tight turns in the air, featuring matchless maneuverability. However, because of this, flight speed is slightly compromised. It's not lethargic, but not as fast as the average Skywing, either.

- Has an extremely tough, sharp horn protruding between his eyes. This is where he stores most of his body's water reserves, used for attacks.

- Can sense other creatures in the mist thanks to his ability to perceive electrical sources and anomalies in electrical currents (e.g., other animals and creatures, including dragons).

- Because of his frivolous mentality, he easily brushes off insults, taunts, or any other form of verbal offense.

- While his hands are barely capable of holding weapons (albeit it's possible, just not comfortably), they are great for climbing.

- Concave formation at the root of the tail serves almost as a third wing, highly increasing flight stability. It may be agitated rapidly to whip up moderate windstorms.

- While in contact with humidity, Sabnohg's scales become charged with static electricity. This alters the way his scales refract light, allowing near-perfect camouflage by assimilating the environment's colors. Because of this, random chunks of Sabnohg's body appear to become translucent or disappear in fairly humid environments. Inside mist, complete camouflage is possible, albeit still imperfect. Camouflage cannot be voluntarily triggered.

- Mist Spew: While Sabnohg retains the Skywings' natural ability to breathe gusts of wind, his is less powerful and doesn't cause any harm to anyone in its path. Instead, his breath is extremely damp, effectively giving him the ability to use his breath to create mist. Mist covers an astoundingly large area (50 square meters initially, grows by two meters per post), but dissipates completely after six posts. It compromises long and mid-range vision, only being possible to see things that are extremely close up.
The excessive humidity also hampers smell, reducing or completely negating the effectiveness of smell-tracking.
The mist slightly impairs other creatures' capacity to breathe, making stamina recovery slower and easily making them feel exhausted after vigorous movements. Sabnohg himself and Seawings aren't affected.
Fire and burning Light attacks are weakened slightly, but help reduce the duration of the mist by one post per attack (throwing multiple fireballs or light blasts in one post counts as one attack).
Water, Earth, and Darkness attacks are unnaffected.
Wind attacks blow the mist away. Depending on the intensity of the attack, it may cause immediate dissipation.
Electrical attacks cause harm to anything inside the misty area, and severe additional damage to anything hit by the attack directly.
It takes an entire post to cover the area in mist, but it's possible to move normally while spewing.
After use, mist cannot be spewed again for three posts; that's how long it takes to refill the horn's water capacity.

- Poisonous/acid fluid: Sabnohg holds a special fluid inside a sac just before his tail. He may utilize this fluid for two purposes:

+ Spitting it out as a ball of acid. This acid is special, as it gets stronger depending on how clustered are the cellular conjunctions of whatever it touches. Because tougher materials have tighter and extremely rigid cellular conjunctions, the acid corrodes them very quickly and efficiently.
In short, the harder the material, the stronger the acid. Against bare skin, it causes fair irritation. However, it corrodes armor and tough scales with relative ease.
Only one ball of acid may be fired per post. They are easily avoidable if telegraphed, as they are preceded by the sound of gathering saliva.
Sabnohg may coat his tongue in this acid to add acidic properties to his tongue lash.

+ Vaporizing it to create poisonous mist. This mist lasts for only three posts, and covers ten square meters around its source without spreading. Its vision-impairing capabilities are slightly stronger than the regular mist's. Breathing becomes a tough task. Upon being inhaled, it digs into the body's inner nerves to cause extremely severe pain, to the point of being paralyzing. The pain suddenly halts after four posts. Sabnohg's coated nasal canals protect him from the mist's effects. While the poison is strong, it isn't lethal.
Because of the sheer amount of fluid it consumes, poison mist may only be used once every five posts.
This mist doesn't affect elemental attacks, nor triggers Sabnohg's camouflage by itself.


- Camouflage: While in contact with humidity, Sabnohg's scales become charged with static electricity. This alters the way his scales refract light, allowing near-perfect camouflage by assimilating the environment's colors. Because of this, random chunks of Sabnohg's body appear to become translucent or disappear in fairly humid environments.
Inside mist, complete camouflage is possible, albeit still imperfect. Camouflage cannot be voluntarily triggered.

- Has fairly weak bones, as they're hollow, akin to birds'. Only exceptions to this are his horn and tail, which are extremely solid.

- Abusing his breath and acid abilities may cause dehydration. This is especially dangerous in volcanic, desertic, or extremely cold environments, where the ambiance is extremely dry. In humid environments, such as near large bodies of water or rain forests, this is negligible.

- If Sabnohg's horn is broken, he cannot spew mist until it regenerates (6 posts).

- If Sabnohg receives a very strong blow near the root of his tail, his fluid will be forcefully ejected as acid. It takes five posts to refill his sac; until then, spitting acid and spewing poison mist isn't possible.

- Mist is counter-productive against electricity users.

Combat Style: Abuses the sheer advantage created by mist while gradually wearing down the opponent's defenses with acid. Once a weak spot is exposed, the paralyzing effect of the poisonous mist helps hold the victim in place. From here, Sabnohg decides how to treat Acheron's brand-new resident; whatever it is, he knows it's going to be a bad time.

Background
History: Not now. Not yet.
RP Sample:

...Who, again? I remember I told the others to pick up some of this region's beetle samples in the nearby woods and get their hard abdomens t'Hell over here. Heh, insect jokes. I bet they wouldn't get that one, though.
Hm... But the guests might arrive all itchy from the bee stings. Guess I forgot to tell 'em about those. Pretty dang aggressive, those local bee gangs. Well, looks like they weren't hivernating this time! Keh keh! I need to write that one down. "Hivernating". Man, really need to go easy on those Trackers once they come back with these insect jokes. If I'm not careful, their brains may implode from laughter! Eh, that one was an imp joke. But I guess it counts. Keheh!

With the "who-chases-what" done... Let's see. What are we missing?
Ah, that's right! They forgot to bring their lunch-bags! Heh, glad I didn't go around chasing bugs with that bunch of logheads. Might've been bad for my nutrition plan.
...But it's not like I can just let them starve forever, right? Ah, maggots. Guess I'll go look for those cricket-brains. For good measure. Freaking dimwits. 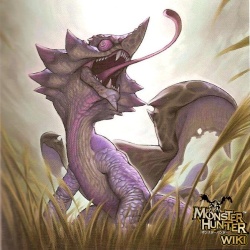