So, after a lot of thought, I've decided I'm actually sticking with 5 characters xD Because I love these characters, and I really, really want to RP them. So, here they are, and I want some plots for them. Plus, I'm curious if the people I used to RP them with are still around.

Asailia Dunno if she is still the leader, but I know Arkhor is still around. Are her sisters still around? Arika and Yang? Anyway, the official reason that she was gone is still something I'm working on, if anybody can help me with that xD

Neru lol, Neru. So, Neru has always been spastic, and nobody really ever knew or cared about her when I left, which was mostly her own harsh fault. So, she was off wandering. She is still small, but she did grow a few inches, and that's really the only change. The Void still has a hold over her consciousness, but is more that she's a chaotic neutral with a dash of chaotic evil now.

Wisp So, Wispeh I actually have something for. Au agreed on this, so she still has him ^.^ My reason behind her leaving is that she went to learn to heal, because, when she left, the tribe was small, had a new leader, and no Healer. She wanted to help in some way. So, she left. During that time, she taught herself healing, both through looking at Solstice's old things, and teaching herself. She learned to use her telepathy as a way to calm a patient down, by humming a tune in their mind, or even speaking softly to them that it would be okay. It seemed to work well, most of the time. As well as this, she took Au to her original home, wanting him to see it. It was an old den on the edge of the IceWing territory, and there, she found a document that mentioned her father being an NightWing. While it was something she was still unsure about, she took it as fact, as it explained her ability, and the slowly darkening of the tips of her scales. (she looks exactly the same, except all her spines darken to black at the tips.) She's also finally reached her full size mentioned in her character app.

Zephyros I KNOW NOTHING. I said he could come back as God, but I don't want to take that if somebody wants it, so I sorta need information. Also, is Rubytail still around? His trainee? Or, is Gala still around? If she is, are we continuing the topic we stopped at?

Adra How many of Arkhor's kids are left? *shrugs* Anyway, Adra is full grown now, and can both use her powers to Heal, and the more conventional ways to heal. She left on a journey to find a rare plant that can cure even the most deadly of diseases, and she now has that in a case in her den for any emergencies.

Yeah thats fine, also about Asailia I would say you don't need a reason, since not much has happened since you left. I'm just wondering how long its gona be before Adra ends up finding someone XD.
_______________________

Ruby poofed to go live with her mother her mother, so now we have Wargory, the crazy hallucinogenic Nightwing. Sorry. 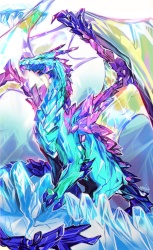 YES WE MAY CONTINUE TOPIC

Yeah thats fine, also about Asailia I would say you don't need a reason, since not much has happened since you left. I'm just wondering how long its gona be before Adra ends up finding someone XD.

Lol, no idea. She's all pretty and grown up now, though. So who knows

Echostorm wrote:Ruby poofed to go live with her mother her mother, so now we have Wargory, the crazy hallucinogenic Nightwing. Sorry.

OMG, I just had a thought...
What if Warglory was Wisp's half-sister? (I know its stupid, but I have not done much with War yet.)

Warglory is pure NW? How old is she?

YES WE MAY CONTINUE TOPIC

AND DINNOZO IS THE LAST SURVIVING KID OF ARKHOR UNLESS ADRA COMES BACK CUZ IF YOU DO, YAY
And Yang is here too. Which is me. Holla :3
(srry I'm in a rush :3)