Personal Info
Name: Vallinth Skyflyer
Alias: Vallinth ; Val ; Skyflyer ; Sky
Age: 34 years old
Gender: Male
Personality: Vallinth is known as an 'unsociable' dragon. This is mainly because he has trust issues, due a tragedy in the past, but you will learn of that later on. It is hard to gain his trust, and at the first meeting he is usually mysterious and dodges questions. He is quite mellow. He is quiet, and enjoys to be left in peace, even if he does have acquantinces or allies. He is cunning, and can sometimes be tricky and use flattery to get his way. He is somewhat greedy, and enjoys the presence of gold and treasures instead of one as a dragon.
Interests: Gold/treasures; Knowing more than he needs to; Being left alone; Books and scrolls
Dislikes: Talking and get-to-know-you stuff; Being tricked or fooled; Mice; Winter
Fears: Despite their small size, Vallinth is terrified of mice. He is also scared to get too close to someone to trust them.

General Appearance
Height: 37 ft. tall
Scales: Vallinth rather has feathers. He is mainly goldish-orange in color, and has sky-blue vine-like markings weaving around his upper torso and the base of his tail. Feathers on his wings have blue markings as well. His tail ends in a series of blue stripes, which leads to a sea-green color. The top of his head is plated with scales rather than feathers, and they are sea-green like his tail tip. The rest of his face is furred with a light shade of sky-blue. One long orange feather sprouts from underneath each of his wings, and are detailed with markings like the rest of his body. Underneath his tail-tip are 4 navy blue spikes that look like feathers, but you will learn more of these later on. Instead of horns atop his head, he has feathers that are the color of the spikes on his tail.
Eyes: Silvery-white with catlike pupils
Appearance: Picture above should suffice.

Skills and Abilities
Strengths: Being feathered and a SkyWing, Vallinth is a particularly talented airborne. Being sly, he is good at persuading others to get what he wants. He has fast reflexes in combat, and possesses a lot of speed.
Special Abilities: Vallinth has a sonic-boom breath attack. The two feathers underneath his wings can stiffen to become blades (and they can quiver as well when he is annoyed), which he can use in combat. He uses the spikes on his tail as a sword, and uses them more often than any other ability he has. He also hibernates in the winter.
Weaknesses: Vallinth's main weakness is the cold. It can freeze his feathers, which can prevent him from flying and slow him down, especially in reflexes. The cold also addles with his brain at times, and can make him hallucinate and become dizzy. This is why he hibernates in the winter.
Combat Style: As said before, Vallinth uses the spikes on his tail as a sword. He has fast reflexes. Other than that, he has no specific style of battle.

Background
History: Vallinth was raised by his mother. When he was Trainee-aged, a male dragon came along, and seeked to become Vallinth's mother's (whose name was Horatia) mate. Or, that is what Vallinth thought. You see, Horatia had many treasures, most that were those that Scholars looked for. Vallinth knew of the newcomer's (whose name was Rodri) plans, and was at first excited at the thought of having a father figure. But then Rodri killed Horatia, and Vallinth realized it was only because to get her sacred treasures. Rodri had formed a strong bond with Vallinth, so instead of killing him, he chased him off. And that is why Vallinth prevents himself from trusting anyone.
RP Sample: Alistair/Yang/Rylatha's alt. 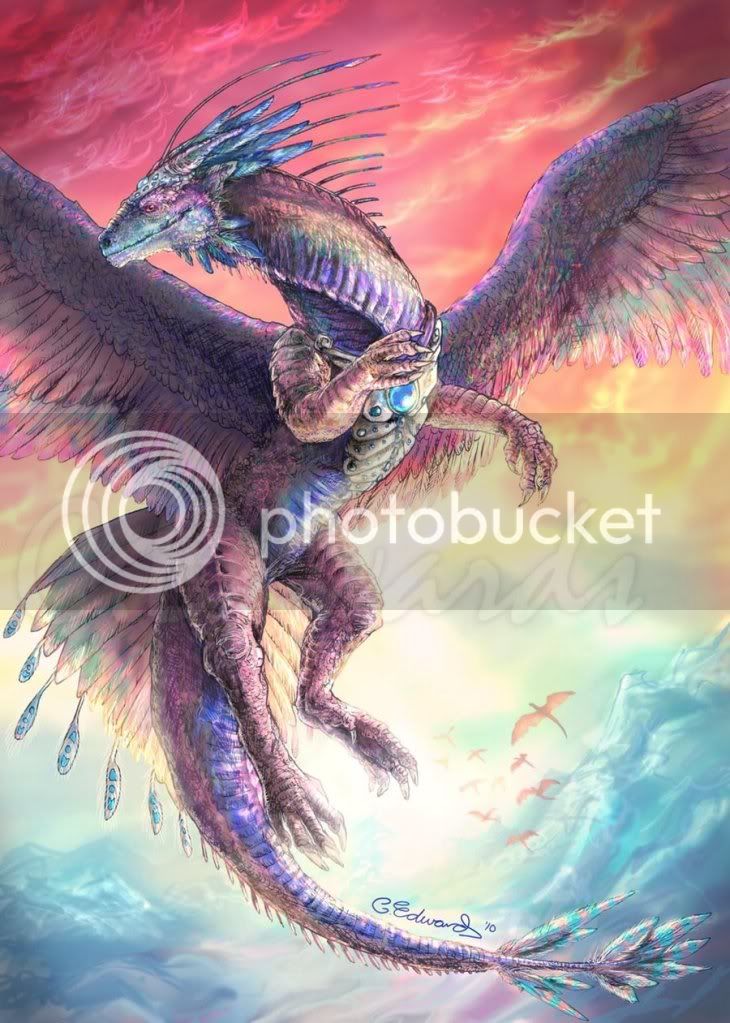 I like your thinking, gotta start somewhere. good initial impression from your picture. looking pretty cool. I hope to see you out there!