Top posting users this month
Who is online?
In total there are 13 users online :: 0 Registered, 0 Hidden and 13 Guests :: 1 Bot

A fortunate accident [Private with Kip]

A fortunate accident [Private with Kip]

((Kind of cliché, but couldn't think of anything else))

Hyruu let out a painful growl as he slowly headed toward the nearest healer's den. The day had started great, he hunted a bit for the tribe and then spent some time practicing flying tricks with Aakesh. The little four-winged dragon was definitively good at that, probably due to his Skywing heritage. That maybe was the reason Hyruu shouldn't have tried to follow him on that trick. He had missed a turn, and the next thing he could remember was hitting the ground. Hard. And more than once. He visibly hit it so hard he had bounced and rolled before sliding a good dozen of meters on the dirt. The grey dragon was quite miserable with his scales covered with dirt, dust and also blood. Because unfortunately, his right wing didn't take the hit that well. A visible gash could be seen at the base of the wing, and the wing itself was at an odd angle. Obviously broken. Hopefully the leathery part wasn't damaged, so the damage wouldn't be permanent. Didn't mean it wasn't extremely painful. At least, painful enough to eclipse the pain he could have felt from the many other bruises and cuts he gathered during the impressive accident. Another growl, and he clenched his jaw as hard as he could to try and ease the pain. He badly needed a healer to have all this taken care of.
Another few minutes of walking, and he finally saw the den he was looking for. He was a bit nervous at the idea to poke at the den of someone he didn't know. He had indeed never met this healer. Well even after a few months in the Lightwing territory there was a lot of dragons he hadn't met. But now wasn't the moment to be nervous. Even his usual shyness had disappeared as he stepped toward the entrance of the den. The pain was making it a necessity anyway.
"Erm, hello there ? Is anyone there ?" he called. He really hoped the healer was at her den and not performing some other duties elsewhere. He wouldn't bare the pain from walking with a broken wing much longer.
_______________________
Characters : Hyruu, Asher, Loque, Mei, Aakesh, Seyn, Rhune, Nara, Nisha

Hyruu had a small smile as Kip remained perfectly still, concentrated on the water below her. If this wasn't taking the fishing at heart, nothing was... The healer was a quick learner though.
A fish was already coming near the border, enjoying the warmth of the shallow water. Closer and closer from Kip... But Hyruu didn't give the signal yet. It was close, but would still have the time to react if she struck now, like it happened a few minutes ago. Seconds passed as the oblivious fish waddled, unaware of the threat. Closer, a bit closer...
"Now."
_______________________
Characters : Hyruu, Asher, Loque, Mei, Aakesh, Seyn, Rhune, Nara, Nisha

Kip kept her eyes on the fish as it moved closer. She briefly flashed a glance in Hyruu's direction, wondering if he had his eye on it as well. Her gaze swiftly flitted from him back to the steady water. As she waited for Hyruu's order, she wondered how she should strike. Was there, like, a certain way? Maybe Kip could strike like she did last time, and bring the fish out of the water. Wait, no. Kip freaked out last time. It could work, but Kip couldn't promise herself that she would keep herself from being creeped out by the slimy scales...

Kip had no more time to think, for Hyruu's words came to her ears:
"Now."

Kip didn't pause to consider how to strike, but rather than grabbing the fish with her paws, her head snapped towards the water, jaws open. She drew back, her face and snout completely soaked and tiny streams of water ran down her neck. In Kip's jaws was a fish, and Kip had to cross her teal eyes to look at her catch.
"Ehf dij ick..."
((Translation: I did it. :3)
_______________________ 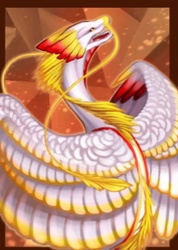 ((You'll excuse me for my recent short posts, lately I feel like my inspiration is just gone ><))

Hyruu watched as Kip struck, her head snapping toward the water. That was another way of doing it, even though generally dragons preferred not to wet their muzzles to catch their prey. But Kip did it, and emerged with a fish secured between her teeth. The grey dragon couldn't help but chuckle as the dragoness crossed her eyes to watch the fish she had caught. She looked pretty funny like that.
"Nice job ! You did it. Now we just have to kill it. You can wait for it to die, or you can break its spine. You just have to clench your teeth on it. I can do it if you don't feel comfortable with it, though." he offered.
_______________________
Characters : Hyruu, Asher, Loque, Mei, Aakesh, Seyn, Rhune, Nara, Nisha

((Don't worry about it :3 I have creativity blocks, too.)

Kip nodded slowly, feeling slightly guilty. She dropped her catch, and it flopped on the stones pitifully, gills flashing red as the fish gasped for air. Kip closed her eyes. She felt weird, inflicting pain on another being, even it was a tiny fish. Healing and mending was all she was taught to do. No longer, though.

She swiped her paw, knocking the fish over to Hyruu. Her ears burned so hot in embarrassment that she thought they may sizzle into ash. Honestly, she had to prevent herself for being so sympathetic about things she had to do. "S- Sorry," the Healer stammered. "I'm kinda not used to killing things, and the scales feel weird when they move underneath my paws..."
_______________________

Hyruu watched as Kip seemed to struggle with her feelings before knocking the fish toward him. The grey dragon caught the fish under his paw, grabbing the rock under it with his claws to secure the catch. He gave the healer a warm reassuring smile.
"No worries. Not everyone enjoys killing preys... and not everyone likes fish either. You're not the first one I see that feels weird by holding fishes, you know. Heck I even know a few that are scared by eels. Well I can understand them though, eels are gross. I mean, they're as slithery as snakes with the same slimy scales as fishes." the young dragon smirked.
The fish beneath Hyruu's paws stopped squirming as it finally suffocated. The dragon removed his paw, letting the fish rest on the rock it was on.
"There. I guess you won't mind if I prepare it ?" he asked.
Considering how she had been reacting to holding it, he wasn't really expecting a positive answer from her, so he began making the preparation. Hyruu swapped the fish on the rock, exposing its belly. With an expert claw, the grey dragon made a cut on the belly and removed the fish's guts. After doing so, he made two other cuts to remove the head and the tail, leaving only the edible part of the body. Once he was done, he started cutting the fish in small pieces that he disposed on a flat rock he could reach. In a matter of minutes, the fish was ready.
"And here you go ! Well it's a bit simple, had I been able to walk freely I would have gathered a few berries to accompany that. And some raspberries for the dessert." he apologized.
_______________________
Characters : Hyruu, Asher, Loque, Mei, Aakesh, Seyn, Rhune, Nara, Nisha