A Day of Training [Zephyros and Rubytail]

A Day of Training [Zephyros and Rubytail]

Zephyros had awoken with the morning light, as he did most days. Stretching, he'd flown down to the small lake on his island, landing and drinking his fill before sitting down to wait, idly shooing away clouds. The weather was sunny, if a bit windy, but that was good. After all, a little wind never hurt a SkyWing. He'd planned to train Rubytail today, considering that she was training to be a Guardian, and Haneul was usually busy. As well as that, he'd been training her since before Haneul had joined the ranks of the Guardians. Another year or so, and Rubytail would be an official Guardian right there with him. Yawning, Zephyros leaned back on his tail. He had rounds to do, and she was coming. He just hoped she'd be here on time, so he wasn't late on starting.
_______________________

Zephyros's hopes were, of course dashed. Ruby got up late, ate her meal slowly, and been distracted by a herd of dinosaurs, which she had watched for a good long time on her way there. She had also forgotten about the lesson until she spotted an interesting looking cloud, which reminded her of Zephyros, which reminded her of where she was supposed to be. She scurried over to the meeting place and... crashed straight into her mentor. "Err... sorry!" she yelped. She was worried if he would punish her for being late and all sorts of strange, gruesome ways he could punish her. But mostly, she was afraid he would take her somewhere up high. 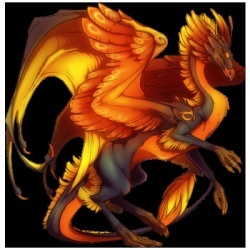 Of all the ways he'd expected Ruby to arrive, he certainly hadn't considered her crashing into his side. Most dragons thought to stop before ramming into things, after all. At least, that was his belief up until that moment, when a bundle crashed into his left flank, causing him to flop over on his side in a tangle of wings and a tail. "Rubytail!" he grunted, looking at the trainee on top of him. With a grunt, he shoved her off onto the ground, standing and shaking some of the dust off of himself. "Be careful where you fly," he said, his voice thick with amusement. "You could hurt somebody." At that point, he smiled, a thought forming in his head. "In fact! Why don't we go practice flying? Shardas knows you need it."
_______________________

((Too lazy to switch accounts.))

Ruby turned a pale shade of red. "F-f-fly? Like, high up?" Just thinking about it terrified her. The land below her, spread out far into the distance, no floor beneath her feet? What if she got hurt? What if she DIED? She shivered, endless scenes of Ruby falling and dying played through her head. "Erm... could we umm... not fly really err... high up? I umm... errrr..." she trailed off, desperately trying to hide her terrible fear. She shivered. She much preferred walking or running. It wasn't that she didn't like flying, she just didn't like HEIGHTS. Maybe Zephyros knew her secret fear and was punishing her for arriving late.
_______________________
My other characters
Barracuda Jadespine Rubytail Scourge Eveningsong 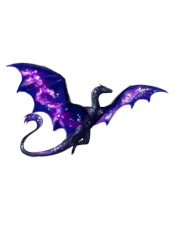 Zephyros raised an eyebrow ridge from the moment Ruby went pale, a slight look of confusion on his face. What was she so worried about? She flew every day, just like every other dragon. She couldn't have gotten to his island without flying, after all. The look of confusion dissipated, replacing itself with a stern visage. "No," he said. "If you don't learn to fight flying, you're useless as a Guardian. Every tribe boasts dragons bigger than us. Without the ability to fly, you'd be crushed in second. Now come along, Rubytail." Opening his wings, Zephyros took to the sky, stopping a little bit above and looking down, waiting for the trainee to follow.
_______________________

Ruby went even paler. Useless? She didn't think she would be useless if she didn't fly up as high as Zephyros was currently. Refusing to be what could be considered by some useless, she jumped into the air and flew. She was, surprisingly, not afraid, until she looked down and saw the land spread out below them. She went from pale pink to dark green and almost had a heart attack. As it was her wings missed a beat and sudden nausea filled her stomach. She staggered clumsily in the air and tried as hard as possible to stare at the clouds. And not think about plummeting to her death.
_______________________
My other character is Crystal
[21:36:22] * Eveningsong backs up with hands in air innocently

Pausing in the sky, Zephyros watched Rubytail curiously as she took off. The trainee was obviously nervous, even a bit sick to her stomach, but he was unsure why a SkyWing would be nervous about flying. That would be like a SeaWing that was scared of water. Which, admittedly, as far as he knew, didn't exist. "Come on, up here," he called down to her. "Away from the island a bit, I don't want either of us crash landing onto my den or something."
_______________________
Asailia's Information
Alts: Adra, Neru, Wisp, and Zephyros
My DragCave Stuff:

"S-s-sure." She said. She flew even higher, and the sickening nausea increased. Then flapped away from the island, almost loosing her lunch when she saw the land once more. When she reached Zephyros, she stopped looking ahead and started staring at the clouds. She started thinking about them too, until she thought about how high they were and yet how close. Which lead her mind over to how high she was. She faltered in midair and dropped like a stone, only able to regain control just in time and fly back to Zephyros. He was huge. And grumpy. And not necessarily happy with her right now. This was worrying. Huge dragons were normally mean. She wondered if he would attack and hurt her. Probably, he would knock her out of the sky. She shivered as images of her dying filled her mind.
_______________________
My other characters Jadespine Elkas
[20:18:15] * Rubytail gives Asailia a window and a mouse pad
[20:18:35] * Rubytail "make a robot out of these things!"
[20:06:53] Rubytail : BOW TO THE MUFFINS!
[20:33:16] * Rubytail gives Au a bubble gun and a party hat
[20:33:39] Rubytail : Take these, for they shall help you on your journey
[22:12:22] Warglory : I'm a toaster, you can't slap me!