Image Pending
Personal Info
Name: Myyra
Alias: Sightless Speedster, Sightless (insulting)
Age: 24
Gender: Female
Personality: Myyra is easily one of the most outgoing dragons you will ever meet. She is very curious, and will often step over a dragon's personal boundaries by total accident. She is innocent and inquisitive, much like a hatchling, and everything is always brand new to her. She retains a keen interest in any topic, no matter how dull. As a result, she is one of the most learned dragons out there, though she doesn't flaunt this knowledge much. She is a good friend and-in addition to being a good talker-is also a great listener with an even better memory. She is a good shoulder to cry on if you need it, as she is the last person to ever judge you.
Interests: asking questions, getting answers, meeting dragons
Dislikes: Fire, water, the ground
Fears: She has pyrophobia, or the fear of fire. This is because she can never tell exactly where it is, and it screws with her sonar. Same goes for water.

General Appearance
Height: 15 feet tall, 30 feet long, 60 foot wingspan
Scales: Primarily bright yellow, with a sunset orange underbelly
Eyes: White pupil, blue iris
Appearance: Myyra is completely and totally blind.  She cannot see a thing, and was born this way. She is on the smaller side of average for a Skywing, but her wingspan and personality more than make up for it. She is brilliant yellow with a plated underbelly that is sunset orange. She has two pale yellow horns that stick out straight from the back of her head, and massive visible and mobile ears sprouting from just underneath the base, often giving her a very puzzled or shocked expression. Her wings are massive, the membrane stretching up to partway up her neck, to partway down her tail. This offers and immense wingspan as well as area for lift. She has a wyvern build, and-on the ground-tends to walk like a bat. She was born with another defect-along with being born blind-where each wing has an extra-shorter-finger on the end. This does not hinder her in any way, and actually makes her much more agile and fast in flight. Her tail is long and thin for agility, and tipped with a heavy orange diamond shape.

Tribe Information and Status
Tribe: SkyWing
Rank: Tracker
Family: She doesn't know what they look like, and she's been told she was an only child, and her parents passed away before she left.
Mate: Haneul
Hatchlings: N/A

Skills and Abilities
Strengths: Myyra is arguably the fastest dragon, capable of creating a sonic boom while in flight. she is also rather sneaky when she wants to be, and quite knowledgeable and can think through problems quickly, often taking an abstract route.
Special Abilities: Being blind and with massive ears gives her the ability to use echolocation, giving her a surprisingly detailed map of what's ahead of her. She can also use this power to deafen an opponent-permanently or temporarily-using a sonic boom she creates with flight, or just screeching loudly with her echolocation. She can produce a much quieter noise, that is still devastating, meaning it is a strong enough soundwave to do a small amount of damage, but it mostly used for a distraction, or to keep a dragon busy, as it gets very annoying very fast, and can even go so far as to physically hurt them if they are exposed long enough.
Weaknesses: She is not strong at all, and will never be good at a close-range fight because she cannot see. She rarely creates Sonic Booms or deafens an opponent because it is incredibly painful for her as well, considering the fact that her ears are so large and sensitive. She is often confused by lengths people tell her, or any descriptions, and can be hindered by this. Loud noises are painful to her, and can scramble the sonar she is almost constantly using, making a sudden object in her fiend of vision, or just making it blurry.
Combat Style: Long range. She will never attempt to get close enough to an opponent to use her claws or teeth.

Background
History: Myyra hails from a kingdom quite far away, where wyverns are the norm, not a normal dragon. She was born an only child to a well-respected family in the kingdom, her father being the general, her mother being a tracker. Or at least she's been told.
It is customary for-when a wyvern reaches a certain age-they go on a journey, a rite of passage, if you will, and Myyra did just that.
Except, she isn't planning on going back anytime soon.
RP Sample: This is Shine. 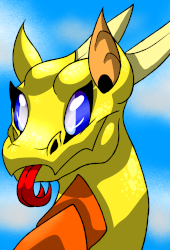 This is an really interesting concept, quite unique and original. Brilliant Shine I think it'll be quite interesting to see where the character goes. I'd approve this myself, yet given my new role I'm just going to participate in feedback and see what the other staff have to say.
_______________________
Tenebris's Bio
A look at one of Tenebris's Publications as a Scholar

It is kind of ironic she is able to create sonic booms in flight but uses echo location to "see". You do realize she won't be able to receive feedback of her echo-location at that speed right ? Quite interesting to have a dragon whose perception will decrease with its speed.
We need her to meet Aakesh though ! Two born flyers can be great ^^
_______________________
Characters : Hyruu, Asher, Loque, Mei, Aakesh, Seyn, Rhune, Nara, Nisha