Dislikes: Big dragons (a.k.a EarthWings, even though he has never met one..) His size. His colour

Height: 4ft, later 23ft
Scales: Sirius has small dagger shaped scales. They are very soft, aerodynamic and pure white in colour.
Eyes: Red
Appearance: Sirius is like any other Night Fury, except he is white. He has a small head, a long tail with two clearly defined tail flaps, quite broad wings for his age. He also has a few horns protruding from his back.

Family: To be Decided.

Strengths: Being quiet, jumping, a very good aim with his paws. He never misses.

Special Abilities: None that have been shown. 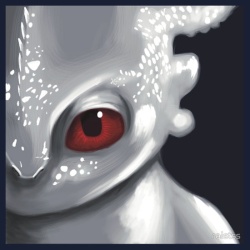 Yeah. I do. There aren't many topics where I can properly roleplay him in though.