Baldirak did what he loved most -- flying. Well, he loved being a Guardian, too. But here in the neutral territory, he wasn't one. He didn't carry his title of Sapiens Draco. He wasn't even an EarthWing. Here, he was simply Baldirak. There was a warm current, a pleasant one that rarely happens. It was like the first rays of sunlight on a spring morning; hot enough to melt away the cold of the night, but gentle enough to feel like a mother cuddling her Hatchling. Down below, a breeze every bit as inviting as the air currents moved the grass in a way that resembled waves. A smile lit the face of the old dragon as his shadow cloaked the world beneath him in brief darkness, reminding him of the days when he'd been called Shadow. His lungs filled to their limit as he inhaled deeply the smell of... peace. There was nothing on the wind that shouldn't be there. Just a beautiful day.

He spent the better part of the morning visiting all the neutral territories, seeing how they compared and differed to each other. But he always found himself coming back to this one area, with the rolling grass and clear, cloudless sky. If anything could really be called perfect, it was this spot... A low, contemplative growl left Baldirak's throat. This day was too good to be spent alone. Diving down, he landed near a pond and lapped up the cool water. He then looked around, trying to calculate the distance between where he stood, and a group of trees off to the east. His tail sank lazily into the water, and when he became aware -- he'd forgotten that he was standing by the pond -- of it, he got an idea. Smiling to himself, Baldirak let out a roar that would be heard by all dragons for half a mile or so, calling them to this spot.

ElextroPhoenix woke up quite suddenly to the sound of an echoing roar. It nearly made her fall off her little sky island! Whoever made that screeching noise sureyl didn't care for others.

Following the sound, she found a large EarthWing screeching horrendously. Afraid to go up close by herself, she watched from a nearby tree branch to see what his plans were.
_______________________
Owned Dragons:
NightStrike
http://www.rpgdragons.org/t2036-nightstrike 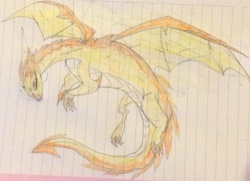 NightStrike flew down from her little cloud island and swooped down into the clearing Baldirak was in. From the shadows, she could see the EarthWing calling others. For what, to fight? To race? No other Dragons or Dragonesses had arrived, as long as she could see, anyway. The Earthwing noticed her presence.
_______________________
Owned Dragons: 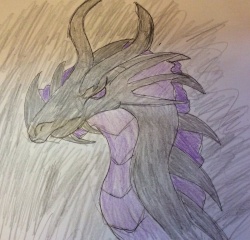 Tenebris glided through the air majestically, there was no effort involved as he allowed the smooth air to carry him onward. Another expedition of his out of the NightWing sovereign Kingdom, surprisingly he was alone although the general administration of Shadow's refuge and his role within the Council had its tedious moments, his life as a Scholar no longer an occupation but a passion to provide the necessary escape from the political manoeuvring, power, corruption and conspiracies of his peers at the Royal Court.
The roar which echoed around him caught him somewhat by surprise, his muscles tensed slightly as his eyes narrowed half expecting an ambush to catch him off guard. After righting himself with a disdainful scoff of scorn to himself the realisation that the roar came below, tilting his wings he began to circle in a spiral to lower himself, those below no doubt seeing the large dark shape descending.
Landing elegantly, his posture was ever domineering and regal as his neck then craned out, his cold eerie sapphire eyes glaring at Baldirak, thus far he had ignored the NightWing. His maw opened as his well cultured charismatic voice rang forth "Now, now then, isn't this certainly interesting, perhaps you can indulge me as to what this "summons" is all about, it doesn't seem to be out of calling for aid or that of a challenge..."
_______________________
Tenebris's Bio
A look at one of Tenebris's Publications as a Scholar

As he waited to see if any would answer his call, Baldirak continued to look around the area. He'd gotten the idea to hold a race; he wasn't sure yet if it would be just one, or a series of them, but he'd think of something. He also walked and flew the area to find different land markers that could serve as checkpoints. To the west of the group of trees, there was a river and to the west of that, a boulder. It was a curious rock that stood about 3ft tall, about as wide as a pine tree trunk, and was the shape of... Well, it was hard to say. From the ground, it looked a bit like a Dragon's tooth. But from the air, it resembled a whale's tail. Perhaps somehow it could change its shape... 'Or perhaps you're getting older.' Baldirak thought to himself. Whatever it was, Baldirak decided this would be a checkpoint. He landed beside it used his claw to carve an 'I' onto it. Then he went on to the east and found a twisted tree, which he marked with a 'S'. To the north, the ground near the top of a hill was marked with a 'F'. From there, still north, a long but certainly challenging path through a canyon brought him to the top of a waterfall. He looked over it to discover a large oak tree at the edge of the pond that the waterfall fed. As he didn't wish to damage such a beautiful tree, he marked the ground in front of it with an 'E'.

Baldirak returned to his starting point in time to see the NightWing land there. He landed himself with an earth-shaking thud and dipped his head in greeting as he walked over to her. "Hello, NightStrike." His pale gaze lifted when he heard the disturbance of air from wings and saw the ground darken with shadows, to see Tenebris. He called up to him, "I shall indeed indulge thee! I had a thought. This is a beautiful day, why not spend it in fun and take a break from the usual hectic schedules of our days? So, I'd like to host a race."

Elex cam out of the tree herself and flew down onto a small bush next to the starting line. "If you don't mine, Dirak, I would like to join. She twirled her lightning bolts a bit and then, before Baldirak could reply, she scouted the area. She found the checkpoints Baldi had set and then returned to the starting point, waiting for is reply.
_______________________
Owned Dragons:
NightStrike
http://www.rpgdragons.org/t2036-nightstrike

He looked to the SkyWing and smiled, nodding. "That's great." Walking a few feet away, in front of the pond, he used his acid to create a starting line. He covered the line over by raising the earth beneath it. He then walked back to the NightStrike and Elextro. "I marked the course, as you saw Elex. Now, I just need to determine how the race will go, and I think I have an idea."

Inclined his head as Tenebris rose an eye ridge at Baldirak. He contemplated the idea of a Race, clearly he wouldn't participate himself, but he certainly found the concept interesting. Striding over to where Baldirak made the starting line he stood several feet away, watching intently before lowering himself to a sitting position, his tail coiling around his back talons as he rose his front right talons to his head, running his claws over one of the silver rings what adorn his horn "So then, if you would, this race of yours, just how will it operate?", his tone was ever elegant and majestic in a charming regal fashion.
_______________________
Tenebris's Bio
A look at one of Tenebris's Publications as a Scholar

His pale eyes moved to Tenebris again and he walked over to him, dipping his head in greeting and respect before speaking. "Why so far away, do you think I will bite?" he chuckled as he sat himself, mirroring Tenebris. After a moment, he spoke again, You see, after first I thought, provided how many participate, we might go all at once. But as I mapped out the route, I found that that would be... difficult, to say the least. So, I think it shall go something like this: Instead of one long race, there will be a series of races, all following the same route. But they will end at different points. And each race will consist of two participants..." Baldirak paused for a moment, in part because he was still mapping out this idea in his head, and partly to allow his words to sink in. "Now, the length of each race will be determined solely by the racers. That is, if they want to run the whole course, they can. Or if they only want to run half... well, you get the idea. And I think... yes, there will be two teams. The winning team, of course, will be determined by the most races won." Baldirak stood then and walked back to the pond. "To be certain all is fair, we will need a judge, should there be any disputes. I marked four landmarks along the course to act as checkpoints, and at each shall sit a spectator, who will be able to watch the racers and report to the judge any evidence of cheating."