Personal Info
Name: Aaros
Alias: Enforcer Of Discipline
Age: 29
Gender: Male
Personality: Aaros is a very intimidating guy. He seems emotionless and cold, and sometimes, distant. And he isn't a expressive person. But he just chooses not to be. He never tries to have opinions on things and to do every job perfectly, without fail. He is stern and strict, and never allows exceptions. He aims for perfection and nothing less. He tries to be the chains the holds everyone together. To be someone everyone can rely on and trust. He tries to be a responsible dragon and grieves if he does anything less. He never tries to be a burden to anyone and everyone and looks after everyone.

Aaros is a workaholic. He puts his work before himself and always gives it his best. He can be very protective and could be very worried. He could be reckless for the things he wanted most, and is more of a tactician than a warrior. Although seeming emotionless and not very expressive, he tries to develop a solid persona to act like that. He is sensitive though, but tries to change his pathetic self to a more strong, willful one. He is proud, and confident. He is confident in every decision he makes. He has to be, because he can't change what has been done. He refuses to dwell in the past and to regret his own mistakes. He can run from them or learn from them. But his trauma tainted his innocent way of thinking and turned into a male of logic. Never believing in unrealistic dreams and fantasies. But in his own way, even if it is unrealistic, he always tries to be supportive of someone's ambitions. He thinks that desiring something over the top is not bad, it can make someone a hard worker.

"F-e-a-r has two meanings. Forget everything and run, or face everything and rise." Is what Aaros lives by. He'd rather learn from his mistakes and worst fears than run from it. He refused to run from something he could overcome. He is a very inspirational person, and acts more like a war general than a high guard. Always making plans and strategies ahead of time, and making good ones in an instant. A True Tactician. Aaros is straightforward and blunt. And can be seen as insensitive. Though he is strict, and stern, he is generous and considerate. A hard worker, and mature. Though he isn't very romantic but knows how to properly please someone. With cliche gifts, of course!
Interests:

General Appearance
Height: 23 Feet
Scales: Orange, Black, and Gold Scales with feathery wings with a leathery ending. (Picture above)
Eyes: Golden Eyes With Dark Orange Iris.
Appearance: Aaros has a feathery, sharp mane and cheek with scaly/leathery, webbed features to his jaw, neck, and tail. He has a black underside and talons. He has golden scale plates placed on his thighs, feet, and knees. In addition, he also has cracks of orange lined golden cracks in his scales. 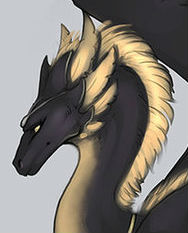 Re: Aaros, The High Guard.