A clammer of the earth, as trees feel upon the ground, Mnerolth was walking outside the hidden kingdom of the Earthwings. As his enormous tail swung behind him, toppling a few trees along with it smashing a large rock face. He just walked as he usually did, not looking about as his rainbow eyes glimmered, his wings folded as usual, along with his heavily plated scale armor like body. Having a earthy grey colour to it, his form was meant for combat, yet he cared not for it, as he stopped dead in his tracks and saw a large human village in the distance, as he tried to go around a group of mages came forth, yelling strange words that he knew not of. ~Humans, of all creatures, why did I have to come across them here. And so close to the kingdom as well.~

He though to himself, as suddenly fire came forth and struck him, these humans where foolish enough to attack him, as he glared at them, more fireballs came flying at him, and with his tail. He swatted them away, he sighed and opened his maws, closing the scales along his eyes and nostrils, and suddenly, a cloud of white power spewed from his jaws and flew at the human mages. Screams filled the air, as they burned in the cloud of white death, and the area around him also burned, but not from fire, but a chemical burning, as they area now destroyed. Mnerolth sighed and a tear fell from his eyes, ~Now they made me destroy more of this place, at least the cloud didn't spread too much, teach these humans to threaten me. Lets just hope they get away from the Kingdom, would hate to kill something I have no time for.~ He thought again as he strolled around the area, the human village now deserted, as he saw them all scurry away to the North. He sighed and sat in the sun, taking in the warmth, and hoped he didn't have to release his White Phosphorus cloud of death again. 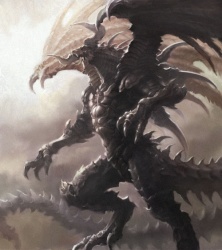 Mnerolth
God of Nature and Earth

Cosmos was hovering over his hidden kingdom peacefully in hopes of returning to the great hall for some studying on modern, most updated scrolls. Despite no one ever really going into the great hall except for events and conflicts, the library of scrolls, books, and artifacts often needed some organization. But those thoughts were cleanly washed away from his goals once he saw and smelled smoke. Danger? It was close to the kingdom and surely not every EarthWing would want a forest fire. With that in mind, Cosmos flapped his wings with a rhythmic beat as he did stationary hovering so he could turn toward the smoke.

Cosmos then zoomed over toward the smoke and speed but he wasn't necessarily concerned. It was only a few seconds before he arrived just right above the burning village filled with cowering humans and those her were defending against.. Mnerolth? The brute he scouted to be a first-classed adviser. He didn't think he'd be out destroying villages and killing helpless humans. Or at least the majority seemed to be that way. After doing his observations and inspections, he swiftly hovered down to the ground and dropped to the crust with a thud, causing the ground to rumble a little. Just enough to make the humans trip and stumble. Cosmos then raised a brow at Mnerolth, who seemed to think he was handling this quite well. Human villages were being destroyed everyday but he hasn't come across so many in decades.

Cosmos smiled at the cowering and trembling humans warmly before looking back at Mnerolth, "Leave these poor things be. They haven't done anything to threaten my Kingdom nor our tribe from what I can see. All you're doing is making enemies as if now. And the last thing we need is that."
_______________________

Mnerolth looked at Cosmos, his leader and spoke, "I am only defending myself, as I was going to leave them be, and report a human village to you sir, until Fire Mages attacked me." "I am merely defending myself, if my breathe attack catches in the wind then that is there vault for provoking me to use it." He said as he turned away from the village, flapping his wings and making the chemical smoke disappear and making all as it was once. As he walks past Cosmos, "I rarely ever fight, but Fire mages hunted me down when I was a kit, they killed my parents, and now they tried to do me harm, I was merely enjoying a nice walk."

"You should know by now, the name these humans gave me, "Titan of White Death", they were foolish enough to attack me, knowing the power I have, all i wanted was to leave them be, yet they attacked me for no apparent reason, if anyone is at vault here, is them, but mine as well, as my breathe is quite potent." "And if you don't believe me, think about this, have I once attacked humans on sight, nay, I ignore them as much as possible and I try to avoid conflict as much as possible." Mnerolth said as his rainbow coloured eyes gleamed with sadness, as a few tears where flowing from his eyes, hating that he had to kill to defend himself, and use his horrific breathe attack.
_______________________
Title: The God of Nature and Earth
Grand being, looking towards the heavens, what do you see? With your eyes of colours, so brilliant in shades, what do you see? Is it heaven, is it god, or is it to spread the White cloud you spew, upon the humans.

Power(s)
Stone to Life: Earth comes to life, through life essence, 6 feet tall, and 1000 lbs., limited 5 per day (Topic), can be used in parts or at once.
Weakness: Blood lost, useless unless he touches the stone, and releases his essence into it. Key Factors: breathe or his blood.

Gaia's Kiss:Cures all but the deathly of ailments, limited 3 per day (Topic), can be used on several targets or one continuous.
Weakness: Blood lost, useless against old age, near death causes like: curses, hexes, or natural causes. Works on: broken bones, torn flesh, burned skin, poisons, and illnesses.

Mnerolth
God of Nature and Earth