Top posting users this month
Who is online?
In total there are 11 users online :: 2 Registered, 0 Hidden and 9 Guests :: 1 Bot

Dragon under the Tree

Dragon under the Tree

Grumbles rattled through the forest. Their source was a gigantic, autumn coloured dragon, blending perfectly with the pile of dead leaves he'd concealed himself in. only detectable by the leaves floating over his nose from his breath, and the huge bellows of his snores. Otherwise, invisible. To a deaf man. Above him, was The Tree. A huge tree, which was made up of different types of trees stood proud, watching other the forest. Pine, Oak, Beech, Hazel, Ash, they were all in there. Birds lived there, and, he (for most of the time) lived there. He awoke. Yellow eyes snapped open.

His tail whipped and snapped, making their sounds bounce off of the trunks around him, his wings beat, sending his leafy bed up into the air. Finally, he roared, exhaling a deep bellow of drowsiness, which rattled the ground itself. He stood just below the tree-tops, at 139 feet high. The Tree beside him, however, towers above the canopy of the Lush Forest, standing at 180 feet high. Wrapping his whole body around it, he holds onto it, with his head facing down, awaiting for something tasty.

Perfect.. he grinned, as a few, well, he didn't know what they were walked past. Slowly, he released his grip from his tree, and slid after them. Now he could recognize them. Unicorns. There were five. Due to his size, Terra would have had to get them all. He simply struck, and blocked their path, and struck them with a heavy hand. They all went down the hatch, which surprisingly left him full and satisfied. He went back to The Tree, and sat upon the hefty and strong canopy, as his meal went down.
_______________________
Terra in Autumn and Winter 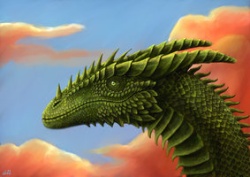 Re: Dragon under the Tree

Their gleaming white hides sparkled in the lush undergrowth. Sharp horns stood atop proud foreheads, each curled bone filed down to a fine point. It wasn't a guarantee, but males tended to have the sharper horns so that they could defend their harem. But there were at least five beasts here, which meant that either these were a band of brothers or bachelors, or that at least three of these hoofed creatures were females.

A mouth of fangs frowned. Silver eyes narrowed. Rogue was not a unicorn expert. Nor did she care to be.

Each steady, silent step forward brought her closer to her prey. She was careful to keep a safe distance until she finally decided to act given her grumbling stomach. She couldn't recall the last time she'd eaten, but the way her belly snarled at her told her that it had probably been a while.

Her ears were perked forward, swiveling wildly every few seconds, scanning for any possible danger. A silent growl slipped past her lips and she had to swallow to keep herself from drooling. Each unicorn had a sweet, tangy aroma that kept curling around her nostrils, teasing her with every tug of a breeze.

At her size, she wouldn't need all these creatures to keep her satisfied. Most times, she only took a single animal or two, at the most. Of course, if all she could manage to snag was squirrel, she wasn't going to hesitate taking as many as she could, but if it were unicorn like these, she was careful to preserve her prey. Better to pick them off one at a time, one a day. This way she had food for days to come and she would not grow hungry. That didn't mean that she didn't have the urge to spill the blood of each and every one, savoring the warmth of blood on her claws. Rogue again snarled at herself, careful to keep it silent. She couldn't give in to the wills of instinct. Not when there was no reason to.

She prowled forward, her drooling mouth the sign that her time had come. With all the grace of a big cat, she jumped with her wings spread wide, the impressive span turning her small leap until a smooth glide up the nearest tree and into a branch above. She quickly jumped from limb to limb, each one refusing to bend at her light touch. Her eyes narrowed on the one in the back, farthest to the right. It was the largest one, very round in it's belly. If Rogue had to guess, she'd say it was pregnant, but she had no real answers. Only guesses.

She crouched above the small herd, muscles tensing and winding up until she felt the wind shift. The small breeze pushed her tree limb up as she kept her wings spread wide, giving her the feeling that she was floating. She grinned to herself and leaped off her perch, swooping down just as one of the unicorn perked it's ears. Too late, stupid creature. . .

A massive, scaley hand slammed down into the ground and swung at her prey, sweeping every one of the creatures into it's copper-covered maw. She watched in shock as the large dragon swallowed happily, only to remember at the last second that she was heading for him still. She veered sharply, slamming her wing into a tree and rolling in the leafy loam. She felt her skin burn hot and turn white against her will. The young dragon struggled to her feet and felt her stomach growl unhappily and she felt green with envy, jealous of the gluttonous dragon not more than thirty feet away. She glared at him, stepping forward once, spreading her wings, only to wince hard and bit back a yell. She felt her hide glow again and she didn't hesitate to close her wings back up, careful to handle her injured one as gingerly as possible.

Rogue looked back the dragon now in a tree, looked at the small rivulet of blood sliding down it's chin, felt the rumble in her belly, and the frustration rose, tightening in her chest. She swung around, her tail whipping viciously into the nearest tree, her sharp tip embedding itself into the brittle bark. She called out, aggravated, and shook her head.

Ears pinned back against her head, she stared at the dragon. "I hope you enjoyed that," she spat out, her fins starting to push out from her spine, the black tips glistening. She didn't know what she was doing. She didn't know if she expected to fight, but she was so frustrated, she had to vent it somehow. It was this dragon's own fault that it was there in her verbal range.

Re: Dragon under the Tree