Image Pending
Personal Info
Name: Vale
Alias: Val, Soot
Age: 25
Gender: Female
Personality: Vale is incredible rough 'n' tumble, doesn't give two...anything about getting dirty, and is THE most sarcastic dragon you will ever meet. She does care for others, though it's often very difficult to see through her sarcastic attitude. She has a great interest in heat, but not the sun, fire. As a result, she is very buddy-buddy with the Firewings, or at least really likes them. Well, the fire they produce, not so much the dragons themselves. She also has a passion for animals, and-oddly enough-the dark. She rather likes the dark, as she can see the coals and embers of her fire more easily, and it's easier for her to do her work. She does prefer to be left alone and work independently, but she is more than capable of socializing. As well as being a master with metals, she can easily learn how to use many types of weapons, and already knows plenty, on account of creating them, and needing to know how to use them in order to make them well. She is also headstrong. Very headstrong.
Interests: Fire, Jokes, metals, heat, being alone
Dislikes: Cold, bad jokes, water
Fears: Not quite a fear, but-due to its properties and the way it interacts with her forge-she hates water and stays away from large bodies of it whenever she can.
General Appearance
Height: 85
Scales: Primarily pale blue, but appear grey
Eyes: Yellow
Appearance: Being a Lightwing, her color is constantly changing, but she is mostly a pale blue, though it's rarely ever visible due to her constantly working in an underground forge, the soot and ash covers her scales so they appear a grey, with slight tinges of blue. She is very powerful for a female, particularly her forelegs, chest, wings, and tail, though she is overall very muscular from working in the forge. Her wings are large, though can be easily folded tight against her body while working. She has two large spines stemming from the top of her head, and thin ones down her neck, stopping at her shoulders, and resuming behind her large wings. Her forefeet are very hand-like, offering ease of use while working, though they lack a true thumb. She can use many types of weapons, though they all remain in her forge. She has small, red salamander-like creatures that are very heat-resistant, and about three feet long. She calls them fire salamanders, and she has a lot that live in her forge, due to the small pool of water in the back she uses to cool metals, and the heat provided by the forge. One particular one she keeps with her at almost all times is very intelligent for its kind, and has distinctive blue markings on its feet. She calls him Blaze.

Skills and Abilities
Strengths: She is very powerful, large, and strong. She is also a very full-though thinker, thinking everything through to the end, and has good knowledge of puzzles, though battle strategies and sciences or math she is lacking. She can use most weapons she builds well enough, and can learn any other weapon with ease.
Special Abilities: She has a resistance to heat nearly equivalent to that of Firewings, though not quite as strong. She also has a very hot breath, a beam of light that she can use as long as she's had her share of time in the sun, and can use it as often as she wants unless there is a lack of sun. In other words, she's solar powered.
Weaknesses: She hates water, and not particularly bright when it comes to some things. When not exposed to heat, fire, or sunlight for a while, she grows weaker and her light-beam doesn't work.
Combat Style: Depending on the situation, she'll switch from slight planning to full-out attack, her massive strength giving her the ability to do so.

Background
History: Not much to tell. She was born to rogues who gave her to the Lightwings ("gave" meaning dropped her off by their palace) and raised with a fairly normal life.
RP Sample: Sparks flew in the dim light as the dragoness pounded on the metal with a tool she had made for this purpose, her features highlighted by the glow from the weapon she worked on. The weapon's shade of orange grew darker, signifying it growing cooler, and she pulled back her head. A burning beam of light shot towards the weapon, heating it again. She turned to the small creature next to her, whose dark black eyes reflected the light with a strange fascination. "Blaze." She said, and the small salamander-like creature looked up at her. She nodded, and it scrambled forward, puled a few coals from her forge and brought them back, its small size making it easy. She smiled to it, and returned to her work. She pounded on it a few more times before studying it, then turning and dunking it into the pool in the back of her cave. She withdrew it as the water steamed and admired her work. She smiled. The leaders would be happy with this one. 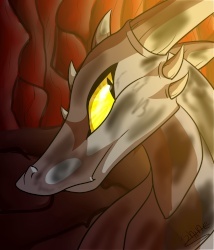