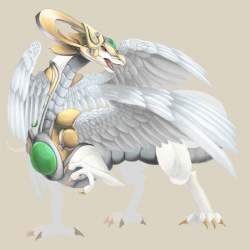 Personal Info
Name: Lucian
Alias: Sometimes called Lucy (By Devi)
Age: 46
Gender: Male
Personality: Lucian is a dragon who is not very fond of being in the company of many. However, as soon as he is around a few, he opens up to others, revealing himself to be a very nice and talkative dragon. He is somewhat protective towards all he calls his friends (and maybe later on his family). However, when standing in front of a larger group, he becomes most of the time silent, not showing anything of the dragon he was before. In these times, he tends to take a few steps back, trying to not be the center of attention due to his fear. Overall, he is a nice dragon to have as company.
Interests: Flying through the air at Sunrise and Sunset, Bathing in sunlight, Reading the old scrolls of the archives
Dislikes: Nightwings, their territory, the night, darkness and all connected to it in general
Fears: Lucian has "stage fright", he is afraid of talking in front of many people. He always tries to avoid being the center of attention.

General Appearance
Height: 44ft
Scales: Soft, white scales while hard, silver scales on the underside.
Eyes: A vibrant red
Appearance: Lucian does not carry weapons, but is always seen wearing some kind of armor. This is the "ceremonial" armor his father gave to him as a reminder. It's golden on the front, silver on the back with two large emeralds, one on the headpiece, the other on the chestplate. His wings aren't scaled, rather they have feathers.

Skills and Abilities
Strengths: His strengths mostly include good planning and leadership qualities. When it comes to fighting, he is never one to engage in close combat. He despises pointless fighting and always avoids fighting against other dragons. However, if he has to fight, he will always fight from a distance since he has to charge his abilities.
Special Abilities: His abilities depend on how much light he has stored inside him since his wings can absorb light of any source. The more he uses his abilities, the more his white skin turns grey and he becomes weakened.

Light of Intervention: A rather unique ability involving the emeralds on his armor. He releases an aura of green light that weakens any projectiles lessen the impact of these on Lucian of other allies.. He can also create a shield of the same light to defend him and others against any projectiles, weakening those which pass the shield. This ability cannot be used offensively.

Light of Restoration: As a Lightwing, he has the ability to use light he stored inside him to heal minor to major wounds, depending on the amount of light used.

The Culling: While in midair, he can unfold his wings to release several small orbs of light. He can fire these orbs all at once or one after another, making this some good power to use against more than one
foe. However, this uses up at least half of the entire light he had stored.

The Purifier: Instead of releasing several small "bullets" of light, Lucian can instead focus almost all the light inside him in a single beam, mostly used to end a battle. This beam is not lethal as it does not turn things to ashes. However, it will leave most of the time severe burn marks and, in rare cases, is known for leaving dragons blinded.

Weaknesses: Lucian does not have one weakness, but two. For one, he can't fight in close combat. His body isn't made to fight with his claws since it is rather soft, compared to other dragons, and very easy to inflict wounds on. For two, he is very dependent on light. If clouds cover the sun, if he hadn't had enough time to store light, he can't properly fight, simple as that.

Combat Style: As aforementioned, he does not engage in claw-to-claw battles, but rather stays in the back lines, being more of a supportive than a real fighter.

Background
History: Later
RP Sample: You know how I write in topics.

It's a very nice card. I'm sure you'll be a good leader

there is only a issue.

Light of intervention looks to be too strong. What lucian can do is to take less damage. Being able to stop any projectile is a no.