Personal Info
Name: Koal
Alias: N/A
Age: 38
Gender: Male
Personality: Koal is caution and sometimes quiet toward others until he gets to know them. Once they gain his trust he shows that he is friendly, protective, and sometimes playful, but he has a bit of an anger issue and will get mad easily especially anyone who posses a threat to him and his friends. His mood and attitude changes similar to that of an animal with his tail lashing softly along with his teeth and fangs shown, he would even snort smoke and breath bits of fire to show that he is stronger.
Interests: Snow, Rain, Meat, Sparring, adrenaline rush, Swimming. Yes, I know, Koal is a bit of a oddball, he uses fire attacks and yet he enjoys the peaceful sounds, sights, and the feel of rain hitting his scales and swimming through the cool crisp waters and the fact he loves watching the snow drift down and playing in the snow.
Dislikes: Bullies, anyone who wants to harm the innocent, evil beings, vegetables, any food from the sea (Fried Shrimp would be an acceptation to him).
Fears: Losing his loved ones, being weaker than the enemy.
General Appearance
Height: 60 feet in length from head to tail and 25 in height if you measure from his head to the bottom of his wing-like claw.
Scales: Red and Black
Eyes: Red
Appearance: Drawing above is pretty self explainable.  But incase you don't know, koal's chest and belly have scale-plates, Koal's body is also a higher temperature than the average dragon. Therefore, it helps him get dry faster.

Tribe Information and Status
Tribe: FireWings
Rank:  Guardian, FW Demi-God
Family: Mother and Father expired due to age and Koal does not have any brothers/sisters. He was an only Dragonet (A word for a younge dragon)
Mate: Ella The Earth Dragoness
Hatchlings: N/A

Skills and Abilities
Strengths: Physically strong due to his past fights/training, his legs, wings, and tail have most of the physical strength.
Special Abilities: Koal is capable of breathing fire, including manipulating it with his body, such as igniting his tail for a fiery whip lash and flaring up his wings to let loose a flaming gust. Any attack is possible with this ability as long as its physical and projectile. Koal is resistant to fire and can often by healed by it in a small amount. Koal has the power to access a speciel powerful form known as Flare Ascension by going through small progress by encasing himself in liquid magma, the magma cools down to seal himself inside of molten rock, the pressure from being inside of it transforms him into a Demi-god, altering his arms-wing to turn into shields, the shield-arms willl sprout long thin transparent wings that will allow him to levitate instead of having to flap them, the rest of this transformation changes his scales to a brighter orange, they almost look like his fire is shining through cracks in his scales, Koal's body also thins like a little bit, reducing his width but increasing his height by 15 feet more. While in this form, now only does his strength and speed increase by an unknown amount (yet to be determined just how strong he becomes, but I don't want to go overpowered, but I'd like to aim for the form to be powerful but not unstoppable). But the form also allows him to have more control over the element of fire in both offensive, defensive, and conjuring methods, but despite gaining more control over fire, he cannot control fire created by other FWs, but he's capable of taming a wildfire to a certain degree, but not the wildfire of a huge forest.
Weaknesses: Despite having strong wings capable of fast flight, the wing web parts of his wings can be damaged by pierce weaponry such as arrows. Once damaged, he cannot fly. Koal is also slow and less evasive on then ground, forcing him to fight more on the aggressive side, not unless he transforms into his demi-god form, half of the speed weakness is solved.
Combat Style: Koal is a smart but caution fighter, he studies his enemies at first with normal physical attacks. Once he has learned anything about his enemy, he will go on the aggressive or defensive side.

Background
History: N/A but I will add something here depending on what happens to Koal on this forum.
RP Sample: It was a bright sunny day and the wind was blowing softly through the grass plains, it was causing blades of grass to sway to and afro. The birds were haply chirping away and sharing a conversation in this own unique language. The peace was soon interrupted as a shadow swiftly passes by. The birds suddenly scattered trying to get away from whoever it was that just flew by. The figure soon turned around and landed, its back feet first to touch the screen before its wing-like arms landed next, the figure was a red dragon with black plate-like scales along its chest and belly. It was a wyvern dragon with impressive wide wings, its dragon's head had four horns and black markings along its face. Its hair was spikey red and black with a ponytail to complete the hair's style. It was none other than Koal, a newcomer to those lands. He had just landed so he could relaxed from his long flight here. 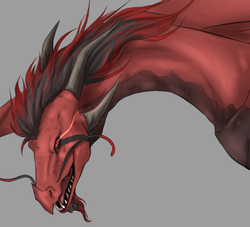 Re: Koal The FireWing

I read there's WIP. Write here when you have finished, so I can approve it

Re: Koal The FireWing