Serafina, Dragon of the Skies

Serafina, Dragon of the Skies

Insert Image Here
Personal Info
Name: Serafina
Alias: Sera
Age: 19
Gender: Female
Personality:
Serafina is quite independent preferring to be alone among the clouds then in a crowd. She is a proud creature, with a honest and friendly nature. She is forgiving but it depends on how much you push her. If something catches her interest she will be very enthusiastic about it, for example bird watching or trying to shape clouds.  But at times she can be reckless or impulsive , which has lead to a few sticky situations in the past.   If pushed to far Sera can have quite the temper, so it's better to avoid annoying her too much or waking her , especially if she was in a bad mood before sleeping.

Interests:
• Singing
• Bird watching
• Playing among clouds and trying to shape them
Dislikes:
• Being annoyed or woke up by others
• Confined spaces
• Large crowds
Fears:
• Her wings being trapped in some way and not being able to fly freely

General Appearance
Height: 26 feet
Length: 45 feet
Wingspan: 68 feet
Scales: Orange, yellow
Eyes: Mint Green
Appearance:
Serafina has 3 different scale types over her body. The smaller random pebble like scales that cover most of her body are a tangerine orange. The more diamond shaped scales are a brown colour and the third type of scales is like those from a snakes belly which are a pale yellow colour. These pale yellow scales line her chin, neck, belly and bottom of her tail. She has mint green eyes with a silted pupil.  She has a multitude of spikes and horns on her head and long her spine, these are also a pale yellow in colour. Her wings consists mostly of long bones and membranes but the tip of her wings consist of 5 large feathers with smaller feathers along the main bone of the wing to the middle joint. These feathers are slightly darker then her tangerine scales. Her tail tip is also covered in feather forming a thick pointed fan shape. These feathers can stiffen and become a razor sharp weapon that she can use in both air and on the ground. Her impenetrable wings act as her only true defense as her scales are quite soft compared to other dragons.  Sera is missing her front right leg as a result she uses her wings to move on the ground. These wings have a curved spike on the second joint of her wings. She dose have large scars across many of her scales were attacks have gotten through her wings, some were even almost fatal such as the large jagged scar along her side the wraps around under her belly.

Skills and Abilities
Strengths:
• Serafina is strong willed, she needs to be.
Special Abilities:
• Her large wings can be used as a shield as they impenetrable to claws, teeth. She can block magic but it still effects her. Her wings aren't as all powerful as they seem, sure they can block almost anything but pin her wings even just one wing or wear her down or simply barge her of off balance and she can't block well enough to avoid getting wounded, which can get quite problematic due to the softer nature of her scales which can be compared to skin. also there is a weak spot at the base of her wings which she can't cover when using her wings, so if attacked there she can't defend and another is the feathers on the tip of her wings the area around and under the feathers is also a weak spot that can't can't use fer defense. Her wings aren't as effective against the dragon gods.
• The feathers on her wing tips and tail can stiffen to be a razor sharp weapon.
• She can control the wind  which adds to her range of the feathers on her wing tips and tail, other then that she mainly uses it to shape clouds

Weaknesses:
• She is missing her right front leg. As a result Walking and defense on the ground is difficult, which leaves openings if she is attacked
• As she uses her wings to walk in dangerous situations when she not in the air can lead to slow reaction to get her wings around herself.
• As a result of her wings being impenetrable, her scales are softer then normal and shes not as strong.

Combat Style: She tries to remain in the airborne in a confrontation. She would make use of her wings and tail as best she could to either fight or get away depending on the situation. She is not very strong in fights and as such if an attack is strong enough it will still damage her as once past her wings shes got no other defense.
Background
History:
As a hatching her family was attacked by rogue dragons. While her parents had been distracted, another dragon grabbed Sera by her right front leg, as she struggled to get free, the rogue took off with her. Sera barely a week old used her tail feathers to attack the hand of the dragon but missed and  instead severed her own leg as she was not very coordinated at the time. Her father caught her after he had seen her fall. After that the next few years was a blur of learning and adapting to walk using her wings. Sera would watch any birds, so that she could see learning their flight patterns and at night she watched bats particularly when they landed to see how they moved on the ground. Even through she lacked a leg, with her strong will and her parents Sera had learned to move with ease on the ground and in the air. She took up a hobby of shaping clouds which trained her to use her control of wind better and it help to increase her skills with using her feathers as weapons.  Because Sera relies heavily on her wings anytime they got trapped she wold start to panic until they were free. As a result she started to avoid cramp spas or large crowds even if she was quite prideful she was ashamed to be missing a leg and as soon as she could fend for her self she left her family behind. She preferred the freedom she gained and tended to stay in the air unless she needed food, water or sleep.

Some time after she left her family behind she was once again attacked by a pair of rogue dragons. The same ones that had attacked when she was a hatching. She had been in the air but they forced her to land by driving her towards the ground. Once on the ground she wrapped her wings around her body to protect it. Under the constant attacks her wings gave way not being able to hold up against them. One of the dragons pinned her one of her wings allowing for the other rogue to attack again. This time a large jagged gash was torn into her left side and underbelly. Sera thought she would have been killed if another dragon hadn't stepped in and chased off the rogue pair and kept her safe also taking care of her wound, Sera would have been dead.
RP Sample:
Serafina glided above the clouds with her eyes closed. She felt the wind using her small amount of feathers to keep flying straight. Sera felt calm there above the clouds as if she were free from all troubles that life included. No matter how much Sera wished to remain in flight her thirst had started to creep into her throat. With eyes now opened, Sera spotted a stream and flew down towards it.

Sera landed on her hind legs before she brought her wings forwards to transfer her weight onto them and her left front leg. She used her wings and walked to the rivers edge to drink. Sera dipped her head into water and took large mouthfuls of water before she lifted her head and looked back at the sky. Her mint green eyes shone with her love of the freedom the sky and her wings gave her.


I hope she is good, if anything needs to be changed let me know and i will change it

I will upload a picture when it's finished. 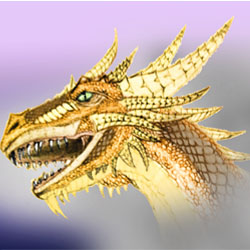 I'm afraid I'm going to have to pull this out of approval.

"Her large wings can be used as a shield as they impenetrable to claws, teeth or magic."

This is a no can do. I mean with this not even the full gods themselves can hurt you. Do I really need to go into detail about why that can't be allowed? Please greatly reduce this.

Hmm can they still be impenetrable to physical attacks and be able to block magic but still get affected. if a dragon was much larger then her she would still get crushed and she clumsy once on the ground, so using her wings for both defense and movement are very difficult which would give anyone an opening... in the sky they are used for flight and minimal blocking if any at all.
I did tried to compensate for the wings with the missing leg and soft scales... also she not that strong so it would be easy to just grab her wings and move them out of the way - reason she fears her wings being pinned


Edit: i edited a few things in her combat and abilities and weaknesses and appearance and history, i'm trying to make the wings less powerful then what they seem to be, but let me know if there's anything else i can do, as i don't really want to down scale the defense of her wings cause it balances with her soft scales and missing leg.