Grima was eating in the forest during late afternoon. She had just caught a deer and was almost finished with it, even though she just caught it. It had, for whatever reason, strayed from its group and starting walking into a section of the forest unknown to her. As she took her last bite, she decided that she'd explore the area a little bit to see what was up. For a while all she saw were the normal things you'd expect to find in a forest, like trees, rocks, and small animals, but eventually she came across something that seemed very out of place. Right there in the middle of the forest only a few feet away from where she was standing was a giant stone building. It seemed ancient and had a creepy essence to it as there was all sorts of plants that were growing on it, leaving little room for opening for a dragon or light to get in. She walked around the edge to see if there was any good place to go in, but she found none so she decided to just burn off the plants that were blocking the entrance. She walked back to the front and sawfly burnt down all of the vines that stooped her from entering with her magic, and stepped inside.  With the entrance now wide open, there was plenty of light to see the inner workings of the temple. There were fancy columns at the sides of the walls that were etched with words of a different language than any of the ones she knew and what seemed to be a story of some sort told through sculptures. In the sculptures there were people and dragons alike, which she thought was very odd. She wondered if the words had to go with the story seemingly told in the sculptures. She looked around the empty room to see that this art was carried through on all of the walls in the room. She walked over the the front of the room and turned back to face the entrance. It felt like this was someone would stand if they wanted to talk to the audience that would probably sit in the are where she was standing earlier. Now that she thought about it this room kind of looked like a church of some sort. If she was right about that, then what the creatures that came here worship? She thought maybe she could solve this mystery if she explored deeper into this giant building. She started walking to where she saw the entrance to the next room, but decided to swing by the entrance first. Maybe this wasn't such a good idea. She could get lost or something, and that would be terrible. She looked around the forest outside and decided that she had to answer a few questions she had. It's now or never, I guess. She turned around and took a deep breath in preparation for what may be a long and hard journey ahead of her.
_______________________
Amita's character (theme) song: 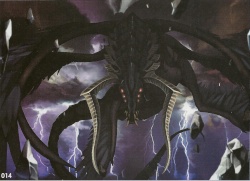