Latest topics
» My reasoning
by Bassasail Today at 4:39 pm

Personal Info
Name: Overcharge
Alias: Charge
Age: 25
Gender: Male
Personality: Overcharge is a fast thinking, ambitious tactician in movement. He moves fast, he talks fast, the only thing he doesn't do quickly is sleeping, of which he could be asleep for hours on end. Can be seen to be arrogant at first glance, but when you get to know him, he's a great friend that would do anything to help. He always tries to lighten the mood, being a trickster at heart.
Interests: Racing, hunting and Showing off
Dislikes: Waiting, Hostile actions and Being woken up. (also, Queues

Skills and Abilities
Strengths: Fast, Use of major agility. Quick Reactions and situational awareness.
Special Abilities: Can fire a concentrated beam of electricity (Lightning Shot) from his mouth once every 6 hours.
Weaknesses: Low defence, he relies more on his agility to avoid damage, Sometimes shows off too often.
Combat Style: Focuses on Speed and quick strikes, if needed, uses his Lightning shot to finish off opponent.

Background
History: WIP
RP Sample: He deftly dodges the ballista's arrow and catches it in one of his back claws. "Haha, they never expected that!" as he flung his legs around and hurls it back to home. The Arrow successfully destroys the deadly machine, but the humans fled unharmed. 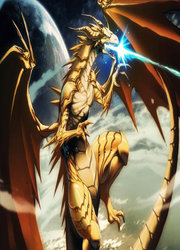 Re: Overcharge - The Dexterous